Covered with Night: A Story of Murder and Indigenous Justice in Early America 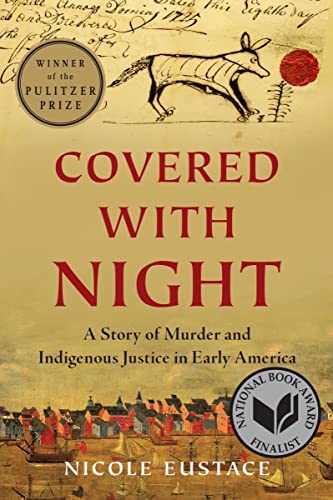 Even the most obscure events in history have their own story to tell for posterity’s edification. In the case of colonial America, there is still much to be gleaned if someone takes the time to search in archives, government records, and personal documents as author Nicole Eustace has done. In this instance, there is not only the story itself but also a cross-cultural lesson to be learned regarding relations between the early Pennsylvania colonists and their Native American neighbors.

The title refers to the indigenous perception that murder covers the community with darkness at the loss of one of its own and the necessity of replacing that member either with someone from the murderer’s community and/or providing some sort of reparations or compensation for the loss of the deceased’s presence, community standing, labor skills, food provision, etc.

Indeed, there was no expectation of justice or punishment in the Western legal sense. Such is the thesis behind this story where a Native American man, trading with two Pennsylvania brothers, was murdered, and the overarching efforts on the part of the colonial government were not only to determine possible guilt and punishment but also to head off a possible war and continue to maintain current trade, land acquisition efforts, and friendly relations between the neighbors.

Lacking knowledge of (or ignoring) the Native mourning and condolence ritual and ceremonial system, the colonial governor also found himself engaged in dealing with the governing council and wider community’s intrigues and machinations among themselves and the Native Americans as well in the ongoing efforts to provide resolution to what the colonials described as an “unhappy accident.”

Lost in the concern of maintaining their own ultimately tenuous land holdings in William Penn’s colony while the colonists were trying to avoid any possible “Indian troubles,” it was the various members of the so-called Five Nations who were largely left out of the equation despite the efforts made to include them and consider their attempts at diplomacy.

Without revealing the result of the legal case, there was one other outcome which has had its own implications right down to today: The Albany Treaty of 1722 also known as the Great Treaty. The author describes it as “the oldest continuously recognized Indigenous treaty in Anglo-American law.”

It not only is a record of later land cessions and claims, both colonial and under the United States, but also memorialized the previously referenced Indigenous condolence ceremonies, and requested the release of the alleged murderers, recognizing Native American “principles of restorative justice embedded in balanced values of pluralism and communalism” in which lies the culture clash described in the text.

Interestingly, much of the text format is in the present tense. The author primarily describes the initial events as they occurred, as if they are happening in the moment in a blow-by-blow account, providing a “you are there” experience. This makes for a more interesting read as opposed to a this-is-what-happened narrative.

Furthermore, this book’s overall format is how a nonfiction work should be presented. Properly footnoted throughout, it contains endnotes which provide additional information and context, a formal bibliography, acknowledgments, and index. The bibliography demonstrates that there are still many extant primary source documents of the colonial period, in addition to secondary ones, which enable historians to weave a story as told here.

Interspersed throughout the text are illustrations of documents, personal portraits, and drawings of homes, structures, and the contemporary layout of the city of Philadelphia. There is also one map of eastern Pennsylvania in the front of the book that shows the many, largely Native American, trails and “roads” which wound their way west to the Susquehanna River in addition to the various relevant points referenced in the text.

There is much here for readers to digest and history lovers, certainly, to appreciate in the way of a good and well-told story.

Finally, it bears repeating that this is not just the story of a murder case, which is somewhat of an anti-climax actually, but a comparison of how differing cultures and belief systems can conflict, especially when certain religious and racial superiority attitudes should happen to rear their ugly heads. It clearly shows how presumption and ignorance can affect even the best of intentions.