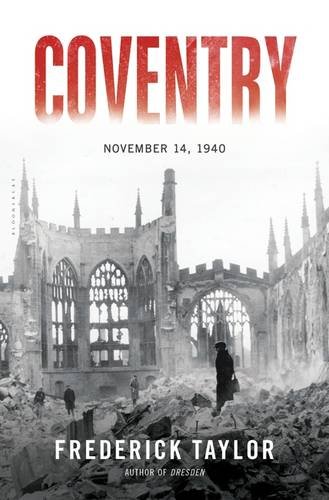 In the six-year history of World War II, there were few events that struck more fear in the hearts and minds of participants than the indiscriminate, so-called terror bombing of civilians and non-military targets for the express purposes of breaking morale and eliminating an enemy’s labor force or at least making it homeless. This particular history is replete with such well-known names as Rotterdam, Dresden, Hamburg, and Tokyo.

Although the Battle of Britain is familiar to most, what may not be is the destruction of the City of Coventry (of Lady Godiva fame). As an integral part of Britain’s industrial capacity and, therefore, war effort, it was a target ripe for the attentions of the Luftwaffe. Given the proximity of workers’ homes to their place of employment, Coventry was doubly vulnerable, in spite of anti-aircraft defenses and the available fighters of the Royal Air Force (RAF).

Author Frederick Taylor describes the setting and the run-up to this event which left surviving Coventrians traumatized, as one would expect. Indeed, he covers everything from “shadow factories,” a scheme to increase tool and aircraft production to match expected German aircraft numbers, to increasing the sources of water necessary to combat fires resulting from bombing (which, in the event, were insufficient to prevent the city’s eventual destruction).

One of the more enduring controversies of the event was whether the city was sacrificed to the Germans in order to prevent any suspicion on their part that the British had cracked their codes, which actually was the case. The British were aware that a big raid was coming elsewhere following the multiple attacks on London but, in spite of having garnered the intelligence and experienced some nuisance raids on the city, it still took some effort to determine German operational intentions, the date, etc.

The Germans, for their part, had switched to nighttime bombing missions following considerable daytime losses to the RAF and, to increase their accuracy, had developed a triangulation system, Knickebein (Crooked Leg) through the use of electronic beams to guide their bombers; however, the British were able to produce countermeasures to disrupt the enemy air fleets before the Germans re-countered, prior to the massive raid on November 14.

As it turned out, the Germans actually planned the mission for three waves, necessitating an essentially maximum effort, all-night attack to produce, in modern parlance, shock and awe. Coupled with this was the use of not only high explosives but delayed action bombs, aerial mines and, worst of all, incendiaries. This combination was sufficient to overtax any efforts by the British to contain the numerous fires which developed and overwhelmed their firefighting services.

As it was, the city endured considerable devastation, including that of the famed 14th century Cathedral of St. Michael’s, which ruins were left as a monument to survivors and future generations—and the iconic photograph of which graces the book’s cover—along with many industries and homes.

In spite of this firebombing, surprisingly, casualties were relatively light, with some uncertainty and dispute as to the actual numbers. In any event, Taylor has done well to access memoirs and conduct interviews of survivors, quoting extensively from these to provide context to the horror and psychological trauma suffered by the city’s inhabitants.

In an effort to mitigate morale loss, the city was almost immediately paid a visit by King George VI whose standing among his subjects obviously rose much higher as a result. At the same time, immediate plans were made to rebuild the destroyed factories, facilities, and other industry in order to get these back up and contributing to the war effort. Unfortunately, residents were forced to double up with those who still had a home to which to return or else find shelter outside the city in nearby villages.

Survivors did rebuild postwar, but the city hardly resembles its previous appearance, and it became a badge of honor to be able to say that one had survived the bombing.

This volume contains maps, notes, a bibliography, and an index. The author cited not only the aforementioned interviews and memoirs but also various British and German perspectives, official archives, websites, newspapers, biographies, and eyewitness accounts. It is obviously well researched and well written.

Coventry’s demise stood out as an early example of terror bombing and, certainly, a foretaste of what was to come a few years later. Frederick Taylor has brought that experience to the forefront in an engaging volume.