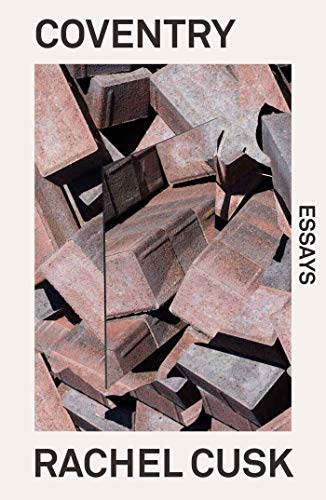 “Coventry marks a return to a more conventional style of writing, yet retains that same sense of an alert, engaged intelligence, negotiating the complexities of women’s lives and identities in our present moment.”

“My husband,” Rachel Cusk writes, reflecting on the events that led up to her divorce, “believed that I had treated him monstrously. This belief of his couldn’t be shaken: his whole world depended on it. It was his story, and lately I have come to hate stories. If someone were to ask me what disaster this was that had befallen my life, I might ask if they wanted the story or the truth.”

This dichotomy, between the fictions we compose about our lives—the specific lens through which we chose to view them, and the truth, is a recurring theme in this incisive, sagacious collection of essays. Reading through them offers the pleasure of watching Cusk’s mind at work as she confronts and digs deep into the psychological dynamics underlying subjects such as driving, rudeness, notions of “home,” and the “silent” treatment (which in England is called “being sent to Coventry”—hence the collection’s title) a piece in which she examines her troubled relationship with her parents. Like variations on a theme, these essays contrast accepted mores and modes of behavior with the angrier, rawer, truer feelings that we are excepted to keep concealed.

“When my daughter was smaller, and invited friends home,” Cusk recalls, “I knew I had to provide a narrative explanation of what the afternoon would hold. I made the world known to them by description; almost as if by describing it I created it, or at least maintained control of the narrative: I am mother, you are children, this home, teatime, play. Sometimes I couldn’t bear the conscription of language to this phrase book of false cheer and uniformity . . . what was clear . . . was that these social rites were a fulcrum of storytelling . . . I saw all of us, to a degree, as indoctrinated. In this sphere of universal values, I tried to keep hold of the thread of individuality, yet despite the irritants of this mass religion, the alternatives were unclear.”

Cusk’s journey as a writer charts a steady evolvement, from writing fiction (Cusk was nominated as one of 20 “Best Young British Novelists” in 2003), to memoirs exploring her experience of motherhood and divorce (whose forthright accounts evoked angry accusations of self-obsession, pretentiousness and child-hating), to the publication of a much-acclaimed trilogy of novels which a reviewer for The New Yorker described as a style in which “fiction merges with oral history.” It employed a unique style of storytelling, in which the protagonist serves primarily as a sounding board for a host of characters who share their concerns with her, creating both a multi-voiced collage and a whole that is greater than the sum of its parts.

Coventry marks a return to a more conventional style of writing, yet retains that same sense of an alert, engaged intelligence, negotiating the complexities of women’s lives and identities in our present moment. This is especially apparent in the second and third sections of the book, in which Cusk meditates on art, feminism, religion, language, literature, and the unique problems facing female artists and writers in their struggle to create.

The works through which she chooses to explore these ideas are varied and sometimes surprising. In “I Am Nothing, I Am Everything,” for example,  Cusk, who attended a convent school as a child, writes of a visit to the Basilica di San Francesco in Assisi, encountering it both as a place of religious veneration, and a site of Italian art. In Eat, Pray, Love, she turns her attention to the bestselling novel, attempting to analyze the reasons for the book’s success. “Women like this literature,” she concludes, “because it alleviates feelings of pressure without the attendant risks of rebellion or change. Nothing is lost or destroyed or interrogated by comedy, or at least not literally.”

Yet ultimately, what makes this well-crafted collection worth spending time with is Cusk’s voice: sharp, articulate, intelligent and honest. Brutally honest, but in a way that opens new horizons of thought and shows us the world from fresh perspectives.