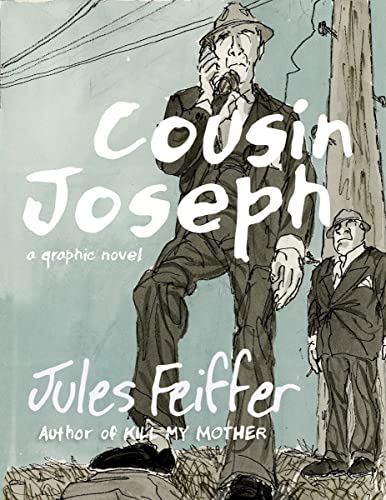 “Cousin Joseph is a nostalgic treatment of a bygone era and a good read for those comfortable with the guardrails of its genre.”

In the darkest corners of a dark city the prevailing gloom of the Great Depression is lightened a little by the booze at Addie’s speakeasy and the incorruptible Sam Hannigan—a gruff saint in a city of jovial sinners. This is the set-up of Cousin Joseph, the second in a trilogy of noir graphic novels from Jules Pfeiffer.

As with so many graphic novels, the contents of Cousin Joseph are largely derivative of previous storytelling—in this case borrowing liberally from the gumshoe and gangster movies of the 1940s. Sam Hannigan has a lot of Humphrey Bogart in him; he’s even drawn with a resemblance.

Other characters and plot devices also borrow from old noir dramas. An old friend is pitted against Sam until their friendship overcomes the circumstances that divide them. An aging partner seeks to stay out of trouble until he can leave the force. An “old broad” barkeep drinks as hard as the men. A malevolent industrialist provokes a strike.

However, liberated from the censorship that handcuffed the writers of Bogey’s scripts, Pfeiffer is able to fully develop characters and plot devices that would have been left on the cutting room floor in the 40s. This permits Pfeiffer to build subplots around anti-Semitism, red-baiting, and sexual promiscuity in ways that could only be hinted at in the old black and whites.

Cousin Joseph is mostly but not entirely derivative. Pfeiffer deviates from Gumshoe clichés in a few interesting ways: He avoids the shapely femme fatal and the old mentor stock characters. Good does not triumph over evil at the book’s climax. The absence of these clichés doesn’t diminish Cousin Joseph.

Pfeiffer has also packed a lot of salty language and testosterone into Cousin Joseph, including a half dozen fistfights and a couple of murders. He also provides a sprawling ensemble cast with interwoven past lives. Small flourishes of political and social commentary on the time period round out the reader experience.

It is quite an accomplishment that Pfeiffer is able to offer all of this in a brief graphic novel that can be read in two sittings. The tradeoff is that Cousin Joseph remains very much limited by the parameters of the graphic novel—long on melodrama and plot, but despite its pictorial format, short on real imagery or complexity.

The other limitation to Cousin Joseph is that it is the middle book of a trilogy. The character, Cousin Joseph, is lightly drawn and peripheral. Readers only know that he is consumed by a strange jingo-patriotism and that he has powerful connections. Presumably, readers will have to wait for the third book to learn more about him.

In total, Cousin Joseph is a nostalgic treatment of a bygone era and a good read for those comfortable with the guardrails of its genre.