The Course of All Treasons: An Elizabethan Spy Mystery 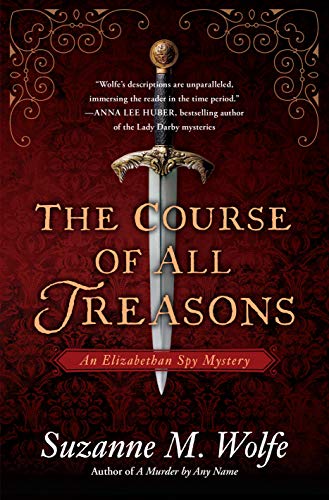 “Those who enjoy a mingling of historical fact with fiction, the intrigue of the Tudor spy network, the disparate splendor and squalor between the Elizabethan Court and the common world, and the desperation of Nick’s personal plight will find The Course of All Treasons a worthy second entry in this series. “

Robert Devereux, the Earl of Essex, is back from Holland where he’s been representing the queen in their war with Spain. It’s not by choice, however, for “Apparently the Dutch told Leicester that if he didn’t curb his stepson’s excesses, they would assassinate him themselves. So Leicester sent him home to the court, carrying dispatches for the Queen and told him not to hurry back.”

The queen’s current favorite isn’t liked much better in England. Soon after Essex’s return, one of Her Majesty’s spies is tortured and murdered.

The man is one of Sir Francis Walsingham’s agents, but Essex claims his own men are now in danger.

“It had been the talk of the court when Essex announced he was establishing his own spy network to work ‘hand in hand’ with Walsingham’s.”

In actuality, it’s merely another instance of his jealousy of Robert Cecil, aka The Spider, with whom Essex has had a rivalry since boyhood.

Because of his expertise in finding the murderer of one of Her Majesty’s ladies in waiting the previous year, Elizabeth orders Nicholas Holt to investigate.

Nick is a reluctant spy, coerced into Walsingham’s network.

“Despite the risk of losing everything including their lives, he suspected his brother and mother still practiced their Catholic faith. Nick sometimes woke from a nightmare of torches flickering on the stone walls of the Tower while the screams of his brother, sister-in-law, and mother echoed in his ears.”

That’s their promised fate if Nick doesn’t cooperate. Cooperate he does, but his investigations only make him the target of a deadly attack intended to establish his own guilt. “I’m caught between a rock and a hard place. Cecil thinks Essex tried to have me killed; Essex thinks Cecil is killing off his own agents.”

When a fellow spy is attacked, Nick has to call on his friends Eli and Rivkah, twin brother and sister. Eli is a doctor who ministers to the poor as does his sister, but since no woman can be a physician, she does it secretly.

There are hints that the Spanish are complicating the problem when a new character entered the scene. Annie O’Neill seems to have thrown in her lot with the Spanish, and she’s definitely been behind one of the attacks on Nick, but does she have enough skill and cunning to be the one trying to bring down Walsingham’s network?

“What’s your take on Annie?” Nick asked.
“She’s utterly ruthless,” Robin smiled. “I like her.”
“So you think she’s capable of acting as a double agent?”
“If the Spanish promised to restore her father to the High Kingship of Ireland, anything is possible.”

When Nick’s friend John, manager of the tavern Nick owns, is injured and left in a coma, Nick’s fury send him searching for the final clue that will close the case, even though he’ll have to use his own brother as bait in the trap to catch the spy killer.

Most readers may know the Earl of Essex only as Queen Elizabeth II’s favorite after Sir Robert Dudley. Because of that, author Wolfe’s characterization of him may come as a surprise to some, though as explained in the Afterword, it is all factual.

Nick’s world crosses the boundaries of rich and poor, though he seems more at home in the poorer sector, in spite of being a noble’s son.

The sights, sounds, and smells of Tudor London are everpresent in this story as they were in the previous A Murder by Any Name. Most of the characters in that tale also reappear in this one, with a young playwright named Will Shakespeare wandering the periphery, tossing out one-liners that will eventually become the titles of his plays.

What would any Tudor story be without at least one appearance of the young, as yet undiscovered, Bard?

There’s also more progression of the attraction between Nick and Rivkah, at last finally acknowledged, and made all the more poignant by the knowledge it can lead to nothing but heartbreak, since Nick is Christian and Rivkah is Jewish.

As for Annie O’Neill—in her, Nick may have met his match, spy-wise. She’s a character begging for a second and third appearance.

Those who enjoy a mingling of historical fact with fiction, the intrigue of the Tudor spy network, the disparate splendor and squalor between the Elizabethan Court and the common world, and the desperation of Nick’s personal plight will find The Course of All Treasons a worthy second entry in this series.