The Courage to Act: A Memoir of a Crisis and Its Aftermath 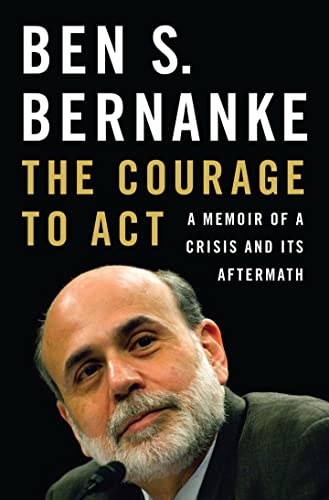 Seven years after the cataclysmic events of fall 2008, when the global financial system all but melted away, we have the testimony of the last of the key decision-makers during that crisis: then-Federal Reserve chairman Ben S. Bernanke.

In The Courage to Act: A Memoir of the Crisis and its Aftermath, Mr. Bernanke joins Timothy Geithner, the man in the trenches as the head of the New York Fed; Sheila Bair, who ran the Federal Deposit Insurance Corp.; and Henry Paulson, George Bush’s Treasury chief—all of whom have published toe-stubbing memoirs about their activities during that period. All should now be clear.

Yeah, and I have some subprime mortgage-backed securities to sell you.

Mr. Bernanke’s door-stopper—the text runs to 583 pages—is a long if pleasant read. He writes clearly and accessibly. The virtues he displayed as Fed chair appear here: calm, patience, a very un-Greenspan-like modesty, a persistent if low-keyed realism. He is agreeable, if not particularly revealing; clear, if not gripping. He writes about getting interviewed on 60 Minutes, but he does not describe what it’s like to stare into the abyss when Lehman failed beyond that it “was a terrible, almost surreal moment.” Oh.

Mr. Bernanke was a stellar academic economist before coming to the Fed—his tone is patiently pedantic, as if lecturing snoozy, slightly dim students (or readers). He treads carefully, like a diplomat—or as a high-level bureaucrat protective of a precariously poised institution surrounded by demagogues and fantasists. He has good reason. The Fed, after all, is an institution that most Americans don’t have a clue about, and that many who do have an inkling believe is an agent of Satan.

Mr. Bernanke is not the face of evil. The financial crisis, including its prelude and sequel, was a period of market fear, panic, high anxiety, scapegoating, paranoia, and insanity, inflamed by ignorance and loss.

Mr. Bernanke is the technocrat in the typhoon. His memoir, for all its focus on that nightmarish stretch in fall 2008 when the dominos—real, not metaphorical—crashed (Fannie Mae, Freddie Mac, Lehman Brothers, Merrill Lynch, AIG, Washington Mutual), is bathed in a kind of soft retrospective light from the knowledge that he and the Fed eventually survived to tell the tale.

Many of the Fed’s responses, from swap lines to TARP to bank mergers to stress tests to quantitative easing, succeeded, at least provisionally. Sense won over nonsense (close call though). The Fed fulfilled its uber-mandate going back to Walter Bagehot, as lender of last resort. But it had to tear up traditional practices to do so, and it has taken central banking and global finance to a strange place.

Mr. Bernanke recounts this as if it were just another exam he needs to ace. His is a rich life blandly told. He was the son of a Jewish pharmacist in a small Georgia town during the high drama of the civil rights movement. From the start he’s geeky and smart: an academic whiz. He goes to Harvard. He discovers economics. He moves to MIT, a hot econ shop, then ends up at Princeton, where he becomes both a noted scholar of the Great Depression, and architect of a world-class econ department. (Mr. Bernanke modestly denies he had political experience beyond tenure on the local school board before the Fed. In fact, he was a masterful academic politician, which may be more difficult than maneuvering the Federal Open Market Committee.)

He arrives at the Fed—a moderate Republican appointed by George W. Bush—toward the end of the Greenspan era. Greenspan is already a legend, though Bernanke has some ideas about reforming Fed practice involving transparency and inflation targeting that Greenspan rejects. Mr. Bernanke waits. The complicity of the Fed in the growing bubble is complicated.

Bernanke does not foresee the crisis, which was not unusual. He does, at least in retrospect, recognize stresses building, as he recounts one FOMC meeting after another in 2007, divided between hawks (raise rates to deal with incipient inflation) and doves (lower rates to fuel job creation). But he downplays the real-estate peril, and doesn’t see its effect on a securitized, hot-money-financed Wall Street. By then, dovish Mr. Bernanke has replaced Mr. Greenspan.

Mr. Bernanke is not a blaming kind of guy. Yes, there were regulatory breakdowns, even at the Fed, though he does not delve into the concept of regulatory capture or the central bank’s long encouragement of bank consolidation that led to too-big-to-fail, or to questions about the evolution of the financial system, which the Fed is increasingly responsible for saving. What is done is done. He denies that the policy of lowering rates after the 2000 dot-com bust and 9/11 fueled the real-estate bubble. Bear Stearns? Had to be saved, setting up the dominos. He does not wrestle with paradoxes and complexities of that chronic phenomenon, bubbles, at all; Greenspan agonized over it more visibly.

During the crisis, Mr. Bernanke details shifting moods within the Fed, and Fed programs to settle things, but he’s not exactly novelistic. President Bush is remote but affable; his highest praise is that the president tells Mr. Paulsen and Mr. Bernanke to do whatever it takes after Lehman fell. Mr. Paulsen is frenetic and politically tortured; and he has a crooked pinky finger (from a football injury).

Mr. Geithner is quick, voluble, and smart — but not an academic. He likes Ms. Bair (Mr. Geithner doesn’t), but she’s overly worried about protecting the FDIC insurance fund. He finds most politicians two-faced, though he admires Barney Frank for his forthrightness. His experience with Republicans is so bad he leaves the party.

Cognoscenti will mine this book about episodes like the decision to let Lehman go. Alas, Mr. Bernanke leaves them crumbs. His story, which may be true but is less than satisfying, aligns with Mr. Paulsen and Mr. Geithner’s, and his own congressional testimony. Lehman’s Dick Fuld had been told to find a buyer; he failed, asking too high a price, until it was too late. The government tried to round up a buyer over the weekend, but failed, and by then the firm’s assets had eroded so badly they couldn’t be used for collateral in a bailout. Mr. Paulsen was concerned about moral hazard. Treasury lacked the legal power to save the firm—a mandate it would soon get. Time ran out. Mr. Bernanke recounts all this. What he does not discuss is why, knowing how troubled Lehman was, regulators had not developed a better understanding of its dense interconnection with global finance when they had the chance.

With the crisis calmed, Mr. Bernanke still has a few hundred pages to go: the aftermath. He recalls more FOMC meetings, a new administration, his reappointment by President Obama, the passage of Dodd-Frank (he generally likes it) and his PR campaign to preserve Fed autonomy. He’s busy and glad to retire in 2014. But he is simply not reflective, perhaps deliberately, too sensible and careful to takes us beyond what’s already known. He’s a nice guy in an insane age; a prudent man in a time of systemic irresponsibility. He was arguably the necessary man at the Fed, but not necessarily the right person to tell this mind-bending tale.