The Couple at the Table: A Novel 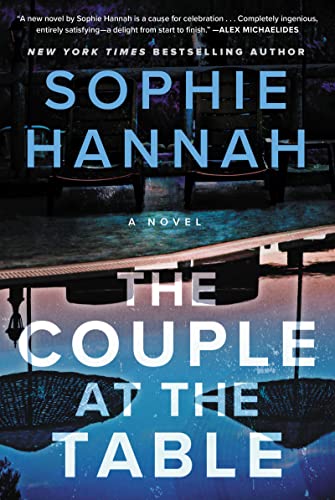 “Hannah’s major characters are well developed, the plot has some merit, but the writing is not tight and tends to wander, making for a confusing storyline.”

Sophie Hannah’s new novel, The Couple at the Table, while it presents an interesting plot, can best be described as somewhat confusing and at times difficult to follow.

While Hannah sets her protagonist as Lucy Gleave, the reader may question that choice, as other characters tend to barge into the lead character role throughout the story.

The story opens with a letter to “Dear Whoever Killed Jane Brinkwood.” An interesting beginning that moves on for six pages and gives a lot of background, perhaps some that could have been cut back.

So, who is Jane Brinkwood and why is Lucy sending this letter to a mysterious murderer? Well, Jane is the young woman who stole Lucy’s husband, William, from her while she was pregnant.

Lucy and her new partner, Pete Shabani, take a vacation to Tevendon resort at the same time that Jane and William are celebrating their honeymoon there. Totally a coincidence? One wonders.

And then the character population begins to grow—Anita, the resort manager, guests Polly and Jack McCallion; Caroline and Harriet Moyle-Jones; Susan and Mick Henry; and a mysterious couple nicknamed “Mr. and Mrs. Friendly,” who disappeared before Jane was murdered, but are still a curious couple.

Tevendon is a family estate turned into a resort that is owned by Jane’s father, Lord Ian, who plans to turn it into a full-blown hotel property. To say that Jane is angry that her husband’s ex-wife shows up with her new partner at this specific time and place would be an understatement.

As the less-than-romantic event begins, Jane receives a warning—“BEWARE”; and shortly thereafter another mysterious warning—“Beware of the couple at the table nearest yours.”

Strange activities begin to occur when all of the guests show up the next day to find that the tables at the outdoor dining area have been moved, forming a large circle around one table—the one table where Jane and William are to sit.

The warning Jane received suddenly makes no sense because no one table is closer to hers and William’s than any other.

Throughout the story Hannah does a good job of painting Jane as a nasty person who threatens each character with blackmail if they don’t admit to writing the messages. No one cops to it, raising Jane’s ire another notch.

As an added problem, the expensive champagne meant for Jane and William inadvertently shows up at Lucy and Pete’s table. In a fit of anger, Jane stalks off to her cabin; William follows to try and calm her down; Jane is found murdered, and William is catatonic!

Enter two more characters, and this is where the determination of the protagonist becomes a bit fuzzy. Detective Constable Simon Waterhouse and wife, Sergeant Charlie Zailer, are at Tevendon for their own vacation, and now they must search for the truth.

As the story progresses, character names change and a side story revealing Mr. and Mrs. Friendly comes to light, which has nothing to do with Jane’s murder but does reveal a family relationship that feels as if it has been included just to add more characters.

The reader has to wait until the end of the story when Det. Constable Waterhouse gathers all of the guests back at Tevendon where he reveals Jane’s murderer and how he came to unravel this mystery. It is a less than satisfying ending.

The story moves backward and forward through time—July 2019 at Tevendon to January 2020 at various locations, and back again and forward again. Some chapters are titled with dates, others with dates and character names. Hannah places the reader in Lucy’s mind with first-person point of view, then switches to third-person narrators with other characters. The time movement, chapter titles, and narrator changes tend to further confuse the reader.

Hannah’s major characters are well developed, the plot has some merit, but the writing is not tight and tends to wander, making for a confusing storyline.

The story is slow paced and a disappointing read.