The Couple at Number 9: A Novel 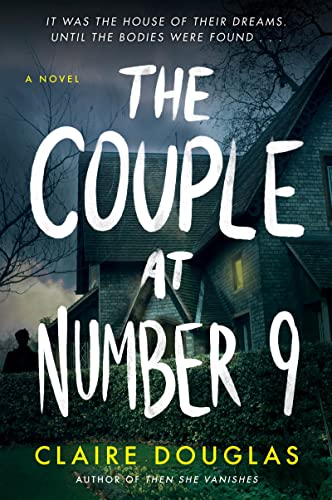 “An emotion-churning series of twists and turns uniting two disparate sets of people in a hunt for the truth.”

When Lorna discovers her Alzheimer’s-stricken mother owns a cottage in Beggar’s Nook, she gives it to her daughter and her daughter’s boyfriend.

Tom and Saffron are eager to move in. They’re in love and expecting their first child, and a rent-free home is a Godsend. First, Saffie wants to remodel the kitchen, but when the builders began digging up the garden to widen the wall, the horror begins.

“‘While we were digging around, we found something,’ says Darren, folding his arms across his dirt-streaked T-shirt.

Karl steps forward confidently, almost gleefully, kicking up dust from the ground as he does so. ‘It looks like a hand . . .’”

Reporters descend on the cottage, harassing and frightening Saffie. The police want to question Grandmother Rose, but all the old woman’s ramblings tell them is that she may know something about the crime but is so confused, they’re not certain what to believe.

“DS Barnes takes a deep breath. ‘. . . Did you ever witness anyone being hurt in the cottage?’

‘Jean hit her over the head.’

DS Barnes glances across at his colleague and then back at her mother. ‘Jean? Who’s Jean, Rose?’

‘Jean hit her over the head, and she didn’t get back up again.’

DS Barnes uncrosses his legs, his face passive, but Lorna can see the twitch of excitement at the corners of his mouth. Jean hit Daphne over the head?’

Confusion flits across her mother’s face. ‘I don’t know.’”

A man claiming to be a detective terrorizes Lorna, accosting her and threatening Saffie if she doesn’t ‘hand over the evidence’ that Rose possesses.”

At this point, a new character appears, adding more mystery.

Theo Carmichael has always been closer to his mother than his father, a well-known fertility doctor. With her death years before, he feels it’s his duty to maintain a relationship with Vincent Carmichael, however. When he finds a news clipping about two skeletons found in a garden in Beggars’ Nook, and the note “Find Her” in his father’s handwriting, he has to know what it means.

“Theo peers into the cupboard, gently pushing on the shelves within. The bottom one creaks under his hand. He inspects it more closely: it’s loose. He pushes it and the top comes off, revealing a sort of hidden section underneath. Theo’s heart pounds. Something’s there: a small pile of newspaper cuttings with a black folder on top. He reaches for the cuttings. They are all dated from 2004 and are from local newspapers about his mum’s accident. He understands why his dad might want to keep them, but why hide them?”

What follows is an emotion-churning series of twists and turns uniting two disparate sets of people in a hunt for the truth, along with some surprising revelations about a juvenile murderer from 60 years before, a doctor taking advantage of his patients, and a shocking example of mother love.

What a tangled web we weave when first we practice to deceive . . . this novel follows that quotation with a vengeance, as it untangles the skeins of events happening 40 years before.

Told from the viewpoint of Lorna, Saffie, Theo, and the mentally fading Rose, it recounts each person’s take on the events, some reaching into their memories and being shocked to learn those memories may indeed be false.

In the end, justice prevails, though not for all, as family love tempers some mercy into the bargain.

The Couple at Number 9 is a story of loneliness and fear, the ways love can suddenly twist into deadly anger, and also how we may never actually know those to whom we are the closest.