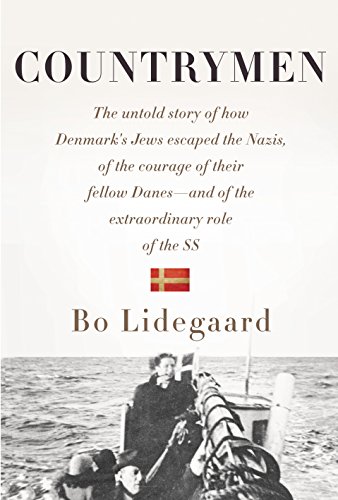 “. . . an amazing story of how Denmark saved its Jews from Nazi Germany.”

Among all of the nations of Europe that were conquered by Nazi Germany in World War II, Denmark stands alone in protecting its Jewish population.

In 1943, when the king, his ministers, and the parliament of Denmark understood that Nazi Germany was coming to ensnare their Jewish population and send them to concentration and death camps, they simply said, “No.”

While the government used its limited powers to confound and confuse its enemy in Berlin, the warning went out to Jews that a catastrophe was at hand. This warning enabled most Danish Jews to find a place to hide or to escape to neutral or Allied nations. At the same time, the Danish government made it clear to Nazi Germany that no one would aid them in capturing innocent Jews.

Over 14 days, Danish citizens found ways to hide and protect Jews destined to be exterminated. Out of a population of about 7,000 Danish Jews, a shocking 6,500 managed to escape, primarily to Sweden via a clandestine flotilla of fishing boats and naval crafts of all kinds.

This exodus has been known for decades. But this is the first time that all facets of the miraculous escape have been systematically collected and made public. Based on the family diaries of several Danish Jewish families, these amazing accounts of heroism have finally been made available.

This volume proffers the heart-stopping escapes of many Jewish families fleeing local police, the Wehrmacht, and the Gestapo. These stories of moral fortitude and astonishing courage bring to light the magnitude of tolerance in Denmark and their willingness to risk their own lives in fighting Nazi Germany.

From September 26 until October 9, 1943, Nazi Germany initiated a capture of all Danish Jews. After a slow start, during which there was some confusion about who was a “full Jew, half-Jew, one-quarter Jew” and so on, the Gestapo soon engaged in a widespread collection of every Jew and potential Jew in Denmark. Germany enlisted the assistance of Danish police, which soon turned into a farce as Danes refused.

Sweden, next door to Denmark, remained neutral in World War II. As overland escape routes from Denmark into Sweden were virtually nonexistent, the bulk of Jewish refugees had to escape via the ocean. Thousands of boats—from large cargo ships to fishing trawlers to rowboats, anything that floated—served as vehicles for escape. The captains, owners, and crew of these ships risked their own lives to aid Danish Jews.

Helpless in the face of capture and probable death, Jewish Danes gradually accepted their fate and made plans to leave, their only means of escape boats and ships controlled by gentile Danes. Leaving their homes, property, businesses, schools, and friends behind, Jews sought escape in every city, town, and village with a harbor or boats. They hid in freezing forests, barns, attics, and tunnels along the way.

Some, like the family of Anne Frank, decided to remain in hiding in cities. Most of them were found, incarcerated in concentration camps, and eventually died from starvation and disease, were gassed in death camps, or were shot by the Gestapo on the spot.

The Danish resistance was unprepared to organize a massive relief operation quickly enough to save their Jewish neighbors. There was no organization, ready to help move Jews to safety in Sweden. Instead, Jews were saved as a result of spontaneous ingenuity and bravery.

Danes stood by their Jewish friends and co-patriots—even at the risk of their own lives. Those who aided Jews came from all walks of life and all professions. Hospitals became collection centers for Jews. Underground newspapers gave people hope and provided clandestine escape instructions. Students contributed all levels of assistance as did doctors.

Escape routes were swiftly created, manned, and executed. Danish Jews were bound together like slaves of a different time, processed onto ships and boats and sent off to freedom. Almost all of them slipped away from Nazi hands.

The heart of this story lies in the diaries of Jewish refugees who recorded every aspect of their escape. In heart-throbbing anecdotes, we flee from the Gestapo with them, step by step. We shudder with them in dark, rain-soaked forests and in the freezing ocean when they had to abandon boats; and we tremble with them when they are just a few feet away from capture.

Thousands of Jewish families slipped into the night with aged grandparents and crying infants. This included the infirm. Most would not have escaped without help.

The author includes many detailed historical narratives. These provide the backbone for our understanding of the Nazi “Final Solution to the Jewish Question.” There are also many detailed chapters that provide for the political underpinning of wartime Denmark.

And while such detail is at times necessary, it also slows the story to a crawl in some instances. Clearly, the exciting and rewarding moments occur when we read the diaries of Jews who escaped. Equally exciting are passages that reveal the fear and risk that Danes accepted. Less narrative (where possible) and more anecdotal passages might also have reduced the book from 430 pages down to a more manageable 300.

Bo Lidegaard is a talented and evocative writer. This book has consistent flow and maintains interest, even with the extensive narrative. His use of dialogue and dialect is appropriate and accurate.

Mr. Lidegaard is equally adroit explaining the angst of Danes who risked their lives to help Jews. We sense their anxiety, but also their pride and courage. Moreover, it is clear throughout that citizens risked their lives not only to save Jews, but also to protect the Danish concepts of equality, tolerance, and social justice—truly an amazing story of how Denmark saved its Jews from Nazi Germany.