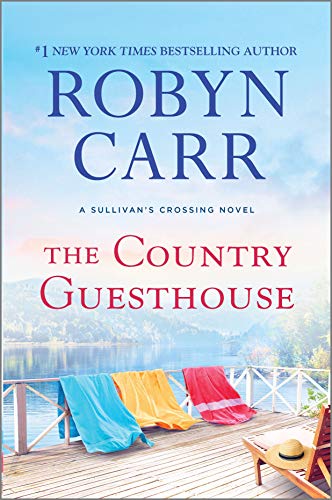 “The Country Guesthouse is an enjoyable, quick read. It’s just right for the reader who, like Hannah and Owen, is looking for a fun escape from reality.”

The unexpected death of a friend has life-altering consequences for Hannah Russell, a salesperson for a medical supply company. With no warning, she becomes the legal guardian of Erin’s son, Noah, a smart and inquisitive five-year-old boy with cerebral palsy.

Hannah takes a month-long vacation in the Rockies to get to know young Noah and help him adjust to losing his mother and gaining a guardian. It’s the perfect place for a quiet vacation. “The upscale . . . house was in the woods on a lake and had a huge deck from which there was an amazing view of the Rockies.” The serene, secluded setting is just what Hannah and Noah need to get to know each other better. Until the realize they won’t be alone.

Famed photographer, Owen Abrams, rents out his massive home as he travels the world in search of perfect, prize-winning photos. However, a conflict causes Owen’s trip to be canceled just before Hannah and Noah are to arrive at the house. With Hannah’s permission, Owen takes up residence in the converted barn on the property. From the start, Owen and his dog, Romeo, begin bonding with Noah. As she watches Owen and Noah grow closer, Hannah begins to see this stranger for the man he is and the father he could be.

Putting aside the unlikelihood that any mother or guardian would instantly entrust her five-year-old to long hours alone with a complete stranger, the book has a number of good qualities. Like Carr’s many other books, the characters in this light-hearted story are the kind of people one would like to have as friends.

As with all the residents of Sullivan’s Crossing (the setting of several other books by Carr), Hannah and Owen are escaping haunted pasts and family secrets while searching for what’s missing in their lives—home sweet home and true love. Hannah has survived a string of broken hearts and failed engagements, and Owen still grieves for his abducted, murdered son. Hannah comes to understand the depth of Owen’s pain and his resilience when she meets his ex-wife, Sheila, still his best friend.

The reader empathizes with both characters and can’t help but fall in love with sweet Noah. Just five, Noah has already lived a life full of bitter blows. With no father—his mother never revealed his identity to anyone before she passed away—Noah had only his mother to depend on. Losing her to a sudden, completely unforeseen complication of the flu, Noah is left alone except for his mother’s three closest friends. With an uncle who is a convicted felon and a grandmother who is a pathological liar and money-hungry opportunist, Noah has problems beyond his disability.

When Hannah decides it would be best for Noah if she extends her family leave through the summer, both Noah and Owen are thrilled. “Every day they swam, hiked, took pictures . . . Hannah and Noah read together every afternoon . . . They all went to the market together and got ice cream. They had breakfast, lunch, and dinner together. Then [Owen] would sit on the porch with Hannah after Noah went to bed. He wasn’t sure what part of each day and night he loved the most.” The summer is almost idyllic for all of them until it isn’t.

The sudden appearance of Noah’s estranged grandmother and ne’er-do-well uncle add an element of tension that’s a bit unrealistic. The ensuing custody battle and supervised visits confirm to Hannah all that her friend warned her about concerning Noah’s dysfunctional,  biological family. Greed and jealousy are indeed the root of all evil, made obvious in every scene with Victoria and Roger.

The Country Guesthouse is an enjoyable, quick read. It’s just right for the reader who, like Hannah and Owen, is looking for a fun escape from reality.