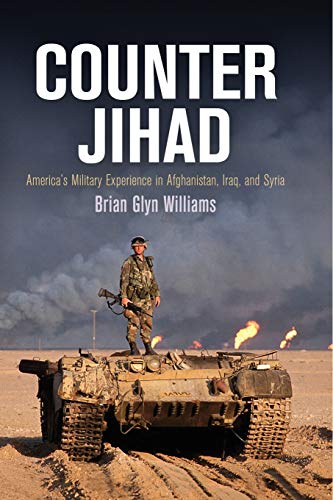 “accomplishes a challenging goal of tying all of these conflicts together into a coherent narrative . . .”

Historians are just beginning to grapple with grand narratives of America’s long conflicts in the Middle East after September 11, 2001. Recent books have typically offered separate perspectives on the long war in Iraq; America’s continuing involvement in Afghanistan and neighboring Pakistan; and the seemingly intractable struggle in Syria.

Brian Glyn Williams takes a different perspective in this book as he offers an integrated perspective on America’s recent involvement in the Middle East, beginning his history not on 9/11, but going back to examine how the Israeli-Palestinian conflict, the Soviet invasion of Afghanistan, and Operation Desert Storm built the road that led to the attacks on New York and Washington and the beginning of over a decade of active military involvement in the region.

As he points out, the attacks of 9/11 were the results of years of grievances by Islamic fundamentalist groups, many of them sponsored by the U.S. during the Cold War struggle in Afghanistan, that were exacerbated by the continued American military presence in Saudi Arabia after 1990.

The most organized and lethal of these groups, Al Qaeda, was a direct offspring of all these events, and they were quite clear in their desire to attack American interests, conducting a truck bomb attack on the World Trade Center in 1993, bomb attacks on U.S. Embassies in 1998, and a suicide bombing attack on the USS Cole in 2000.

The author’s spot-on analysis throughout the book that America’s unfortunate ignorance and disregard for the cultural, religious, ethnic, and tribal influences in the region made all these conflicts likely inevitable and unfortunate and certainly inhibited successive Administration’s ability to achieve their security and foreign policy goals.

The book expounds on two major passions of the author, the failure of the Bush Administration to act on intelligence to detect the 9/11 hijackers and the selective use of intelligence data on Iraq’s weapons of mass destruction (WMD) programs that lead to the invasion of Iraq in 2003.

The notion that the Bush Administration should have taken Al Qaeda more seriously is certainly true in hindsight, given their previous attacks in 1993, 1998, and 2000, and there was certainly a great deal of chatter and indications that Al Qaeda was planning some sort of attack on the U.S. throughout 2001.

However, it is less likely that anyone in the U.S. government or law enforcement could have conceived of using airliners as weapons, and clearly the bureaucratic walls between intelligence and law enforcement agencies hindered the ability to connect the dots and prevent this tragedy.

The use of intelligence to make the case for invading Iraq in 2003 has certainly been analyzed, reviewed, and debated by pundits, scholars, and politicians, but the author does a thorough job of reviewing all aspects of the Bush Administration’s often disingenuous efforts to portray Iraq as an existential threat, and dissecting the various studies and post-mortems on why no WMDs were found after Iraq was occupied.

The heart of the book looks at the ebb and flow of America’s efforts to fight two simultaneous campaigns in Iraq and Afghanistan, which inevitably led to resource limitations in one conflict—Afghanistan—as American attention is focused on the unexpectedly vicious and nearly overwhelming insurgency and sectarian violence in Iraq from 2003–2009.

Once the Iraq campaign is stabilized following the Anbar Awakening and Surge of 2006–2008, the attention again returns to Afghanistan, where the Taliban have sheltered and regrouped in neighboring Pakistan and begin to take advantage of America’s focus on Iraq to begin rebuilding and re-controlling large portions of the countryside.

The American surge in Afghanistan in 2010–2011 is only partially successful as war weariness, corruption and tribalism continue in the Afghan government, and the persistence of the Taliban resistance leave the outcome still unclear in 2018.

Finally, the unintended consequences of the Arab Spring of 2011–2012 bring back all the fissures in Iraq that were never completely resolved by the Obama Administration before withdrawing all U.S. troops in 2011 and the resulting brutal Syrian civil war and rise of ISIS once again brings the U.S. back to military involvement in the region.

The book ends with a somber note that ISIS has not been eliminated, Syria is still a failed quagmire of a state, and the future is still uncertain in Iraq and Afghanistan.  Not perhaps a decisive or desired end to nearly 15 years of American military involvement in the region, but certainly the situation as it exists.

As a single volume on these turbulent years, the book accomplishes a challenging goal of tying all of these conflicts together into a coherent and very readable narrative that offers some sobering lessons.