Countdown to D-Day: The German Perspective 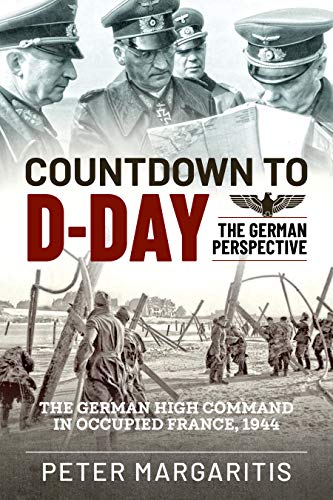 “Detailed and comprehensive, Countdown to D-Day should be a standard work on what the Germans did and did not accomplish to meet ‘The Longest Day.’”

Why weren’t the Germans better prepared to defend against the Allied landings in Normandy? As the 75th Anniversary of D-Day is observed, this question still intrigues historians and students of World War II. In previous Allied amphibious assaults on Sicily, Salerno, and Anzio the Germans had responded with sharp counterattacks by panzers and infantry and nearly drove the Allies into the sea in Sicily and Salerno, and bottled up the Allied beachhead at Anzio for nearly five months.

So what prevented a stronger German response to the Allied landings on June 6?  The potential for successful counterattacks was palpable, especially against the very shallow Omaha Beachhead or the other landing areas before the Allies could create a contiguous lodgment.

Author Peter Margaritis presents the German perspective of the six months leading up to the “Longest Day” to answer some of these questions. Using a variety of sources, he presents a daily diary of those critical months starting in November 1943 when Field Marshall Erwin Rommel, the legendary “Desert Fox” was at first ordered to inspect the German defenses of Hitler’s so-called Atlantic Wall, and then take command of the German forces in northern France to repel the anticipated Allied landing.

As the daily actions and events from senior German commanders unfold, the author explores several critical issues that contributed to the failure of the German Army to stop the Allied landings. First, the Germans never completely decided between their two counter-invasion strategies: stop the invasion on the beaches or counterattack the Allies once they came ashore. As the narrative clearly shows, this debate was never fully resolved, with Rommel advocating a water’s edge defense while nearly all of the other generals believed in the merit of counterattacks by a strategic panzer reserve.

This was the key decision to be made since it affected both the placement and command of these vital units, and the diary shows a tremendous amount of time and energy was spent in debate among the senior commanders on where to place the panzers, some of it very acrimonious. Because the Germans could never truly decide, they ended up with a half-baked measure to move some panzers closer to the coast while keeping the bulk of them in reserve.

Related to the strategic indecision was the second issue, the state of the German beach defenses. Rommel’s November 1943 inspection found inadequate and indifferent defensive preparations, with large stretches of the Normandy coastline where the Allies were planning on landing nearly undefended at the end of 1943. For the most part the Germans had viewed France and the western theater as fairly soft garrison duty and a location to rest and refit units savaged by combat against the Russians.

Except for the fiasco of Dieppe and some commando missions, the West Wall had not faced a serious threat. Only after Rommel’s inspection and blistering report did the Germans begin real preparations for the Allied assault that both sides knew was coming in the spring of 1944.

The author’s diary format highlights the whirlwind of activity by Rommel to place landing obstacles, paratrooper obstacles, and create more bunkers and fortifications along the entire northern coast of France, particularly those unguarded areas along the Calvados coast destined to become Omaha Beach.

This activity highlighted the third issue: the lack of men and materiel to conduct a successful defense, even with Rommel’s hurried preparations. There simply weren’t enough divisions to man the beach defenses and provide a significant counter-attacking force. Once the Allies broke through the beach defenses, they would be securely ashore.

The daily diary format does get a little repetitious at times, but it also highlights the bickering and political intrigue of the German commanders, the continuing confusion and indecision of where to place the critical panzer divisions, and the sheer scale of what Rommel and the Germans were able to accomplish in the six months before June 6.

And of course, the daily record shows that even the legendary Desert Fox could not escape the need to sift through reports, requisitions, and the other minutiae of military command. The author also provides some key Allied activities on certain days, just to put everything in context.

Once the invasion begins, all of the German decisions, good and bad, come home to roost as the Allies hurl their invasion force ashore. The challenges of troop numbers, command authority, reserve placement, logistics, and even the absence of key commanders like Rommel himself led to hesitation and confusion long enough for the Allies to overcome the beach defenses and establish firm beachheads.

Overall, the author has gone a long way to providing a comprehensive look “on the other side of the hill” at the German side of D-Day, especially those critical first six months of 1944. Detailed and comprehensive, Countdown to D-Day should be a standard work on what the Germans did and did not accomplish to meet “The Longest Day.”