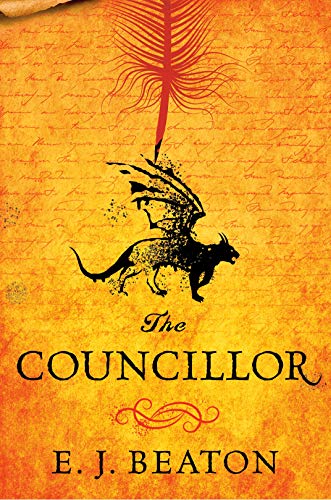 “For the first time, a ladder was hers to climb, its rungs not woven of fibers but fashioned of smooth and unbending metal. Who knew where she might scale it to?”

Ideal for fans of Samantha Shannon’s The Priory of the Orange Tree and R. F. Kuang’s The Poppy War, The Councillor is an ambitious Machiavellian debut following the rise of palace scholar Lysande Prior to power following the death of her closest friend, the queen. As enemy forces gather both beyond and within the country’s borders, Lysande will have to navigate shifting political alliances and the squabbling of the nobility, all the while never knowing who to trust—or who killed Queen Sarelin.

What happens when power comes to those long denied it? Beaton explores this question as Lysande, an orphaned commoner, ascends the highest ranks of the nobility to become Councilor: the person tasked with choosing the next ruler after the queen’s murder. Lysande never asked for this responsibility. But once granted, she finds it harder and harder to contemplate giving it up. Beaton’s prose is deft and vivid as she writes explicitly about how power feels to Lysande.

“She remembered how her words had sounded like sunlight on steel as she issued the order.”

Beaton grounds emotions in the body with her prose, a theme that parallels the emotional and physical changes taking place within Lysande as she grapples with her new position, addiction, loss, and the strange changes within her own body.

Lysande is a deeply observant character. Her interrogation of the motives of others is just as keen as her interrogation of her own motives, and this self-awareness lets Beaton tease out the hollows where ambition, self-delusion, and idealism live within the human psyche.

Lysande struggles against the mantra drilled into her during her childhood at the orphanage: “Restrain, constrain, subdue,” and the country’s motto: “Everything in its place.” The higher her star rises, the clearer she sees the power structures that underlie the fabric of her world, and the more conflicted she becomes. Her love for Queen Sarelin is at odds with Sarelin’s brutality, and the legacy that brutality has left on the repressed population of magical Elementals—including Lysande’s close friend and sometimes-lover Charice. The more she learns, the more everything seems connected, but putting the pieces together carries risk.

Beaton’s characters are complex, flawed, and deeply human. Each is written with empathy and an understanding of the many facets of desire, and Beaton subtly flips gender roles; in this world, women are warriors and rulers, and sexuality is stripped of the confines of homophobia, breathing new life into the fantasy setting.

Beaton also doesn’t shy away from the toll power takes on those who wield it. Lysande struggles with addiction to chimera scale, a magical drug with dangerous side effects. As her responsibilities grow, so does her dependence on scale to function, a situation which becomes increasingly untenable as the plot unfolds.

“Even in the old days, I could never have kept you from yourself. I would warn you about a cumulative effect—about what happens when one spoonful becomes two, or three, or five—but I don’t think a lack of understanding has ever been your problem.” Charice’s stare passed over the jars. “Have you thought about how you will explain . . . this, when someone catches you?”

While some plot points are predictable, others are sure to catch readers by surprise, and the political intrigue drives the novel at a steady pace in tandem with Lysandre’s development from scholar to ruler.

The Councillor is a book that will make readers examine their own relationships to privilege to consider and what they might do in Lysande’s place. Readers who enjoy political intrigue in their fantasy will find Beaton’s debut deeply satisfying.