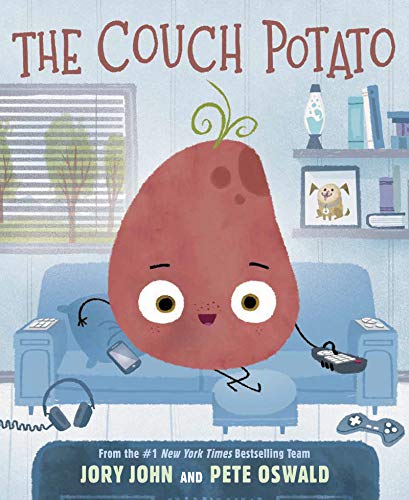 In Jory John and Pete Oswald’s book, The Couch Potato, we are introduced to a very charming potato who is living his dream life—all from the comfort of his couch. Why leave the cushy life on the sofa when literally everything you could possibly need can be accessed at the press of a button? Want a snack? No problem! Need to visit your friends? Easy! With more than a dozen computer screens, you can see what everyone is doing and watch your favorite television shows all at the same time. As he says, “Why would I ever leave this comfy cozy couch? It’s got everything a potato could need.” Until . . .

ZAP! The power goes out, the screens go dark, and all of Potato’s fancy technology stops working. Now what?

Potato decides to get off his couch and take his dog Tater for a stroll outside. He seems surprised at what he sees and hears as he and his dog explore the big wide world. “Everything is so vivid, like a high-resolution 156-inch curved screen but even more realistic.” All his senses are at work, reacquainting him to the things he hadn’t seen, smelled, heard, or touched in a long time.

At the end of an exciting but tiring day, he is still happy have his comfy couch to fall back on, but it won’t be a permanent seat anymore. He decides he can have it all—experiencing the world outside with his friends and his technology and familiar comforts. This healthy balance will make him the best kind of potato—well rounded.

The Couch Potato is witty and charming yet carries an important lesson about the overuse of technology and what people are missing if they get too much screen time. A lovely book with a timely lesson. Five stars!

Lisa Gammon Olson's most recent book from her American Herstory Series is Sewing the Magic In (Eifrig Publishing, 2018). A previous title, Dust Flowers (Eifrig Publishing, 2017) is a finalist for a 2017 Foreword Indie Award for Best Children's Picture Book. Her third book in the series, The Cheese Song, will be out this summer. She works in an elementary school where she is always surrounded by children and books.