The Cottingley Secret: A Novel 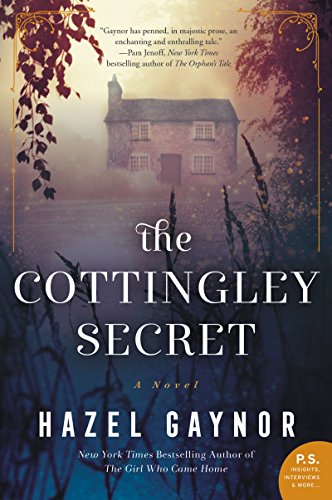 In 1917 while in the throes of the First World War, nine-year-old Frances Griffiths left her home in Cape Town, Africa, with her mother to stay with her aunt in Cottingley, England. Frances, sad and missing her father as he fights in the battle, soon adjusts and becomes great friends with her cousin Elsie Wright, who is seven years her senior.

Frances is drawn to the beck, an enchanting forest and stream behind her aunt's home, and much to her mother's consternation spends most of her free time there. One day, Frances spots mystical colors in the woods, believing wholeheartedly they are the fairies alleged to reside in the countryside.

Letting only Elsie in on her findings, the two decide to photograph the sprites to prove they do exist, though it seems they are only visible to Frances. Elsie, a talented young artist, draws illustrations of fairies and she and Frances set the stage for photos appearing so real, author Sir Arthur Conan Doyle, states they are in fact authentic, and writes about them using the pictures, causing quite a sensation across Europe and later the world.

Now, it's 2017, and Olivia Kavanagh returns to her childhood home in Ireland. Her grandfather recently died, and she learns she inherited his book shop, Something Old, which sells rare and antique books. Olivia reminisces over the happy times spent there, and though she should be in London planning her nuptials; finally settling down at age thirty five, Olivia feels torn. Does she really want to get married? Can she leave her nana who is in a nearby nursing home suffering from Alzheimer's?

Frustrated with her options and thrilled to own Something Old, can she cancel her wedding, with which the preparations are already in full swing? Doesn't she owe it her fiancé to follow through even though it doesn't feel right to her?

A note Pappy left Olivia encourages her to believe in herself and live the life she desires. Along with his missive, he leaves a memoir written by Frances Griffin 100 years earlier. Olivia is enchanted by the musings from that era with tales of sprites and fairies, and she yearns to learn more about this captivating child as well as information about her own heritage.

Olivia's melodious prose contains similes and metaphors adding a flowery description to her tale. The following is such an example when Olivia mentions the loss of her beloved grandfather:

"The awful reality of his absence hit her, ripping through the shop like a brick through glass, sending broken memories of happier times skittering across the creaky floorboards to hide in dark grief-stricken corners. He wasn't there, and yet he was everywhere: in every cracked spine, on every dusty shelf, in the warped glass at the windows and the mustard-yellow walls. Something Old wasn't just a bookshop. It was him—Pappy—in bricks and mortar, leather and paper. He'd loved this place so much, and Olivia knew she must now love it for him."

Olivia's conversations with her grandmother do not offer much, for the older woman's recollections are sporadic at best. Many years ago Olivia's mother gave her a silver-framed photo of a little girl among fairies, and she wonders her nana knows if it's still around. Fascinated by history and the Irish fantasies Olivia procrastinates canceling her upcoming marriage.

Author Gaynor weaves an account of fiction with the century's old historical information from Frances's memoirs. One cannot help but be enthralled by the drama and excitement as two young girls discover their mystical beck foretelling mysteries exposed only to children.

Frances's writings from the past intertwine flawlessly into the novel, and facts from a century ago are divulged in the eyes of a child as shown here:

Cottingley, Yorkshire. June 1917: "The weeks passed quickly blown away by the stiff spring breezes that whistled down the chimney breast and blew the blossoms from the trees and tugged at my hat as I walked up the hill from Cottingley Bar tram. The only thing the wind couldn't blow away was the dark shadow of war that hung over us all like a thundercloud. But I was happy at Bingley Grammar, and as the days lengthened and the last of the snow thawed on the distant hilltops, so too did my indifference to Yorkshire. Best of all, the warmer weather meant more time to play at the beck at the bottom of the garden, where Elsie often joined me."

While Olivia contemplates her future, she listens to her heart to discover the woman she is destined to be. At a time when folks needed something to believe in during a horrendous war, Olivia knows she must believe in herself. The meshing of both stories produces a delightful read.