The Cost of Chaos: The Trump Administration and the World 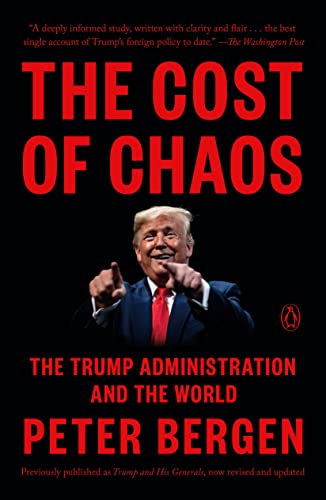 This book updates Bergen’s Trump and his Generals (Penguin, 2019) with a prologue that takes the story through Trump’s activities in the first year of his Big Lie about the election that, the former president charged, fraudulently gave the presidency to Joe Biden. For anyone who did not read the 2019 book, the new edition gives an authoritative review of that Trump did wrong as president—especially in foreign policy and defense issues.

We see how an ignorant narcissist listened to crackpots like Steve Bannon and ignored the few “adults” in high places whose advice could have minimized the damage as Trump followed his instincts. The adults included Secretary of State Rex Tillerson, experienced in negotiating with Russia and other foreign governments on oil deals, but distrusted by Trump as a “globalist” inclined to question an America-first orientation.

Trump also distrusted James Mattis at Defense and H. R. McMaster his National Security Assistant. Each was an accomplished general but also fond of books and knowledge, qualities disdained by the draft-dodger who faked his way into and through Wharton. In time they and sycophant John Bolton openly turned against the president.

The book’s 17 chapters cover topics such as “House of Saud, House of Trump,” “The Murder of Jamal Khashoggi,” ‘From ‘Fire and Fury’ to ‘Love” [with Kim Jong Un], “Pissing Off Allies, Embracing Putin.”

Bergen’s insights on these matters are buttressed by over 100 interviews with well-placed insiders as well as broad reading of Trump statements on Twitter, government documents, news media reports, memoirs by Bolton and others, plus on-site reporting by Bergen in Afghanistan, Iraq, Qatar, and Saudi Arabia, places he visited at least twice while researching the book.

The cost of the chaos triggered by Trump’s presidency is expertly summarized in the book’s prologue:

Laying the foundation for the Taliban takeover of Afghanistan by negotiating a peace with them.

Making a fool of himself in three meetings with Kim Jong Un.

Weakening NATO by insulting Europeans and kowtowing to Putin.

Embracing dictators such as Mohammed bin Salman while treating Ukraine and its president as nothing but a tool in his reelection campaign.

Completely bungling the response to Covid by belittling its danger and then calling it the kung flu.

Bolstering the peril of nuclear spread by pulling out of the 2015 Iran nuclear deal.

Weakening efforts to curb global warming by withdrawing from the Paris Accords.

Normalizing everyday use of fake news and falsehood.

Launching trade wars with China while condoning its repression of Uyghurs and Hong Kong.

In brief, Bergen explicates how Trump triggered chaos and the deep and long-lived costs this entailed.