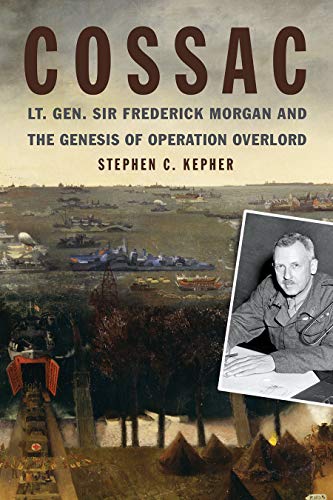 “Kepher has written a must-have volume for any student of D-Day to show just how challenging and risky the Normandy landings were . . .”

The complexities and challenges of planning the D-Day invasion are still mind-boggling 75 years later. Considering that entire effort took place without the modern benefits of computers and communications makes the ultimate success of the Normandy landings even more amazing. But the invasion of France was considered an extremely risky operation and was highly controversial among the senior Allied leadership.

In this fascinating new volume by the Naval Institute Press, author Stephen Kepher takes us through nine crucial months in 1943 when a small but dedicated Allied staff led by a modest and almost forgotten British general laid the groundwork for Operation Overlord by overcoming political uncertainty and working through numerous challenges to create the operational framework for the Allied return to the continent of Europe.

The narrative begins almost immediately after the British Army was ejected from France in 1940. Although the British were alone and solely on the defensive for most of the next two years, the entry of America into the war began the long road to integrating the two Western powers into a cohesive alliance with a dedicated strategic plan to liberate Europe and defeat Nazi Germany.

Summarizing the results of the six major Allied summits leading up to January 1944, the author goes into great detail to describe the delicate politics and heavy egos General Morgan had to navigate, offering interesting anecdotes on how his background and experience made him the indispensable man, able to use persuasion and charm to organize a truly Allied organization and keep the planning effort moving forward as the Allies come to a final decision to buildup sufficient forces to make a landing possible. His patience and fortitude were often sorely tested as he tried to reconcile the very different strategic viewpoints of the Allies, particularly Churchill’s machinations into late 1943 to focus the Allied efforts on the Eastern Mediterranean and Balkans instead of a cross-Channel assault.

Starting with little information and constantly changing guidance from their superiors, Morgan’s staff quickly determines the desirability of landing in Normandy and begins working through myriad planning and logistical details to organize the naval, air, and ground forces needed to offer a reasonable chance of success.

Once the final decision is made for an invasion and General Eisenhower is chosen as the Supreme Allied commander, Morgan’s staff forms the nucleus of the new Supreme Allied headquarters that will now command the invasion his team has been urgently planning for nearly nine months.

As the author notes, it is a testament of the quality of the work the staff was able to accomplish that very few changes were made to the original plan except to expand the size of the landing to take advantage of additional ground forces and the shipping to transport them to the beaches. Morgan agrees to stay on at Eisenhower’s new command and becomes the Deputy Chief of Staff, serving in that role until the end of the war.

The book has a number of excellent appendices, including the original Outline Overlord Plan presented at the Allied meeting in Quebec in August 1943, which provides a fascinating glimpse in the decision-making process that led to the choosing of Normandy as the proposed landing site and lays out with remarkable prescience the eventual Allied plan to secure a beachhead, capture the required port facilities to sustain and build-up the invasion force and eventually liberate France.

This book really fills in the story of how the Allies went from the first tentative ideas on how to win the war in Europe to actually planning and conducting the D-Day landings. Using numerous memoirs and official records, Kepher has written a must-have volume for any student of D-Day to show just how challenging and risky the Normandy landings were and highlight the remarkable story of the small team of planners who overcame significant odds to help plan the liberation of a continent from tyranny.