Cosmos: The Infographic Book of Space 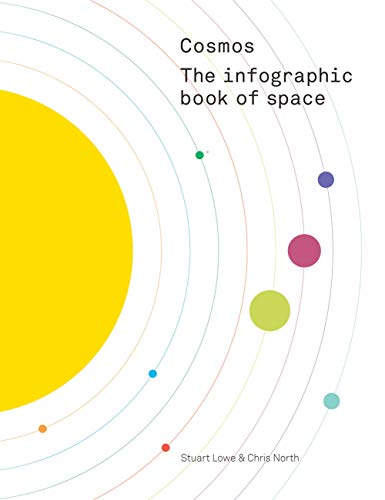 Both Stuart Lowe and Chris North are astronomers, and together they have created a brilliant collection of infographics in order to make complex ideas graspable through visual representations.

Each infographic is accompanied with a brief paragraph (or paragraphs) of information detailing the subject matter illustrated. From spaceflight to solar flares, Cosmos is chockful of detail and information. The text is straightforward and fairly easy to understand though it is written for an older audience, perhaps high school level and above, or maybe junior high students who are eager and curious about science.

There are nine chapters on space exploration, the solar system, telescopes, the sun, stars, galaxies, cosmology, other worlds, and miscellaneous. In the ninth chapter, miscellaneous, readers learn about relativistic effects, such as black holes, the Astronomy Picture of the Day website, and the popularity by types of images as illustrated in an infographic (by far, planets are the most popular), and a chart on identifying flying objects, the most off the cuff and amusing topic by far: “The truth is out there. It might just be an uplit seagull.”

While writing that more men than women have been in space is understandable, and the number isn’t too complex to comprehend (1,094 men and 129 women), seeing it illustrated on the page with little figures certainly makes it overwhelmingly disparate. Interestingly, however, though Lowe and North both claim in their introduction that their data is accurate as of 2014, no brief Internet searches conclude a number of 1,223 having participated in spaceflight. It would be nice if the authors provided citations to their data, as good infographics should, on the pages where they present their information.

A good infographic example in Cosmos is the section What Is the Universe Made Of in which hexagons of varying hues are used to illustrate the various matter. The image is like a honeycomb and simplifies for visual learners the percentages that otherwise stymies people who cannot conceptualize 68.3%, so a page full of light pink hexagons makes the case. However, it is still lacking a citation, as are all the infographics.

Some of the infographics presented fail in their attempt to visually represent the data and appear to have been haphazardly created, perhaps as filler content. For example, in the Astronomy Picture of the Day infographic, it is difficult to tell by the box widths and sizes that make up the Planets section whether or not Mars is a more popular image than Jupiter because Jupiter is wider than it is tall whereas Mars is tall and thin; it is quite possible the popularity is nearly equal. Numbers in the boxes would be useful here, particularly if the images are vague.

There are quite a few basic rules and guidelines ignored by the people who created the infographics in Cosmos. The graphics, colors, and fonts used are simple, but some of the similarities in hue may be difficult for those who have visual impairments or color blindness. For instance, the Butterfly Diagram on p. 108 uses yellow, reds, and oranges, on a somewhat yellow background, which can make it difficult for even average eyesight.

While pretty to look at, some of the text may be too small in a book format to actually read, such as the infographic on The Timeline of Solar Systems in which the numbers and text get lost among the twisting colorful lines. And, again, there are no citations—when it comes to data, a good researcher is not just going to take the word of a secondary or tertiary source that the information provided is up to date, rather the reader is going to want to find out for him- or herself where the information was gathered from, what context it was taken in, etc. While at the back of the book there is a section of sources, notes, and acknowledgements with page numbers, the information is difficult to decipher and not at all up to scholarly standards.