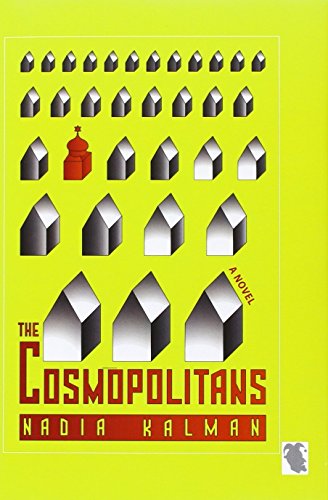 The Cosmopolitans, Nadia Kalman’s smart, funny, wise, and entertaining debut novel explores the relationships and dynamics of a contemporary Russian-Jewish immigrant family from the former Soviet Union, their acculturation in Stamford, CT, as well as the love lives and courtships of the three daughters.

One of the book’s cover blurbs compares the latter aspect to the novels of Jane Austen, but 21st century women have choices that were unimaginable 200 years ago. The author provides another analogy when she has the entire family attend a production of the musical, Fiddler on the Roof. Osip Molochnik, an industrial design engineer, has three daughters not five, but like Tevye he is powerless to choose appropriate suitors for them; it also turns out that he has been unable to compel his research scientist wife Stalina’s sexual fidelity.

The book’s title may be a reference to “rootless cosmopolitans,” Joseph Stalin’s epithet for Jewish intellectuals. As Jews, the Molochniks were oppressed outsiders in the Soviet Union, and as immigrants they are culturally not entirely at home in this country. Unlike the Russian-Jewish immigrants of a century ago, however, Osip and Stalina are highly educated and have a cultural chip on their shoulders. Their sense of superiority is belied by their ungrammatical speech, which, like that of the cartoon characters Boris and Natasha from “The Rocky and Bullwinkle Show,” omits articles and auxiliary verbs.

They are delighted when their oldest daughter Milla, an accountant and state college alumna, becomes engaged to Malcolm Strauss, a Yale graduate and songwriter with undecided career goals (who is a descendant of Levi Strauss, the 19th century blue jeans entrepreneur, and Isidore Strauss, the Macy’s department store magnate who died heroically on The Titanic), because his parents, wealthy Manhattanites Jean and Bobby, are also pretentious cultural snobs.

Milla, however, becomes infatuated with Julie, a clerical worker at her accounting firm and begins to question her sexuality:

“Malcolm and Milla honeymooned in California, driving from town to town filled with girls who looked like cruder versions of Julie. Milla woke Malcolm up for sex every morning. Sex was an acquired taste. Julie had made her acquire lesbianism, and Malcolm would help her un-acquire it. Back in New York where women wore more clothing, it would be even easier.”

Middle daughter Yana, an idealistic teacher whose left-wing politics are the polar opposite of her parents’, falls in love with Pratik Rehman, a Bangladeshi exchange student Osip brought home to tutor Katya, the American born youngest daughter, in math:

“Pratik was like a first-time chess player: all his moves were a surprise to his more experienced opponent, that is, Yana. Sometimes that worked to his favor, sometimes not. He kissed her elbow, stuck his finger in her bellybutton. ‘Wow,’ he said, as she held his hands above his head. Anything she did he took as a sign of her odalisque-like prowess.”

Katya, a drug abuser who drops out of school, appears to have a form of Tourette’s Syndrome in which she uncontrollably starts reciting excerpts of Leonid Brezhnev speeches in the party boss’ deep baritone voice. She finds love with a fellow black sheep, Roman Pitursky, a recent arrival, part-time construction worker, occasional shoplifter, and the ne’er-do-well nephew of family friends, whose drug addicted mother remains in Russia with her abusive boyfriend.

The book’s eight sections each begin with a flow-chart style family tree to which new characters are added as they join the family; in the final section the diagram is followed by the words “The End.” It takes will power to resist skipping ahead and glancing at the diagrams to see who will be paired to whom and which pairings last.

The first seven sections are divided into one to four page chapters (perfect for subway reading), each of which bears the name of its central character, starting with Osip’s bachelor brother Lev, who is the book’s narrator; however, because the characters are not developed in depth the novel is more of an ensemble work than a series of character studies.

Author Kalman packs a lot of narration and dialogue into her short, suspenseful chapters, but some readers may have difficulty adjusting to the discontinuity of jumping from character to character and having to recall at the start of each chapter what that chapter’s character was up to several chapters earlier (however, the brevity of the chapters should mitigate that problem).

Most readers, however, will find no such difficulties, will enjoy the book immensely, and will look forward to its author’s future work. At a Strauss Passover seder, Milla corrects another guest who misquotes the opening line of Tolstoy’s Anna Karenina. The Molochniks are no cookie cutter “happy family,” but putting their unhappiness in perspective it turns out to be what Freud called “ordinary unhappiness,” which is not so bad after all.