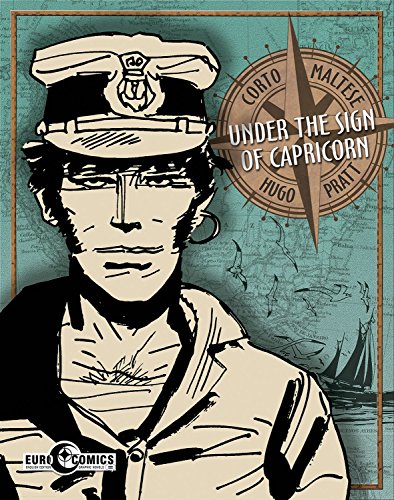 “the best of European storytelling . . .”

Moments before 2014 ends a book slips in the door that could be easily considered the reissue of the year. Corto Maltese: Under the Sign of Capricorn by Hugo Pratt brings one of the most exciting and original adventure narratives in the world of graphic novels to American shores.

This is classic adventure literature of the highest order. From uncharted islands to the back waterways of Venice, Italy, and across open seas; whether hunting treasure or helping someone locate a missing relative, the stories of Corto Maltese have thrilled millions across Europe.

Pratt’s imaginative scripts place his hero in the reality of the early 20th century. From the Great War to meeting Ernest Hemingway, Herman Hesse, and Joseph Conrad, the sailor Maltese crosses borders, seas, and oceans with the mind of a philosopher and the fists of a man who could care less what the odds are.

While the series has been reprinted in English before it has never been done with such care and respect as in this new edition.

The first in a series of 12 volumes that will eventually reprint the entire run of Corto Maltese, Under the Sign of Capricorn brings together six interconnected short stories that Pratt wrote while he lived in France. It serves as the perfect introduction to the character. Within six or seven pages it will be hard for anyone who loves comics and graphic novels to put this book down. Even though the character is now over 40 years old, he is as timeless as Batman or The Man With No Name in the Sergio Leone's film series that made Clint Eastwood a star.

After defending a weak, small man with a penchant for drink known as The Professor from a wild bully, Corto Maltese defines himself “Maybe I’m the King of the Idiots, the last representative of an extinct dynasty that believed in generosity . . . in heroism!”

There are hints of lyrical poetry in the world-weariness and cynicism of such statements. When Maltese asks the professor what he likes about the place they are staying. The answer is straightforward, honest and direct “The rum, and then . . . for me one place is as good as another . . . you know nothing about me besides the nonsense repeated by those who think they know everything.”

Pratt writes with notable economy and directness. When Maltese is asked to lead an expedition to find a young man’s half-sister, the young man sweetens the offer with a bit of a bit of honey-flavored words. Maltese replies by saying “Listen Tristan, I don’t need to be flattered to be convinced to do something. If I accept it’s only because it’s worthwhile to me. We’ll leave tomorrow for Bahaia!”

The reply comes in a single panel and inside a single word balloon. It is significant that Pratt didn’t stretch this out. It is the epitome of straightforward calm and cool.

In the world of graphic novels and comic art, translating a work such as Corto Maltese between two different languages is complicated. Not only does the meaning of each single sentence have to be spot on, the feel and meaning behind the writer’s intent as it relates to the art has to be conveyed accurately as well.

EuroComics tackles this difficult job by engaging leaders in the fields of comics, language, and translation.

Simone Castaldi, Associate Professor of Romance Languages and Literatures at Hofstra, and Dean Mullaney, who has won both Eisner and Harvey Awards as the editor of The Library of American Comics were able to work directly from original Pratt’s original scripts.

This is the artistic equivalent of having the master tape when transferring Bob Dylan’s Blood on the Tracks to high definition CD. There is a precision, a warmth, an inclusiveness in this translation that earlier reprints have somehow never been able to achieve.

For those new to the series, this means a lot. They will discover Corto Maltese in the best possible format. The adventure is breathtaking and filled with excitement. The stories are wonderfully engaging and as close to what the author wrote as possible. For those who have read the series before there are discoveries to be made in the fresh translation.

Pratt wrote and drew from experience. A short biography at the end of this collection tells of Pratt’s early life in Venice, Italy. That city’s mix of cultures and people from around the world gave him a tremendous advantage when he decided on a path in art and writing.

His love of adventure literature by authors such as Robert Louis Stevenson and others is evident in the way he paces Maltese’s adventures. When he discovered American adventure comic strips, Terry and the Pirates by Milt Caniff is singled out as a favorite. You can see Caniff’s love of shadow and dark lines reflected inside Pratt’s own work.

That line is filled with energy creating action scenes that stretch out wordlessly for over eight panels or more—scenes that will bring you to the edge of your chair as you fall into the power that Pratt creates.

On the other side there is the quiet thought found in human expression in which Pratt approaches genius. A simple line above the brow of Maltese brings you inside his nearly impenetrable mind. Round, open circles surrounded by small dots of freckles remind you of the being a child and the wonder of hearing a story for the first time. Pratt’s work celebrates the beauty of art seen in black and white.

This is the best of European storytelling coming to a new audience with the beauty and intelligence of the author remaining intact.

It is also a fantastic adventure that combines Hemingway, Hesse, Leone, and London into something new.