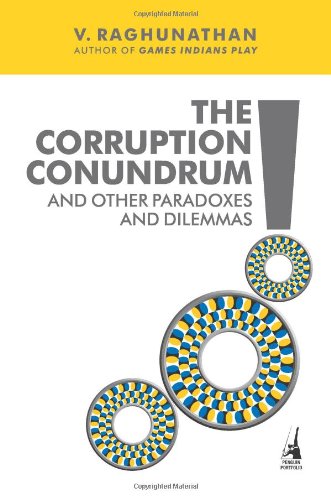 The Corruption Conundrum is not for those with advanced scientific interests but presents “a kaleidoscopic view of how paradoxes and dilemmas touch our lives from time to time.”

This reviewer likens V. Raghunathan to an Indian Martin Gardner who writes so entertainingly and charmingly, you may not realize you are learning.

A paradox is something that is logically consistent but seemingly impossible. Self-reflection is at the heart of many a paradox. For example there is Bertrand Russell’s barber, the one who only shaves those who don’t shave themselves. The paradox? Does the barber shave himself? And another example, if you keep patching a sock with new material when it gets a hole, at what point is that sock no longer the same sock? Paradoxes tend to be side effects of taking ideas to their limit, which can tell us about the limits of logic, or the limits of science, or the limits of paradox. Some paradoxes depend on the belief, for example the belief that statistics can be beaten (without first changing the laws of physics).

In writing on the topic of paradoxes, ethical dilemmas, and Catch-22s, Mr. Raghunathan provides entertaining examples, even making fun of himself in the telling. The many asides and jokes can remind one of a stand-up comedian giving out paradoxes as throwaway one-liners. If you don’t like that one, here’s another, another, and another. The paradoxes range from ancient Greece to modern India, and dilemmas from college admissions to Wall Street. And not all paradoxes are funny or solvable. A serious example: There is no ideal voting systems if a majority is required when there are more than three contestants.

In an exploration of paradoxes in economics, Mr. Raghunathan defines rationality in terms used by economists. For an economist, a rational person is one who
• Prefers more reward to less, the risk remaining the same.
• Prefers less risk to more, the reward remaining the same.
• With every incremental unit of risk, demands the least amount of additional reward that was expected for the previous unit of risk.

Mr. Raghunathan believes this definition of rationality under many conditions is irrational, and notes that as “ laboratory rats have been found to be . . . rational,” so that “once you realize that rats are perfectly rational, you can excuse economists assuming no less of humans.”

This economist’s definition of rational ignores much of real-world behavior, in particular that people value money (as risk and reward) differently in different contexts. To hold values more important than money is considered by economists to be irrational, and “What can be said of a body of knowledge that ignores fundamental human nature?”

The author goes on to explain several differences between the standard economic model of rationality and behavioral economics, and uses game theory to explore this difference. The advantage to using game theory show ways out of paradoxes and traditional economists version of irrationality showing tradeoffs on the conflict between self-interest and common benefit. The one flaw in the book is in the presentation of game theory. Game theory is explored without an explanation of what it is or what it means in the larger context. Only after several complex examples are presented is the explanation provided.

The larger context of game theory and behavioral economics is an exploration of how can we persuade ourselves to do the right thing. And this message would have had an easier time being understood if the horse were placed in front of the cart. Here the author was more self-involved in the game of game theory than in keeping the reader’s interest. Which is itself a paradox because the author also makes the point of identifying wrong type of individual (the standard economist) who, “shows obsessive attachment to action . . . and hence takes you away from the correct path.” (Which may cause the reader to ponder irony and the paradox of irony, that no one really knows what it is.)

Several moral dilemmas are explored, starting with simple cases, a teacher’s dilemma in changing grades for students under exceptional circumstances, progressing to more difficult dilemmas, an exploration of Garrett Hardin’s The Tragedy of the Commons, dilemmas of corruption, and on life and death issues such as mercy killing. All dilemmas depend on determining the greater good. In some instances any choice, even the choice of doing nothing has consequences. If any one part of the book shows Mr. Raghunathan’s exceptional skills in ethics as story telling is his self-restraint. He does not always provide solutions but simply describes the context and asks, What would you do?

In another chapter, Mr. Raghunathan then explores the paradoxical environment of auctions, where those who are looking for bargains often over-pay by getting over-excited. Without self-restraint, the goal becomes one of winning and not of the value of the object bid for in relation to the bid. The lessons of this chapter are similar to the William Ury’s Getting to Yes. The only way to maximize your wins may also be paradoxical. You first have to be “less keen on winning.”

Mr. Raghunathan explores the seeming paradoxes of statistics, as when travelling you may meet acquaintances in out of the way places. This seeming paradox, along with shared birthdays among members in a arbitrary group is merely statistical. Other seeming paradoxes are due to non-linearity, for example a paradox can occur from the effect of compound interest. Over time under high interest rates, the principal can become insignificant in respect to the interest owed (what is known as the “vig” to a loan shark).

Each chapter begins with a relevant quote, and the chapter on Democracy and choice begins with a quote from Kenneth Arrow, an American economist and Nobel Prize winner: “The only voting method that isn’t flawed is a dictatorship.” As mentioned earlier, the paradox in democracy comes from trying to convert plurality, a vote divided among three or more contestants with no majority, into a majority. Whether by repeated voting rounds or weighting mechanisms, no method both works and remains fair. The Condorcet paradox shows the difficulty in voting rounds. Say you have three contestants, A, B, and C, and all win something less than 50% of the vote. No matter how many times you re-vote, voters may prefer A over B, B over C, and C over A. In this instance, no candidate may ever get a majority.

One particular paradox of choice comes from the “framing effect.” The words you use in asking the question of choice can change a yes into a no, or a no into a yes. Another paradox explored is in the realm of public office and ethics, where “corruption is universally disapproved of, yet universally practiced.” Mr. Raghunathan pins the blame not so much on individuals so much as on the system in which the individual acts. Systems that reduce or prevent corruption tend to have a greater amount of transparency. Systems that tend to have a greater amount of corruption besides being less transparent also has greater social deference to authority (i.e. lack of accountability). Accountability, (or any right) is of no value if it is not practiced. Here Mr. Raghunathan misses the opportunity to explore the two greatest dilemmas and paradoxes of politics, that power has a tendency to corrupt—and who watches the watchers?

Paradoxes are explored which require some basic knowledge of economics, which is thankfully provided by the author. The “paradox of value” poses the question: “Why are some things, for example diamonds, of relatively little use to society, so much more expensive than other things, like water, which is of far greater value?” The economist Adam Smith provides one solution to the paradox of value: The amount of labor that goes into producing an article determines its price. Since then, that answer has been adjusted with the “concept of marginal utility” by economist Friedrich von Weiser, who noted that as abundance goes up, value goes down. And this solution explains the varying price of a cup of coffee, which depends on whether you make it yourself, buy it from a vending machine, or a Starbucks, or a sporting arena (where you can’t bring drinks in from the outside). Markets that set values may be separated by clientele and the (presence or lack of) available alternatives.

Other economic paradoxes can come about through the repackaging and converting of debts into assets. Here the market bets on a debtor’s ability to pay in the future, and this betting taken to the extreme, lead to the recent debtor meltdown. There is an economic term for this kind of bet, the “uncertainty equivalent.” The uncertainty equivalent is the sure sum you are willing to pay right now, set off against getting an uncertain sum in the future. The uncertainty equivalent explains why individuals plea bargain or otherwise settle out of court for a suboptimal sure thing instead of gambling on a decision in court. In financial markets, the uncertainty equivalent may be handled by a middleman called arbitrage. Paradoxes from arbitrage can be avoided by diversifying risk, the simple notion of not putting all your eggs into one basket.

Mr. Raghunathan identifies the one question that comes up again and again in economics (See the previously NYJB reviewed, Everything Is Obvious: Once You Know the Answer by Duncan J. Watts), on the possibility of prediction. The question is stated as how to recognize science from pseudo-science? Mr. Raghunathan answers this simply and clearly. We believe what we like to believe, and “liking” is not easily dislodged by reason. Because there is no such thing as an expert in the world of finance, and because scientific methods are mixed-in, not rigorously applied, in the field of investments, investments are fair game for anyone who claims to be an expert. And pseudo-science often looks like science. For example, in the case of technical analysts who go after false patterns, Mr. Raghunathan calls these kinds of analysts “chartists,” and says they are no more than charlatans.

The Corruption Conundrum was originally published in India for an English speaking Indian audience. Improvements for this book, apart from the need for an index, would include a few footnotes to translate the Indian colloquialisms—though most can be understood from context.