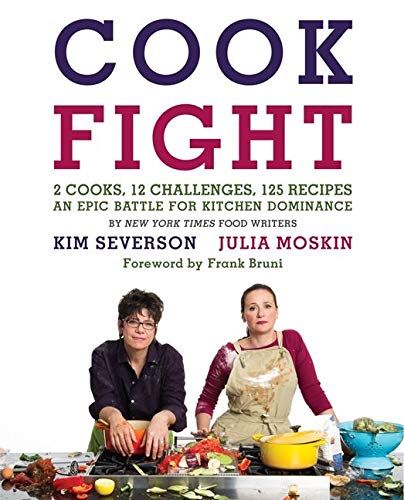 “Cookfight is an engaging book about what we each bring into our kitchens besides the ingredients. . . . very entertaining.”

A few weeks ago the Times ran a profile of Christopher Kimball, the bowtie sporting publisher of Cooks Illustrated and host of the PBS series America’s Test Kitchen in which Mr. Kimball declared that “Cooking isn’t creative and it isn’t easy.”

This week, the Times ran an opinion piece written by the author and critic William Deresiewicz in which he argues that “food . . . is not art.”

Which brings us to Cookfight, written by two acclaimed food writers of the New York Times who engage in a (faux) fight for kitchen dominance.

Do you see a pattern here? Now that the bitter election season is coming to a close is cooking going to replace politics as the source of our divisiveness? Why fight at all?

To borrow from Rodney King, can’t we cooks just all get along?

Of course Cookfight isn’t really about stirring the pot—or is it? (New Yorkers are by nature a very competitive bunch.) Like any cable news show, the hyperbole in Cookfight is designed to entertain rather than provoke.

Real-life colleagues and friends Kim Severson and Julia Moskin are merely posing as frenemies for the sake of the book—if they really wanted us to line up behind our preferred New York Times food writer they would have provided an interactive feature via the Internet asking us to vote at the conclusion of each chapter.

The idea for the book grew out of a 2009 piece in the dining section of the Times in which each writer was given the challenge of preparing a dinner party for under $50 that was to be judged by Frank Bruni, then the Times restaurant critic. As Mr. Bruni explains in the foreword to Cookfight, he took the easy way out and declared a tie, but the idea for the cooking challenge was born.

The budget challenge reappears as the first chapter in Cookfight followed by 11 more for each month of the year. These include such topics as the Comfort Challenge for February, the Mothers’ Challenge for May, the Picnic Challenge for July, all the way to the Open-House Challenge for December. For each challenge, Ms. Moskin and Ms. Severson provide one complete menu accompanied by an introductory essay.

While this is a good format for an ongoing monthly newspaper column where the reader is able to cherry pick recipes, it works less well as a cookbook.

It’s not that the writing isn’t terrific, it is. Or that the recipes are no good, they are. In a cookbook, what makes it useful is the organization of the thing. So to remember that the recipe you wanted to try for say, Sticky Toffee Pudding, appeared in the February chapter rather than just turning to a chapter on desserts, can make for a frustrating experience.

Of course you can find it in the index, but the point is that a cookbook designed around two menus per chapter makes for a kind of hodge-podge rather than something cohesive.

Still, both Julia Moskin and Kim Severson are very good at conveying their Everycook credentials and choose recipes the way any of us would—from our own collection of recipes gathered over the years from friends, relatives and treasured cookbooks.

This is what is at the heart of Cookfight. Given a set of cooking challenges, no two cooks are alike. Our cooking styles and tastes are as different as we are. Given a cook’s recipe collection you can begin to sketch a portrait of that cook’s personality and background.

Kim Severson and Julia Moskin are polar opposites both in style and approaches to cooking. Julia Moskin is all Upper West Side Francophile whereas Kim Severson is all edgy Brooklyn feminist.

One of the most obvious examples of their differences is in the April Fancy Challenge:

I think you know which one was raised in New York and spent a lot of time in France.

Cookfight is an engaging book about what we each bring into our kitchens besides the ingredients. It may not become a cookbook classic, but it is very entertaining.