A Convenient Hatred: The History of Anti-Semitism 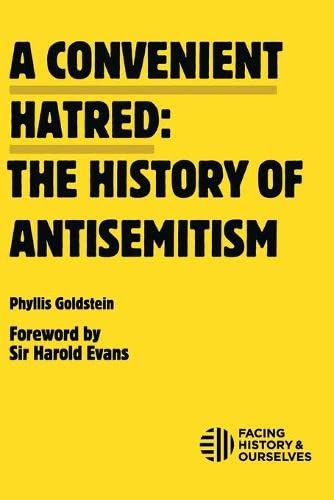 “A Convenient Hatred is a profoundly authoritative resource for educators. Its examples, stories, references, maps, pictures, and illustrations bring the history of the Jews to life in a powerful way not experienced since James Michener’s The Source, a work of fiction. . . . With impeccable references and well-researched examples, Ms. Goldstein has created a tour de force.”

A Convenient Hatred, with foreword by Sir Harold Evans, chronicles the evolution of anti-Semitism from the time of Alexander through the Holocaust and modern Israel.

This powerful treatise explores with exquisite detail the pernicious foundations of bigotry against Jews, from ancient times through the dark ages, the enlightenment and into contemporary examples. A Convenient Hatred could just as easily been called A Convenient History, as it illustrates the magnitude of anti-Jewish vitriol, loathing and detestation over the ages, leading to a unique and mendacious version of history that blames Jews for impossibly disparate and disconnected events and catastrophes.

Ms. Goldstein has produced a masterful exposition on the vulnerability of Jews throughout history, highlighting how malicious pagan and Christian leaders exploited the Jewish people. She also addresses the unending value of education within Jewish culture, a trait that has served them well for dozens of centuries. That Jews have been able to survive at all seems miraculous, considering the fact that until recently, Jews were largely forbidden from owning land and property and from most skilled occupations—including crafts and guilds—and were forced to take up the most distasteful occupation among Christians: money lending.

A Convenient Hatred is a profoundly authoritative resource for educators. Its examples, stories, references, maps, pictures, and illustrations bring the history of the Jews to life in a powerful way not experienced since James Michener’s The Source, a work of fiction.

A Convenient Hatred communicates the magnitude of anti-Jewish prejudice throughout the centuries, offering well-researched examples of why so many people throughout time have found it convenient to hate Jews. A Convenient Hatred belongs globally in every high-school history classroom. With impeccable references and well-researched examples, Ms. Goldstein has created a tour de force.

The author carefully examines the origins of anti-Semitism in an age when Jews were forced from their ancestral homes and temples in ancient Israel to Europe and Asia. She methodically details the separation of Jews from Christians leading to centuries of Jewish slavery, incarceration, and extermination during the Crusades, the Spanish Inquisition, The Reformation, and the English Expulsion.

The rise of the Islamic empire and holy wars are also carefully explored. Centuries of intolerance produced the Diaspora, in which Jews fled to safe haven in places far and wide, but were again faced with extermination when blamed for the Black Death (plague) across Europe. This marked a period in which Jews were charged with ritual murder and blood libel; as well, the Talmud was universally attacked by Christians and Muslims. Jews were also almost universally oppressed during the Dark Ages. They sought reprieve in places as disparate as Poland and the Ottoman Empire. But for hundreds of years, Jews remained ostracized, antagonized, and isolated.

The ages of enlightenment and nationalism are also painstakingly explored. Ms. Goldstein proffers “the power of publicity” as a tool used by anti-Semites to attack and condemn Jews in a prolific manner.

The same level of discriminating detail continues in an examination of anti-Semitism during Renaissance France and Russia, continuing into the age of nationalism and World War I. Ms. Goldstein carefully describes the consistent deleterious effect of anti-Jewish propaganda in incongruent Renaissance societies with France being democratic and Russia communist.

The age of written communication via printing presses almost immediately delivered anti-Semitic books, such as The Protocols of the Elders of Zion, one of the most significant attacks upon Jews. She describes Hitler’s rise to power largely upon the backs of Jews, through propaganda and putsches by the proletariat against Germany’s Jewish population. The “turning point” came in 1941 with the Nazi establishment of the “Final Solution to the Jewish question.”

Finally, Ms. Goldstein adroitly illustrates anti-Semitism after the Holocaust, throughout the Cold War, and into contemporary society, which she calls, “a convenient hatred.” Here, nationalism and xenophobia collide in a perfect storm of bigotry and persecution. The result of this collision is a brainwashing of impoverished youth, the economically and socially oppressed, and the politically disadvantaged, resulting in a unified hatred of all things Jewish, especially Israel.

Ms. Goldstein calls to mind a speech by Holocaust survivor Elie Wiesel, in which he states that we cannot judge contemporary Germans for the genocide perpetrated by their ancestors. At the same time, all Germans can be held accountable for preserving the memory of the Holocaust—for its link from past to future holds in the balance the potential for the survival of the human spirit as well as the destiny of the Jewish people.

A Convenient Hatred is a powerful, historically astute, contemporary masterpiece and a superb illustration of prejudice. It is a groundbreaking educational tool and an indispensable textbook for students of history, anthropology, psychology, and sociology. Phyllis Goldstein’s lucid and cogent examination of the history of anti-Semitism is a seminal work, lucidly explaining the magnitude of illogical hatred and its centuries-old influence against the Jews.