Contraband Cocktails: How America Drank When It Wasn't Supposed To 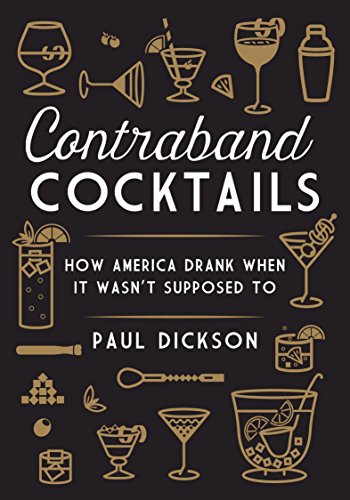 Contraband Cocktails: How America Drank When It Wasn’t Supposed To by Paul Dickson is a slim volume of cocktail history and recipes. Cocktails, Dickson claims, came about during the Prohibition era as an attempt to make palatable the bathtub gins, ryes, and distilled spirits that were illegally made with sugar, bitters, and other additives.

Contraband Cocktails is a neat book as carefully crafted as some of the best cocktails are: without a word out of place and a concise history that is as much entertaining as it is educating.

Readers get a firm taste of the Roaring (drunk) 1920s as Dickson digs up the dirt on senators and congressmen who illegally imported their booze despite having voted the nation dry, as well as what was really going on despite the romanticized notions of movies and novels depicting gang wars and bootlegging.

Authors, artists, musicians, and critics during the time from Fitzgerald to Mencken were waxing eloquent about cocktails and the public was drinking it up while the most fashionable hosted cocktail parties. America was dry but really was rather wet: alcoholism was on the rise and there were plenty of deaths due to unsafe mixtures; police were on the payrolls of bootleggers and speakeasies to look the other way; and there were more places to find a drink during 1920–1933 than there had been when alcohol was legal.

The last half of the book is devoted to recipes Dickson found combing through archival materials and chance finds published during the wettest era (Prohibition). It includes historical notes about the creator and his creation, as well as demarcating which drinks have been included for historical purposes but probably ought not to be drunk—or with caveats on the strength of the cocktail.

Contraband Cocktails is a fabulous work that ought to be in any hipster’s library or on the reading list of faux-speakeasy bartenders, but otherwise absolutely anyone with a fascination for the 1920s, who loves The Great Gatsby (films or book), or who are interested in the history of alcohol will definitely need to read this.