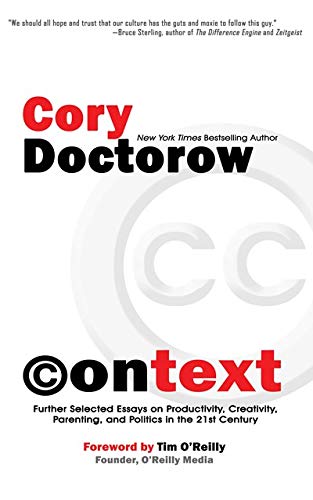 “Cory Doctorow’s Context is a treat for those who live in the digital world—as well as for those who would like to know more about it.”

Cory Doctorow’s Context showcases his ability to explain how the many facets of technology impact the user and the marketplace. Context gives decision makers a blueprint for well-considered decisions in the costly and ever-changing digital world.

A prolific author, journalist, and blogger, Mr. Doctorow has established himself as one of the more important voices of the Internet generation. He does his homework well, which sets him apart from many others who often rush to embrace the “new”—no matter what the downsides may be.

A crusader for fairness in the realm of evolving digital copyright and a veteran of the Electronic Frontier Foundation, Mr. Doctorow also has a distinguished record of activism in the physical world.

A great benefit to any authors’ collected essays is the freedom the reader has to pick and choose amongst the rich variety of thought which has been carefully assembled in one handy volume or in an defined digital space. So one should never pass up the opportunity to spend time with the selected writings of a favorite author, or an author the reader wants to meet for the first time. In this collection of forty-four previously published or online essays and stories, the essays average four pages each. While they don’t have to be read in order, recurring subjects and themes can be found throughout the book.

In Context, Mr. Doctorow digs deep into the fabric of digital life, looking at it from all sides. He cuts a wide swath through the eclectic digital world, from the politics and economics of search engines, to digital content licensing, to the debate of “streaming versus downloading,” the ever-popular reality of spam, the personal hazards of “phishing,” pay firewalls, Rupert Murdoch, Microsoft, and finally how this all relates to the real meaning of “rock ’n’ roll.”

Mr. Doctorow hits his stride in “Can You Survive a Benevolent Dictatorship? The press loves the iPad, but beware Apple’s attempt to shackle your readers to its hardware.”

He takes Apple to task for the iPad’s closed system approach which translates into his observation that “Apple has absolute dominion over who can run code on the device . . .” so “if you’re contemplating a program to sell your books, stories, or other content into the iPad channel with hopes of it becoming a major piece of your publishing business, you should take a step back and ask how your interests are served by Apple’s shackling your readers to its hardware.”

Authors, artists, and other creators are locked into Apple’s hardware platform as well as their App store, as Apple technically prohibits people from simultaneously creating content for multiple platforms, such as for Google’s Android OS, a competitor. The sleek, well-designed iPad may be a game-changer, but for different reasons than many people think.

In this and in other essays, Mr. Doctorow’s vitriolic level can be turned down a few notches in the “us-versus-them” debate, e.g., “Apple can sue you into a smoking hole.” Unpleasant imagery detracts from his otherwise excellent explorations and explanations. Still, he’s mild compared to others who see the Internet as a playpen for unappealing metaphors and questionable expressions.

Cory Doctorow’s Context is a treat for those who live in the digital world—as well as for those who would like to know more about it. For readers who still cling to print, the paperback will fit in your pocket or handbag. Pick it up and read it. Otherwise, download it to your device of choice.