Consuming the Congo: War and Conflict Minerals in the World's Deadliest Place 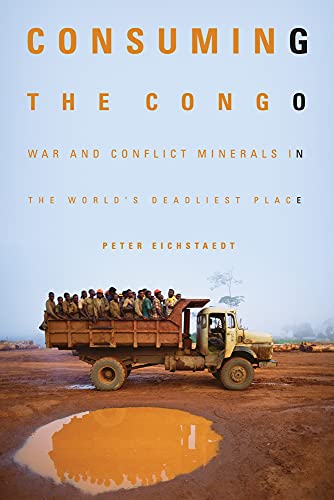 “Peter Eichstaedt’s Consuming the Congo is a comprehensive and thorough exposure of brutality that has not been equaled since the genocide in Rwanda. . . . The book is a tour de force of reporting.”

“I was so moved, Your Excellency, by the people’s stories that I took the liberty of promising them that in future you will only kill them for crimes they commit.”
—John Harris, speaking to King Leopold II of Belgium in 1917

Since King Leopold II made the territory that is now the Democratic Republic of the Congo his own personal property, life there has been dominated by military violence and atrocities. In Leopold’s day, mounds of severed hands were photographed as his soldiers forced slaves to collect rubber.

Not much has changed in this country that is about the same size as Europe. It is still the site of one of the worst humanitarian crises, one that has lasted nearly 300 years. Between August 1998 and April 2007, 5.4 million lost their lives through violence, rape, and forced labor.

Peter Eichstaedt’s Consuming the Congo is a comprehensive and thorough exposure of brutality that has not been equaled since the genocide in Rwanda.

The book is a tour de force of reporting; Mr. Eichstaedt, a journalist who works for the Institute for War and Peace Reporting in the Hague, goes right to the heart of the story, interviewing ragged refugees as they flee from a butchering militia, sitting in mud huts talking to villagers who’ve had limbs severed in the violence, as well as gathering the views of an impressive number of experts, in the Democratic Republic of the Congo and outside of it.

After King Leopold was forced to cede his colony to the Belgian state (he received 2 million pounds in compensation, a sum worth about $20 million today), the worst of the atrocities were stopped, but the Belgians took the country’s resources and did little for the people. Forced labor continued in the Belgian Congo, as it was called at the time, and there was little chance for the Congolese to receive and education or decent health care. They had no right to own land.

When the Belgians pulled out in 1960, only 16 Congolese had university diplomas—out of a population of 60 million.

Independence put no end to violence and the humanitarian crisis. Shortly after the country split into two halves and immediately plunged into civil war. The first prime minister, Patrice Lumumba, was assassinated shortly after taking power. He was replaced by Joseph Desiré Mobutu, who renamed the country Zaire. Mobutu got U.S. backing for keeping the Russians and the Communists out of the country, and, in exchange, ran it with an iron hand and plundered it. In the early years, he consolidated power by publicly executing political rivals. One rebel leader had his eyes gouged out, his genitals ripped off, and his limbs amputated one by one before he mercifully died.

When the economy slumped, he printed more money, destroying the economy with hyperinflation. The West bailed him out. He stashed away nearly $5 billion. He gave shelter to the Hutu, the perpetrators of the Rwandan genocide in 1994. This finally led to his undoing, although he escaped with his life and his fortune.

The aftermath of his rule saw a number of foreign and native militia’s fighting in the Eastern part of the country. These militias used the bases they had established inside the DRC to plunder. The war became self-financing as all sides scrabbled for diamonds, gold and timber.

This is essentially the situation today, although the country has renamed itself the Democratic Republic of the Congo, and held elections which observers say were fair. About 70 percent of the Congo’s coltan—an essential component in making mobile phones—is being exported illegally by the militias, who use slave labor to mine it.

The country is still in a dire state. Aid organizations say about 1,200 people die daily due to the effects of the conflict, hunger and disease. The DRC has AIDS, low life expectancy, and a high rate of child mortality. More than two million Congolese are internal refugees. National output and government revenue slumped to near zero, while external debt is building up.

Or a description of a militia attack on a village: “It was a bloody attack. They came in the day, at 11:00 A.M., from the Blue Mountains. They didn’t come to look, only to kill. They came with machetes, arrows, and hatchets. Those who were lucky escaped, but 98 villagers were slaughtered.”

Mr. Eichstaedt’s narrative is a bit unfocused: It tends to digress into details about the subject without linking back to the main theme. But what emerges is a picture of endless, continuing atrocities. There is no political motivation, only gain and competition for gain.

Forces in Uganda and Rwanda have teamed up with indigenous militia’s to fight for control of mines. In a space of 18 months from 2002 to 2003, Hema and Lendu militas, supported by Uganda and Rwanda, gained and lost control of the Mongbwalu gold mine five times. Thousands of civilians were killed in the process. The slaughter forced tens of thousands to leave their homes with nothing but the clothes on their backs. Mr. Eichstaedt talks to the protagonists, in the armies, the innocents, the aid workers—all those who have something to say.

There is an excellent chapter describing the supply chain for conflict minerals, and the role of intermediaries in getting them out of the country, and so confounded with minerals from other sources, that buyers cannot say where they are from. The Dodd-Frank law obliges buyers to audit their supply chains, and this will hopefully have an effect on the intermediaries. But there are so many buyers, for demand is huge, that it will be difficult to track given shipments of tantalum or rare earths.

Despite its erratic narrative, Mr. Eichstaedt’s book covers a lot of ground. It is certainly of great value to serious students, but also to the increasingly large number of policymakers who have to make decisions about commodities from Africa, or about foreign aid policy.

The early 20th century author Joseph Conrad used the Congo as a kind of metaphysical mystery. There is no mystery, however, to the brutality of the Congo. A rogue army leader there, named Joseph Kony, enslaves male children for soldiers and mine workers, while he turns female children into concubines.

The banality of that sort of evil, as Hannah Arendt would put it, is patent.