A Conspiracy of Bones (19) (A Temperance Brennan Novel) 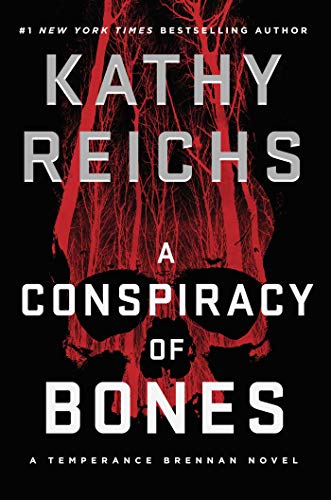 “Regardless of whether a reader is dipping into their 19th Temperance Brennan novel or their first, Kathy Reichs proves once again why she remains at the top of the bestseller list year after year.”

New York Times bestselling author Kathy Reichs returns to the mystery scene with the 19th book in her Temperance Brennan novels, A Conspiracy of Bones.

To keep things fresh in such a long-standing series, Reichs brings something new to the table.

Brennan doesn’t trust her own mind.

Usually the smartest person in the room, forensic anthropologist Brennan faces something very different this time around. “Reactions to pressure vary. Some people are ductile, able to stretch. Others are brittle, powerless to bend.”

Temperance Brennan has never had to test her mettle in the ways she does in this latest installment. In the past, she has always managed to maintain a detachment to events occurring around her. She uses logic and science to manage the most awful of crime scenes.

Now that cool detachment is put to the test, which begs the question, will she bend? Or will she break?

“Tempe,” as her friends call her, is recovering from neurosurgery for an aneurysm as the novel begins. Overcoming a potentially fatal condition rocks Brennan back on her heels, she’s unused to feeling vulnerable in any aspect of her life.

Along with the fears about her own mortality, Tempe also has to wonder if events she experiences are real or a combination of grief over her recently murdered mentor and her damaged brain, inventing people who aren’t real.

Late one night, Brennan sees a strange, trench-coated figure outside her townhouse. She follows him out into the dark, only to find herself confronted by a pair of dogs fighting over a dead bird.

“Clamped in the dog’s jaw was the severed head of a goose, ravaged neck glistening black, cheek swath winking white like the smile of an evil clown.”

She flees home, her questions about the strange man unanswered and uneasy from the strange encounters, both human and canine.

The opening chapter reads closer to psychological suspense then the typical murder mystery Reichs has built her career on.

Once safely back in her townhouse, Brennan reflects on her current situation. “I’d hit a rough patch of late. Healthwise. Personally. Professionally. The last self-inflicted.”

Adding to the complications of her questionable health, Brannan’s new boss, Margot Heavner, is not her biggest fan. She and Heavner have history. “Heavner had leaked privileged information on a radio show hosted by a narcissistic crackpot. Information that had hurt the victim’s family and may have prevented the killer’s conviction.”

And Brennan made Heavner’s actions public. An action that raised Heavner’s ire and put Brennan at the bottom of Heavner’s list for work at the lab that Tempe has called home for years.

It quickly becomes clear that Heavner wants Brennan expelled and won’t rest until she succeeds in ousting her.

But someone out there doesn’t want Brennan to stop doing what she does best, solve murders.

Photos of a crime scene, sent from an anonymous source, show up on Brennan’s cell phone.

With no explanation and no idea who is behind the photos, Brennan feels compelled to dig deeper, throwing her into a complex web of crimes well outside her comfort zone, including the Dark Web and cyberspace.

To up the stakes, she’s forced to investigate under the radar of her usual official channels. Steps that will jeopardize not only her own reputation, but that of the few friends she has willing to help.

As the battle over her place in the lab escalates, Brennan continues to question everything. What’s real and what’s a quirk of her injured mind.

The mystery contains enough twists to keep a reader turning pages. Reichs keeps a steady pace through most of the chapters, infusing them with the occasionally more literary phrase.

“When I close my eyes, I can still feel the weight of the afternoon heat on my skin. Smell the mowed hay and see the moths swirling in the dusty sunlight.”

She also lightens her work with moments of humor, as in her descriptions of characters. “We turned. E. Desai was hurrying toward us with all the grace of a startled wombat.”

Readers familiar with the series will likely have a deeper understanding of how different the world has become for Temperance Brennan, but the novel can still be enjoyed as a standalone.

Regardless of whether a reader is dipping into their 19th Temperance Brennan novel or their first, Kathy Reichs proves once again why she remains at the top of the bestseller list year after year.