Consider the Fork: A History of How We Cook and Eat 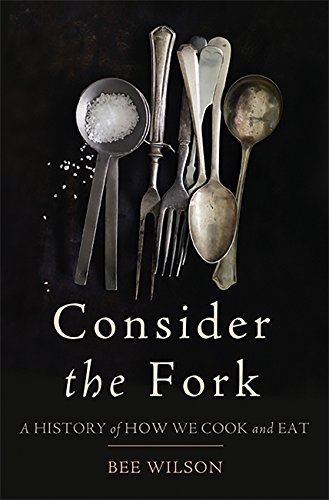 “. . . chockfull of revelations that any cooking enthusiast will eat up with a spoon.”

When we begin to prepare a meal we often pause, if only for an instant, to consider the source of the recipe we are using. Whether it came from your grandmother or today’s issue of the New York Times, every recipe contains its own family tree that leads you back to its source going back hundreds or even thousands of years.

But do you ever consider, as Bee Wilson asks, the source of the cooking implements you are using to prepare that recipe?

In Consider the Fork, Ms. Wilson takes the reader beyond the recipes to get to the history of cooking itself.

The implements used in cooking, she posits, represent advances in technology equal to advances in industry, telecommunications or any other sector. If technological breakthroughs make our lives easier and more efficient then consider what the first knife, spoon or bowl did for our ancient ancestors.

Even more astonishing is that while the designs have been tweaked over the millennia, we are still using knives, spoons and bowls in our daily lives today (the fork came later).

For those of you who think a book about the history of culinary technology sounds dull as dishwater, think again. Bee Wilson knows how to keep you entertained while informing you about the history of all manner of cooking gadgets and appliances. She knows just when to inject a soupçon of humor or throw in a personal anecdote to prevent your eyes from glazing over.

Consider the Fork is an impressive scholarly work to be sure, but it is never pedantic. More than a historian, Ms. Wilson is the kind of food writer who makes you feel as if you’d be welcome in her kitchen.

There is also a shout-out at the end of each chapter to a kitchen implement that otherwise doesn’t fit in neatly to the chapter category, like tongs at the conclusion of the chapter on eating utensils, or the egg timer following the chapter on measurements.

These chapter-ending homages are each little jewels and should not be skipped: “Timing boiled eggs is almost the only practical occasion in which we still use the medieval technology of the hourglass . . . If hourglass egg timers endure, it is surely because of their symbolic value: to watch the sands of time running out is still a powerful thing.”

Reading through each of the chapters, you quickly realize that cooking is at the crossroads of history, science, anthropology, geography and sociology. In any given chapter, Ms. Wilson relies on an interdisciplinary approach to thoroughly explore the subject, leaving you with a deep appreciation for our rich (although skewed heavily toward the European/American) culinary history. Walking on two legs and language may be what distinguish us as humans, but surely cooking is not far behind.

One of the joys of reading Consider the Fork is discovering for yourself how few cooking innovations can really be improved upon. In her introduction, Ms. Wilson gives the wooden spoon as an example, but one that has actually taken a step back is the ice cream maker.

In 1885 a mother of four from North London was marketing Mrs. Marshall’s Patent Freezer that could produce ice cream in three minutes. Today, electric ice cream makers that will set you back from $100 to $200 can only promise ice cream in less than 30 minutes. The design of Mrs. Marshall’s freezer made all the difference, using a much larger cold surface area for the heat-transfer to occur than other commercial ice cream makers, thus speeding up the process. Unfortunately, she manufactured her product with inexpensive zinc, which, as it turns out, is poisonous, and the machines went out of use. But you have to wonder why has no one returned to her superior design and relaunched the machine using safer material.

Then there are the discoveries—or in some cases reminders—just how new some implements are that we now think of as having been around forever (unlike the wooden spoon).

Rather than spoiling the story of the fork, let’s take the OXO vegetable peeler for example. Who among us doesn’t love his or her OXO vegetable peeler? It’s a reliable kitchen gadget that most of us would never be without, and yet it has only been around since 1990.

As Ms. Wilson points out, “[t]he OXO peeler was a game-changer,” making peeling potatoes, apples and anything else a breeze instead of a chore. It also represents an example of kitchen technology that could be improved upon. Vegetable peelers have been around for over a hundred years, but none do the job like an OXO peeler.

Other technologies, like sous-vide (slow, gentle cooking in a vacuum-sealed pouch) seem like they were invented yesterday, when in fact the technology was first invented in the 1960s by French and American engineers working for Cryovac, a food packaging business. (That said, modernist cooking which includes sous-vide “represents the biggest rethink of kitchen technology since the microwave” according to Wilson.)

Consider the Fork is simply chockfull of revelations that any cooking enthusiast will eat up with a spoon. There are discoveries that will resonate with some more than others just as certain recipes do when perusing a cookbook for the first time. But one thing it is sure to do for everyone who reads it, it will get you to think about kitchen equipment in a new way.

The next time you step into your kitchen and take out your favorite soup pot or wooden spoon, you’ll pause to consider all those cooks who came before you who cooked with much the same instruments, in much the same way. When it comes to cooking, there is really nothing new under the sun.