Consent: A Memoir of Unwanted Attention 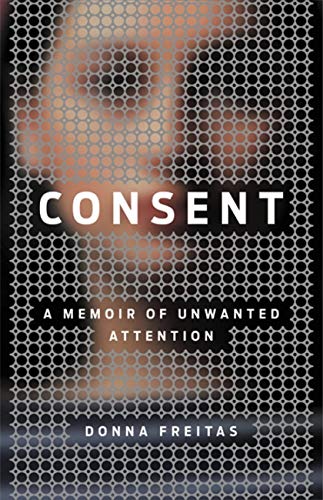 Imagine that you begin your dream doctoral program and immediately find a professor generous with his mentoring time. You share long, intellectual conversations in his office, discuss theories of theology over coffee. He mails you letters and then an article he’s written, and you realize (or wonder if you’re imagining?) that it’s a confession of love, though maybe an indirect one?

You avoid responding to his multiple requests to discuss the article, politely redirect, stop visiting his office, re-route your normal path through campus. His phone calls and attempted visits increase, his unopened letters literally pile on your table, the phone rings and rings, and, embarrassed and ashamed, you tell no one. Then, unable to reach you directly, this priest-professor starts writing letters to your dying Catholic mother.

This is the nightmare Donna Freitas describes in Consent: A Memoir of Unwanted Attention. Written over 20 years after the events that permanently altered her life, Freitas gives voice to victimization that can hopefully be better heard and understood after the #MeToo movement brought national attention to the all-too-common experiences of sexual harassment and gender-based violence in women’s lives.

Freitas’ current professional identity as an expert in Title IX and issues of consent informs how she frames this memoir, but the power of her writing comes from how she persuasively recreates the emotional landscape of her younger self.

We see Freitas’ passion and joy as she pursues the life of the mind and her dream of being a professor. This “most eager of students, bright-eyed, bushy-tailed, a veritable rabbit of talkative enthusiasm” morphs through the narrative into “the silenced, anxiety-ridden, nearly destroyed young woman that [she] became further on in [her] graduate-school years.”

Popular myths of trauma continue to focus on events that are physically threatening, matters of life and death, which is why this memoir is so compelling and important. Freitas captures the reality of psychological violence and its short and long-term effects, and she deconstructs her own fear and confusion over whether the invasive, obsessive behavior of her professor, her stalker, is somehow her fault.

Freitas moves effortlessly between scenes of her younger self and reflection from her more informed, but still emotionally affected current self. She reminds us of all “the ways that women must learn to become good actresses and excellent liars so they can endure and live as though nothing terrible has happened to them. Of the personal and professional cost of having to live with two brains, be of two minds, of the secrets a person’s own body can keep from her for years, of the ongoing feeling that somehow she is the one who failed and the damage this does to her sense of self, of her ability to perceive what is true and what is false about who she is and who she is not.”

Particularly painful is how Freitas and her readers recognize that, despite her many visible successes (multiple fiction and nonfiction books, speaking engagements at universities), she is still haunted by the career that could have been if her professor had ever taken no for an answer. She believed in, still believes in, the university as a special place of intellectual excitement and higher ideals, and she holds out hope that the institution can do better. Freitas notes, “Looking back, I would have been so grateful for anyone and anything that could have protected me from what I endured.”

Fortunately her memoir can serve as a layer of protection for others, both warning and comfort to vulnerable women trying to make their way in higher education. Readers simultaneously experience the ways Freitas suffered in silence and understand how she’s reconstructed her sense of who she is in the aftermath.

Consent should be required reading for university students, their parents, and those staff and faculty who can help make the difference between a dreamed-for education and the nightmare of an entirely different kind of education.

Chauna Craig is a staff reviewer at New York Journal of Books.