Consent on Campus: A Manifesto 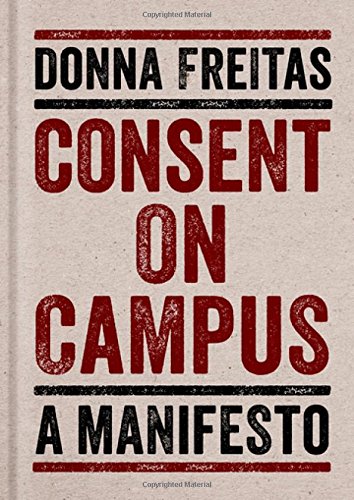 “Consent on Campus: A Manifesto is a timely book addressing many issues that today’s college students are facing. It is highly recommended . . .”

“What we have is a crisis in which college students are committing sexual violence against their peers without worrying about the consequences for themselves or their victims.”

In Consent on Campus: A Manifesto, Donna Freitas uses her own experiences, as well as her research expertise, to discuss the sexual assault crisis on college campuses. Throughout the book, Freitas examines the extent of sexual assaults at college, hookup culture, gendered norms, Title IX, and the complexity of consent, concluding with recommendations to improve the status quo.

Multiple surveys have shown that approximately one-fourth of respondents indicate having been sexually assaulted on a college campus. While the level of attention given to sexual violence on campuses has increased in the last several years, Freitas declares that we must do more. Colleges and universities, she states, are often more focused on avoiding lawsuits rather than getting to the root of the problem.

One of the ways colleges have tried to address the issue of sexual assaults is through Title IX. In Consent on Campus, Freitas provides an overview of Title IX, which was passed by Congress in 1972 and was initially intended for gender equity in college sports.

However, in 2011, the Department of Education’s Office of Civil Rights determined that Title IX also applies to sexual assaults. And, in 2013, President Obama signed the Campus Save Act, requiring colleges and universities to teach everyone on campus about sexual violence and prevention.

By speaking with students, Freitas has discovered that students do not like the existing hookup culture, but that their generation has been socialized to think it is normal. The vast majority of students find that hookup culture is disconnected and obligatory. Instead, they are looking for deeper connections and more meaningful sexual encounters with their partners.

Freitas suggests that the best way to disrupt this culture is to start in the classroom. Faculty should regularly have discussions with students about the hookup culture, consent, respecting others, the role alcohol plays in sexual assaults, and sexual privilege.

She claims that consent “is a way of being toward others.” By creating ethical expectations and values, colleges can replace the hookup culture with a culture of consent. And, consent does not merely refer to “yes means yes.” Instead, it is a complex topic that demands commitment, understanding, and respect for all parties.

Overall, Consent on Campus: A Manifesto is a timely book addressing many issues that today’s college students are facing. It is highly recommended for college administrators, faculty, staff, students, and anyone else interested in changing the culture of sexual assaults on college campuses.