Conscience: Two Soldiers, Two Pacifists, One Family--a Test of Will and Faith in World War I 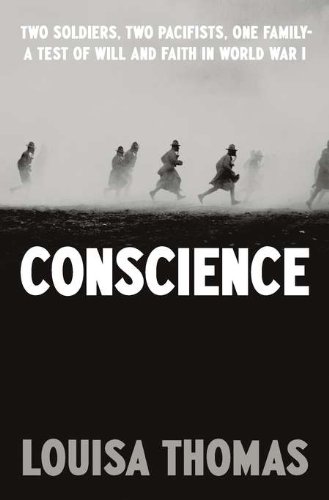 “The author offers considerable insight into the political climate in the country at that time—particularly President Woodrow Wilson’s tormented conscience regarding entry into the fray.”

Martin Luther once said, “War is the greatest plague that can afflict humanity, it destroys religion, it destroys states, it destroys families.” In her book, Conscience, Louisa Thomas paints a clear picture of the way in which World War I created conflict not only within a family, but also across a nation. Her literary family portrait—Ms. Thomas is the great granddaughter of Norman Thomas—offers an up-close-and-personal look at the way in which war’s destructive power can divide, but can also unite a family.

Ms. Thomas dubs her efforts “a family story,” but readers will gain much more than simply a retelling of ancestral activity. Drawing upon family papers and interviews with descendants, she relates a tale that revolves around World War I, the historic events leading up to the United States’ involvement in the conflict and how it affects the Thomas family. The author also provides an interesting backstory related to the implementation of the Selective Service system.

Norman Thomas, the oldest of six children, grew up in a culture that promoted religious thinking, education and exploration. “Self-reliance was expected in the Thomas household from the earliest age,” writes Ms. Thomas. “Freedom to roam and play, to camp and catch catfish in the creek, was encouraged, but so was a sense of responsibility.”

Norman took these expectations to heart as he graduates from Princeton and becomes a minister, following the path of his father and grandfather. In time, however, his immersion in the real world proves eye opening.

The author provides detailed background of life in New York where Norman had moved to pursue his ministry. Unfortunately, his introduction into this new world produces an internal conflict. Moving between the “. . . tables of wealthy philanthropists and helping parishioners who never had enough food, Norman bifurcated his life. Inequality alarmed him, and he wanted to work to ameliorate it. But he wanted to eat pancakes at Saranac Lake, too.”

Sprinkled throughout the book are quotes from Norman’s unpublished autobiography, which lend a great deal of personal insight into the man. His recollections “minimized conflict within his family, or else he tacitly acknowledged their disagreements but called them inconsequential.”

Norman’s pacifist tendencies emerge early and persist throughout his lifetime. While Norman Thomas’ name is largely missing from the history books, his impact on the social conscience of the country is considerable. Involved in social service work, not only through his church but also in the larger community, he fulfilled his pacifist philosophy. In fact, Martin Luther King Jr. wrote a tribute to Norman titled “The Bravest Man I Ever Met.” In this essay, he commends Norman for his efforts on behalf of civil rights. “He was for us before an other white folks were,” said King.

Norman’s involvement and promotion of pacifist groups should be noted. A member of the Fellowship of Reconciliation, a Christian organization; The American Union Against Militarism (AUAM); and the National Civil Liberties Bureau, Norman, together with a group of civil rights lawyers, founded the American Civil Liberties Union (ACLU) in 1920.

The Thomas brothers all share some traits, but in other ways are quite different. Ralph, like his father, “. . . was suspicious of excessive wealth and possessed a profound sense of personal duty;” however, each of the Thomas brothers were infused with a “sense of duty to ‘commit to something’,” as Ralph put it. Early in the book, Ms. Thomas hints at future tension among brothers with this line: “But rivalries took precedence over blood and friendship.”

At the same time that she writes of Norman’s growing disenchantment with the country’s infatuation with war, Ms. Thomas presents Ralph’s story of mounting involvement with the military. Ralph, the second son, becomes a first lieutenant in the 302nd Army Corps of Engineers. Arthur, the youngest brother who earns minimal mention in the book, joins the Air Service and is assigned to the Army School of Military Aeronautics.

Evan, the third son, “wrestled with the idea of martyrdom and looked for role models in figures like Henry David Thoreau.” His mantra became “True to my own conscience,” an expression that would lead to imprisonment, hunger strikes and near death. Although Norman and Evan share a deep “sensitivity to injustice,” they also argue strenuously and represent extremes of the principle. While they hold a “common concern for civil liberties and freedom of conscience,” they part ways in the execution of these attitudes. Evan, “almost anarchic in his principles and temperament, inclined to look inward and act accordingly. Norman’s conception of conscience was more complex and almost paradoxical.”

The theme of “conscience” runs through the entire book. Not only do the Thomas brothers suffer the consequences associated with following their individual principles, but the country’s leaders also wade through conflicted emotions as they anticipate preparing for and entering the war. The author offers considerable insight into the political climate in the country at that time—particularly President Woodrow Wilson’s tormented conscience regarding entry into the fray.

Ms. Thomas writes, “All of the Thomases worked true to carry out the dictates of their convictions, but confronted with differences between them, they had to respect the dignity and capacity of others who disagreed, without endorsing the disagreement.”

The author hopes that readers will find some of their own history in this book. Undoubtedly, they will.