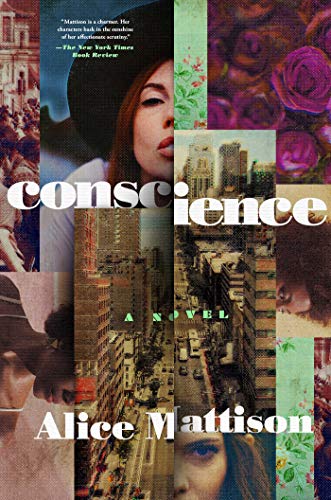 Ah, for the naivete of the sixties and seventies, when Americans were shocked that their own government would publish false statistics, that U.S. troops would regularly kill civilians as “collateral damage,” and that the man in the Oval Office would ignore mass protests.

Conscience, the new novel by the award-winning author Alice Mattison, will be a bittersweet read for many who remember the Vietnam War era.

“‘Can you agree that there is a twenty-percent chance that the war will end if we work to elect a peace candidate?’” one of the main characters, Olive Grossman, earnestly asks her activist friend, Helen Weinstein, in the spring of 1968.

That, of course, was before Martin Luther King Jr. and Robert Kennedy were assassinated. Before Watergate. Before the Iraq war and the torture at Abu Ghraib. Before Donald Trump.

But Conscience is not naive. Using two narrative strands, related by three richly complex narrators, the book explores a half century in emotional and political depth.

In the sixties-seventies strand, Olive looks back on her life in high school and college in New York City, and the early years of her marriage, when she was simultaneously enthralled and terrified by Helen’s growing anti-war radicalism. On the fringes of their friendship was a third classmate, Valerie Benevento, an aspiring writer who was more charismatic and less political than the other two.

Val “made me feel that more was possible than I had known,” Olive recalls. “For Helen, life could lead to the unexpected, but only after you’d squeezed yourself through a narrow tube of self-scrutiny and considered everything up to and including burning yourself to death.”

The second narrative strand—set in present-day New Haven, CT, where Mattison herself lives—is told in alternating sections by Olive, now an editor at a little publishing house; her husband, Joshua Griffin, sometimes known as Griff, “principal of a small, innovative high school that serves troubled kids”; and Jean Argos, director of Barker Street Social Services, a local nonprofit agency where Griff has just become board chairman.

In this current-day section, Olive has been commissioned to write a magazine essay about Val’s briefly famous novel of some three decades back, Bright Morning of Pain, “in conjunction with forthcoming new paperback and e-book editions.”

That novel is a thinly fictionalized story of Helen. And the effort to write her essay forces Olive to confront her fascination with Helen and her anger toward Val.

Not surprisingly, the sixties-era narrative is more dramatic and engrossing, even though it’s obvious what will ultimately happen to Helen. (Spoiler alert: Do not Google the name Kathy Boudin.)

Nevertheless, the more placid drama of the current story line also has its page-turning elements. Will Olive and Griff stay together? Will Jean finally take too many risks at Barker and be fired?

Mattison is sharply insightful about the dynamics between complicated people. After several decades of marriage, including a long separation, Olive muses, “Infidelity, in our lives, didn’t have to do with bodies. Griff was unfaithful because he had stopped being curious about me.” What a perfect summary of a stale marriage!

The author’s insight can also extend to lesser moments. When one of Jean’s more questionable staffers “spreads her long fingers and brings her open, arched hand down on my desk,” Jean sees it as “the gesture you might use to grab something small that was scuttling away.”

After dozens of pages, however, the ups and downs of the present-day relationships become repetitive. How many times does Jean have to (figuratively) clap her hand over her mouth and remind herself that she shouldn’t bring up the subject of Val’s book in front of Griff—who, after all, has the power to fire her? For that matter, Jean’s insistence on keeping the iffy staff member and pursuing an expansion at Barker isn’t believably explained.

Still, the most important element of this novel is the way it organically weaves the title theme—and the questions the word conscience evokes— throughout the narratives. Merging political history with good storytelling and compelling characters is one of the trademark strengths of Mattison, who, in earlier novels like The Book Borrower (1999), examined the labor movement in her native New York City.

Conscience explores the ethics of the Vietnam War, and of how far to go in protesting unjust action by governments and Big Business, of course. But it also considers the ethical questions that Jean raises at Barker, about taking risks to improve daily lives, as well as Griff’s and Helen’s ethical challenges to Olive: Are there limits to forgiving those we love?

As in the sixties, these are questions that conscientious readers of all political stripes would do well to ponder today.