Conquering the Pacific: An Unknown Mariner and the Final Great Voyage of the Age of Discovery 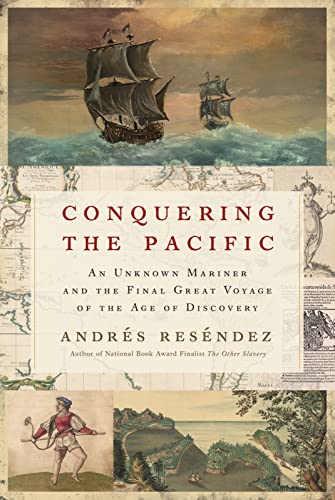 Author Andres Resendez has undertaken to tell the story of a little-known voyage across the Pacific Ocean by a small Spanish fleet, one ship of which, the smallest, was led, surprisingly, by a mulatto navigator, had an overarching impact then and has continued down to the present day. It was not, as it turns out, a voyage to discover new lands and explains why it has received so little notice by posterity.

The Golden Age of Exploration, starting in the late 15th century, is generally considered to include those voyages by Europeans that reached the far ends of the earth and where these explorers claimed new lands for their sovereigns. Virtually all resulted in the exploitation of multiple physical resources and, tragically, the various inhabitants of said lands.

Moving south and then east through the Atlantic into the Indian Ocean, these voyages were intended to develop a maritime route to the riches of Asia and the so-called Spice Islands. By virtue of a papal decision to divide the New World between Spain and Portugal, the leading exploratory nations of the time, the former decided to use the Western Hemisphere as a springboard to Asia, across the Pacific Ocean, thereby bypassing Portuguese outposts in Africa and India.

Inasmuch as knowledge of ocean currents and navigation was limited or restricted to those few possessing such skills, there was still much that was unknown to even the most renowned navigators of the time, especially where the Pacific was concerned. Consequently, it was necessary for Magellan’s voyage to circumnavigate the globe in order to return to Spain with the knowledge that this largest ocean on Earth could be crossed and also bring back the desired riches.

All other subsequent voyages also failed to find a means of returning east to the Western Hemisphere. As a result, this story is that of the discovery of the vuelta, the ocean current necessary to return to North America by way of the Northern Pacific and thereby avoid any possible unpleasantness with the Portuguese.

Also woven into the story are the discoveries of lands and people made in the course of the voyage as well as the rivalries, disputes, disagreements and conspiracies among those captains and navigators who sailed in the small four ship fleet which set sail from the west coast of Mexico in late November 1564.

Needless to say, these voyages were not only beset by the elements but also by the possible lack of fresh water and provisions to be found in the way of replenishment. Compounding these difficulties was the fact that the smallest ship was mysteriously separated from the others, resulting in this story and consequent rivalry and disagreement as to the success of this ship in locating the vuelta.

Certainly, the mixed-race origin of its navigator was a factor in the eventual investigation of the circumstances surrounding the initial separation of the vessel from the fleet, the actions he took subsequently and to whom should go the credit. This navigator’s ultimate fate is also rather surprising. It all makes for an interesting mystery story well told by the author.

Creditably, Resendez has provided an overall history of the Age of Exploration prior to this voyage as well as information on the navigational technology of the day. Explaining this can obviously be somewhat technical and involved so one should be forewarned. Fortunately, there are some maps that help to provide context to some of the navigational information provided.

The other maps, portraits and illustrations are reproduced mostly from the period in question and offer insight into what information was available to those of the time in their quest to learn about their world and digest what was now being discovered by explorers during the course of their myriad voyages.

Impressive as well is the research done by the author, although much of it is from more contemporary secondary sources and not so much from original documents in Spanish, Portuguese, or other archives. Also helpful is a short note referencing dates and measurements which compare those of modern day and the 16th century.

The discovery of the vuelta influenced all subsequent voyages and has done so right down to the present. This story deserves a wider audience even if it didn’t result in a momentous discovery of lands or riches along the lines of a Columbus, Cortez, or Magellan.