Conquering the Ocean: The Roman Invasion of Britain (ANCIENT WARFARE AND CIVILIZATION) 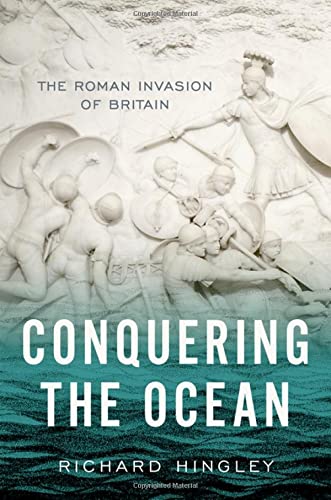 “a fascinating and well-illustrated look at this neglected aspect of Roman and ancient war history, describing the long-term successes and failures of a succession of emperors to conquer this land at the northern limits of the Roman empire.”

The Romans expended tremendous time and resources extending their empire into the northern reaches of the British Isles across several centuries. The conquest and Romanization of Britain was a near obsession for a series of emperors beginning with Julius Caesar. In this new history of Roman military and diplomatic actions at this frontier of the empire, archeologist Richard Hingley takes a fresh look at this remote region of the Roman empire, incorporating both historical sources and archeological finds to offer new insights for not only the Roman experience, but the varied reactions of the native Britons to their Roman invaders and conquerors.

Julius Caesar was certainly intrigued by the land across the English Channel, an unknown sea to the Romans, and using seamanship and experience gained in sailing the Mediterranean, he sent the first expeditions to this unknown land in 55 BCE. Other expeditions continued to expand the Roman presence, with the first permanent Roman settlements in southeastern Britain soon to follow.

The reaction of the native tribes to the Roman incursion was mixed, like most of the territory absorbed by the empire, with some tribes forming alliances and acting as local proxies by paying tribute and enjoying a trade relationship, while others resisted the Roman encroachment, achieving some short-term success in defeating the initial advances by the Roman legions. There were numerous revolts against the Roman conquest and occupation, the most notable being the revolt led by the matriarchal leader Boudica in 60 CE, defeating several Roman legions and leaving a wake of destruction of Roman settlements and forts before being overwhelmed by multiple legions and auxiliaries.

The author also provides a great deal of analysis of the Iron Age culture of the British tribes, using numerous recent archeological finds to offer a more in-depth look at the native interactions and civilizations during the time of the Roman conquest. Archeological evidence is also used to uncover more about the Roman military outposts and civilian settlements, offering some revealing information about the presence of women and children at what were originally thought to be exclusively military fortifications, indicating they may have served a dual purpose of aiding settlement of the surrounding countryside by Roman citizens and allies.

As the Romans then pushed to the northern reaches of the British Isles, they reached the true limits of their ability to control or intimidate the local populace and eventually the Roman Emperor Hadrian decided to build a wall to separate their territory from the “barbarians” of the northern reaches. Even the traditional understanding of this wall has evolved through the use of archeology, with the author presenting a detailed description of the fortified garrisons built along the wall’s length to provide additional protection to this farthest limit of Roman power.

The author concludes with an overview of how the modern interpretation, particularly among modern Britons, of the Roman conquest and occupation of England has evolved, particularly the last few hundred years. The myth making around Boudica has especially changed as she became a symbol of both matriarchy empowerment and resistance to tyranny.

This is a fascinating and well-illustrated look at this neglected aspect of Roman and ancient war history, describing the long-term successes and failures of a succession of emperors to conquer this land at the northern limits of the Roman empire.