Connections in Death: An Eve Dallas Novel (In Death, Book 48) 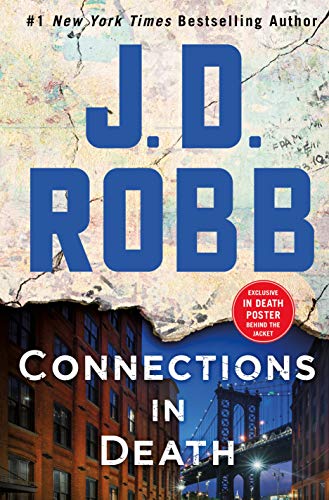 “This 48th entry in the In Death series continues raising the bar in the mystery genre.”

Lyle Pickering has served his prison time. A former addict, he’s gotten clean, learned a trade, and turned his life around. Now, he’s sharing an apartment with his sister, and making amends for his previous affiliation with the Bangers, an infamous New York gang. A few hours after Pick tells his sister he’s going to see their grandmother, Rochelle Pickering returns home to find her brother dead, apparently of a drug overdose, drug paraphernalia beside him.

Rochelle knows Pick didn’t kill himself, and the forensics report as well as a witness seeing people enter and leave the apartment corroborate her belief. Now it’s up to Eve Dallas to find who killed Lyle Pickering and why, and give him justice.

Eve is certain the motive and the killers have something to do with the Bangers. Their leader, Marcus Jones, aka “Slice,” considered Pick his best friend, had offered to make him his lieutenant when he was released from prison, and didn’t retaliate when Pick refused and abandoned him and the gang.

When she discovers Pick had turned Confidential Informant and was working with one of her officers gathering evidence against the Bangers, she’s certain of it.

Would Slice go back on his word? Or is it something more?

When other bodies turn up, Eve knows she’s headed in the right direction.

“At the center, Lyle Pickering, recovering addict, a man driving himself to a fresh start Then, there’s Dinnie Duff, an addict, who sold her body and likely any remaining portion of her heart and soul for the next fix or a place to flop, complicit in the murder of Lyle Pickering . . . and Marcus ‘Slice’ Jones, a bad dude, but a man with brains, maybe not behind the murders but a bad dude nonetheless.”

Add one shady disbarred lawyer partnering with Slice, billions of dollars in an off-shore account, two related murders, jealousy, and dissention in the Bangers’ ranks with intent to start a gang war, and it’s a case Dallas is determined to solve before the explosion occurs, with closure for Pick’s family, justice for the victims, and a deserved punishment for their killers.

There may be a few too many abbreviations and acronyms in this novel that could give the uninitiated reader pause as she tries to decipher them, but not to worry—with a bit of thought, she’ll soon  be breezing through those alphabetic short-cuts like a veteran. The facilities and procedures of a future police department are a wonder and a delight. It’s also interesting to note the lessening of dress code and hair style, where emerald green dreads, sunset-colored trousers, and fluorescent pink tanks are the norm.

Though the novel begins at a cocktail party where Eve feels like the odd woman, as uncomfortable with the glamour and glitz—as well as the “dressing up”—as Roarke is at home with it, this quickly sets up the rest of the story by introducing nearly every character involved.

This story is more intense in its pursuit of the criminal element than others in the series. Underscoring this, a good deal of the ironic banter between Dallas and partner Peabody is missing as are the usual verbal duels between Eve and butler Summerset that most readers have come to expect. In spite of this absence, the relationship between Roark and Dallas is as obvious, intense, and passionate as ever, and their personal badinage, in which this love is displayed, is definitely present.

The scene where Roark shows Dallas through the newly renovated rehabilitation center for abused and abandoned children reveals both his love for her and his determination to prevent those youngsters from having to grow up as both he and his beloved wife did, another theme running through the stories.

This 48th entry in the In Death series continues raising the bar in the mystery genre as Eve Dallas and husband Roarke relentlessly seek out justice for the victims of violent crimes.

One can only wonder and anticipate what the landmark 50th novel will be like.