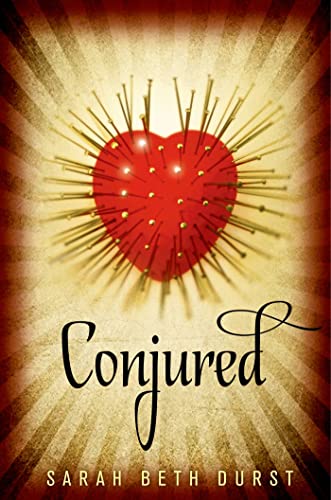 “Ms. Durst weaves such a convincing spell that we might as well be trapped . . . or lost in Eve’s gray swirl of forgetfulness with her.”

Eve, kept under constant guard by federal agents, is moving into a new house with a new face and a new name. She’s in a witness protection program, hidden away until a dangerous criminal is captured and sentenced using her testimony. The agents tell her she escaped a serial killer. But something is still hunting her with his magic.

There’s just one problem—a very big problem. Eve has no memories of her past, and the agency is growing impatient with her forgetfulness. Her watchers push her hard, trying to trigger those forgotten memories. They arrange a day job for her at the local library where she shelves books under watch of the vigilant four-eyed librarian.

They introduce Eve to three other teens in witness protection who are ordered to befriend her and challenge her with magic. Aidan can disappear. Topher generates electricity with his hands. And Victoria turns into a snake.

Even though Eve doesn’t remember her past, she discovers she can do some magic of her own: She walks through walls, changes her brown eyes to green, and frees the painted birds on her bedroom wallpaper. So when her new friends seemingly try to kill her during a game of pool, she sends the shattered shards of a broken mirror at them to protect herself.

But Eve has another issue to contend with. Every time she uses magic, she falls unconscious and has terrifying visions. She feels someone sewing buttons into her skin. She finds herself in a tattered carnival tent where people are trapped in small, jewel-encrusted boxes dangling from ribbons, “like charms on a necklace.” Desperate eyes plead for freedom from the boxes, and sometimes blood drips from them as well.

Eve realizes that she, too, spent time trapped inside a box as the magical caravan swayed and bumped across realities to the next carnival site. “She’s broken,” a woman says when she looks inside Eve’s box to prepare her for the show. “She’s perfect,” answers a man. The voices are familiar.

When Eve wakes up from her visions (Dream? Memories?), it can be hours, days, or weeks later. Sometimes she finds herself in a hospital bed with an I.V. in her arm or at her own kitchen table sipping juice. But she can never remember what happened during her lost time. Not one thing.

Zach, a parttime library employee is the first good thing that happens to Eve. For one thing, he never lies to her like the others do—her keepers and their boss. A shared kiss sends Eve and Zach floating in air. She learns that when they kiss— when Zach inhales her breath—he receives her magic. Nothing in her visions or dreams has prepared her for this.

Eve lives in unremitting dread of her visions, her magic, and especially her memory lapses. Her constant fear and visions create an unsettling, claustrophobic atmosphere for the reader, who often feels confused, as helpless and afraid as Eve. Ms. Durst weaves such a convincing spell that we might as well be trapped inside a red box or lost in Eve’s gray swirl of forgetfulness with her.

It’s hard to put down this intriguing and darkly spooky story that calls out to be quickly consumed in search of answers. Who is Eve and where does she come from? What can she do and what does she know? And most of all, can she find the killer before he finds her? Conjured spirals to a shocking and totally unexpected conclusion.