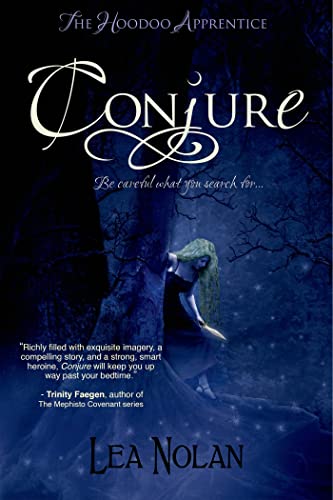 “Conjure is a sweet, adventure-packed romp for young teen readers.”

Emma Guthrie is having a typical summer: lazing about her South Carolina Lowcountry home, beach crawling, and spending time with her twin brother and her secret crush.

The discovery of a bottle containing a message about pirate treasure changes everything.

Soon Emma and her crush are in a race against time to learn enough hoodoo to break a Gullah curse that will eventually kill her brother and steal the soul of her beloved. Mystery and magic abound as Emma discovers secret talents, ancient magic—and maybe summer love.

This sounds like an episode of Nancy Drew, and it is a nice fit into the general mold of Intrepid Girl Saves the Day. While some books with this conceit can be cloying, Lea Nolan carries it off with aplomb. Her characters are engaging and as realistic as one ever gets in a non-angsty book about teens. Emma is spunky; her tenacity in learning magic and dealing with the various forces conspiring to keep her from saving her twin is admirable and believable. Her crush on Cooper Beaumont is sweet, funny, and engaging. Ms. Nolan does a good job in fleshing out this most important character.

Beaumont and Emma’s twin, Jack, are not as fully developed, unfortunately, and throughout much of the book are fairly flat. Yet both have their moments of brightness, enough to make the overall read pleasurable.

The romantic aspect is about what one should expect from a firmly YA novel: a few chaste kisses, hopes raised and lost and raised again, and an ultimately happy ending. Given the ages of the main characters, 14 and 15, the sexuality level is appropriately low. It is sweet, though, and the reader who remembers being 14 and the overwhelming way a crush can make or break a day will smile.

This is no adult novel trying to make a buck with kids with barely veiled sex; in fact, Conjure could just as easily work for a middle grade readership, for adventures abound despite the romantic undertones. There are pirates, lost treasure, curses, and ancient curses, chases, narrow escapes, and secret letters galore.

Though Ms. Nolan’s first-person, present tense presentation might prove jarring to an adult audience, it is fairly common in YA and middle grade novels and should fly with it’s target audience.

Conjure is a sweet, adventure-packed romp for young teen readers.