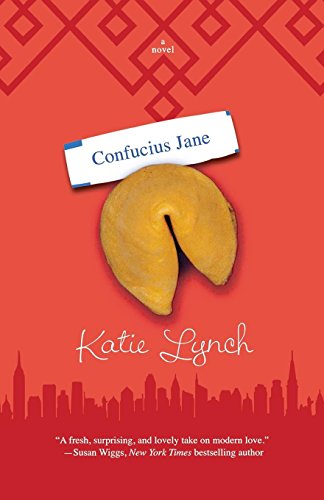 “the story is charming and readers who enjoy romance ought to give this a try, even if they aren’t huge fans of the GBLTQ scene—this is a great toe-dip into those waters without the oft-associated kink.”

Jane is an aspiring poet who feels crushing failure with every fortune she writes in her uncle’s fortune cookie factory. Jane’s thesis advisor has recently died, leaving Jane’s project in the lurch, and the new advisor doesn’t understand Jane’s art. Her ego bruised, Jane retreats into her close-knit family in Chinatown to work and live with her aunt and uncle until she figures out what to do next.

Jane’s relationship with her precocious cousin Min, only eleven, is delightful. The two room together, and Min is Jane’s cheerleader. Min encourages Jane to believe in herself and take chances, such as introducing herself to the beautiful Sutton St. James at the local noodle shop, Noodle Treasure, after spending quite some time spying on The Goddess in Glasses.

Sutton St. James is finishing medical studies and has no time for a relationship, but she’s charmed by Jane’s friendliness, and they develop a strong physical attraction. There are quite a few steamy intimate scenes. Lynch is the real name of author Nell Stark who has won awards for lesbian romances.

Sutton and Jane are from different backgrounds and have different ambitions, fitting the romance novel trope of opposites attracting. Relationship issues are explored, such as trust, independence, commitments, communication, and insecurities. The dialogue is believable and despite the same ole same in the romance vein (misunderstandings, sexual tension, etc.) the fact that this is a romance between two lesbians in mainstream fiction is a refreshing change, and the cultural shift will be a unique selling point to readers, too.

Sutton St. James is a driven woman torn between her parents. Sutton’s mother’s debilitating multiple sclerosis would lead her into stem cell research and away from a surgical residency and her father’s dream, and neither parent would approve of her wasting time in a relationship, much less of being a lesbian. Jane has a close-knit family aware of her sexuality and who have embraced her. The two tales of coming out will resonate with young GLBTQ readers.

The story switches between Sutton and Jane’s perspectives. Unfortunately, Sutton’s story is often a bit boring, but such is her life—perhaps that’s what the author intended. Jane is much more interesting to follow; she is also likeable and relatable with her insecurities, fears, hopes, and dreams. Readers will wish they could have had more interaction with cousin Min and Sue, the apothecary. Overall, the story is charming and readers who enjoy romance ought to give this a try, even if they aren’t huge fans of the GBLTQ scene—this is a great toe-dip into those waters without the oft-associated kink.