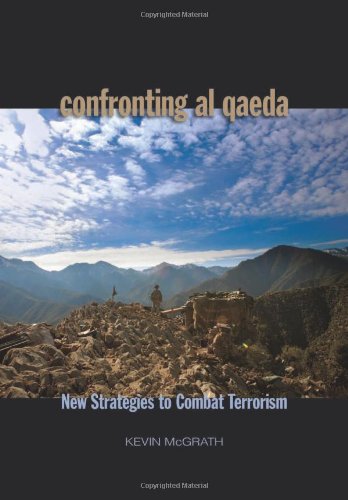 “Dr. McGrath deploys a deft hand in helping us decipher the complexity of this struggle. He systematically lays out, region by region, who the players are; what their goals are; and more importantly, what the U.S. can do to counteract this volatile mix.”

Kevin McGrath’s Confronting Al Qaeda is published at a fortuitous time. With the 2011 elimination of Osama Bin Laden, the general public continues to seek guidance on the best ways to confront Al Qaeda and how to better manage our relationship with that entity in order to protect the well-being and safety of the civilized world from extremists.

As the public at large is beginning to learn, understanding the complexities of our struggle with Al Qaeda involves methods of comprehension beyond the simple binary contexts of good vs. evil. Also, what is required for this complicated subject matter is the ability to probe further than the rudiments of counterinsurgency theory and practice as exemplified by the efforts of General Petraeus in both Iraq and Afghanistan.

The scenario that is involved is in fact a political struggle in addition to a military struggle of applied asymmetrical force. And among those we confront, there is a complex cast of players and regional actors.

To provide a sampling of the actors: In one moment in Afghanistan you could be dealing with disparate tribes run by warlords who exist as part of an internecine struggle that goes back centuries. Or you could be dealing with the introduction of foreign fighters representing Al Qaeda or one of its franchises who are driven by the strict brand of Islam represented by Wahhabbism, the puritanical branch of Islam most prominently practiced in Saudi Arabia. All of this is further complicated by rogue factions within the Pakistani military and/or government who in their zeal to thwart the ambitions of India, have been protecting and coddling both the Taliban and Al Qaeda for over 20 years.

Finally, further fuel is added to the fire of this complex mix by insurrections resulting from the “Arab Spring,” where in countries such as Yemen, Al Qaeda is seeking to fortify their franchise in that country by waiting for the dust to settle in the Arab unrest in that region. They, like the Muslim Brotherhood in Egypt, are the most organized faction in that environment, and they can afford to bide their time until a clear direction in the struggle for democracy in that region emerges—then they can organize their potentially deadly response.

So how does Dr. McGrath’s work add to our understanding of the confrontation against Al Qaeda? Author McGrath deploys a deft hand in helping us decipher the complexity of this struggle. He systematically lays out, region by region, who the players are; what their goals are; and more importantly, what the U.S. can do to counteract this volatile mix.

We have already come to some understanding of this in Pakistan, where the following factions are at play: the weak Central government; the Taliban Quetta Shura, representing the more militant Taliban factions; the Pakistani military; rogue members of the Pakistani military and their Secret Service Counterparts (ISI); and that faction of the Taliban who are merely guns for hire because, relatively speaking, the pay is so good.

How then should the U.S. combat this series of factions in Pakistan and Afghanistan in order to dampen the fires in Afghanistan? Dr. McGrath’s first approach is to note that there is a political struggle underway, existing below the surface, that may defy a strictly military solution. What is meant by that? At this point in time, in mid-2011, it is difficult to tell whether the “surge” in Afghanistan is succeeding. There is some truth to the fact that the Afghani military and police forces have assumed greater credibility, and that the writ of the Afghani government is extending beyond just Kabul. But in the long run a political solution must be fashioned that supersedes the concept of “winning hearts and minds.”

The form of this political solution, as Dr. McGrath suggests, is, of course, complicated. (Would you expect anything else in this region?) The key to success in this process is to remove the oxygen from Al Qaeda by undercutting its political support.

Though there may not be any such thing as “moderates” within the context of this struggle, what can be done—and in fact is being done—is to work with those factions in Afghanistan, Pakistan, and Yemen who, though still steeped in their ideology, are tired of the struggle. Because of this exhaustion, they may be willing to compromise, or at a minimum be placated, if a series of incentives—economic, political, and cultural—can be designed to encourage their participation in the political process.

What has to be done as a result of this new political branding is provide inducements to the warring factions to gain their acquiescence to some of the strides that have been made in terms of uplifting the status and treatment of women, and to alleviate the overtones of graft, corruption, and authoritarianism that are sadly still synonymous with governmental rule in some parts of the Arab and Muslim world. This is a bold undertaking. But we are fortunate in having had some of the groundwork laid in opening up these societies as a result of the effects—still emerging—of the revolutionary Arab Spring of 2011.