Conflict and Costume: The Herero Tribe of Namibia 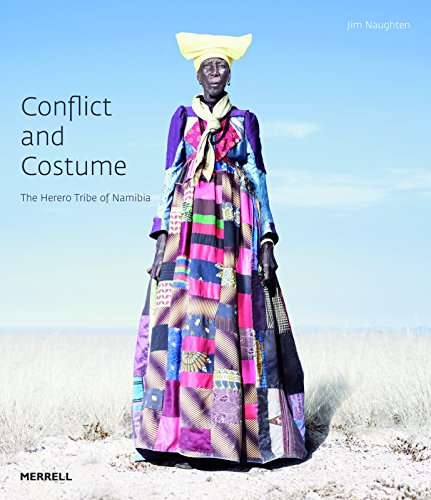 “. . . an extremely interesting and enlightening volume that suggests that fashion is indeed everywhere we look.”

Conflict and Costume is an enormously interesting view of fashion seen by observers who are not connected to the fashion business. In this book, a highly impartial pair of authors conduct an intelligent study of a manner of dressing dating back to the late 19th century.

The arresting photographs in Conflict and Costume depict the Herero Tribe of Namibia in all of their glory set against the arid Namibian desert landscape. The women, of course, are the more diverse and colorful as they have a “code” that speaks to the age of the wearer, her fertility status, and the function where the outfit will be worn—all of which include a headdress of some sort.

The men take their influences from the Germans who occupied this area during the late 19th century and into the early 20th century. The attire reflects more of a uniform than native attire. Again, there is an unspoken “code” that explains the reason for all of the outfits as well as the destination of the wearer.

Amid this barren landscape and despite the lack of modern day conveniences, these women’s clothes are all made by the wearer, which speaks to another aspect of fashion rarely explored today. Imagine tailoring a puff-sleeved jacket or an entire patchwork ensemble by hand. If one is to extrapolate this act of creating, then one might draw the parallel to haute couture . . . possibly. It would be difficult to say these women truly possess the same skills as the “petit mains” working in haute couture, but it certainly would not be a stretch of the imagination.

One might also view Conflict and Costume as part sociological, part historical, and largely cultural—all centering around the wardrobe of the Herero tribe of Namibia. This is a book for fashion adventurers who are always hungry for more knowledge despite usually accepting the world of fashion as presented to us through a pinhole lens.

Conflict and Costume is an extremely interesting and enlightening volume that suggests that fashion is indeed everywhere we look.