The Confidence Trap: A History of Democracy in Crisis from World War I to the Present 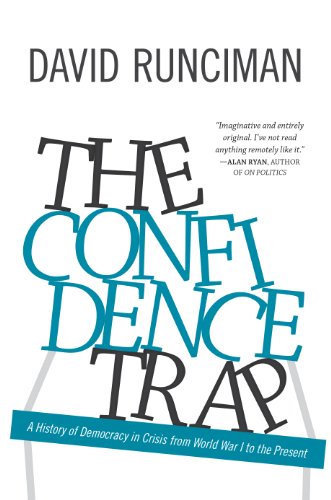 Democracy can be measured by its successes, but these successes can trap democracies. Either by fatalism or complacency, democracy can become seduced by its own successes and not notice the next crisis on the horizon.

David Runciman, a professor in politics at the University of Cambridge and a contributor to the London Review of Books, has written a brilliant analysis of democracies in crisis and the traps inspired by the confidence of success. The book brings together clear-headed political analysis with a natural sense of historical storytelling. Beginning with Alexis de Toqueville and ending with Francis Fukayama, Runciman investigates the crises that defined the very bloody 20th century.

Runciman's book can be compared to Eric Alterman's political history When Presidents Lie: A History of Official Deception and Its Consequences. Both use specific case studies as jumping off points and both books move with a cumulative intensity, each new case study building upon the lessons learned (or not) from previous cases.

In the case study entitled, “1933: Fear Itself,” he begins not with the inevitable appearance of Nazis, but the World Economic Conference held at the London Geological Museum. The thirties saw the decline of democracies amidst a global economic cataclysm.

He contrasts how Germany and the United States reacted to the crisis. Unlike Germany (and the Soviet Union), a regime ushered in on the assumption that capitalism would collapse, the United States adopted dictatorial measures as a temporary measure. Once the crisis passed, the United States transitioned back to a more market-friendly economy. Germany became a society engineered around the concept of total war and collapsed, because it lacked the improvisational genius of the democracies.

The Confidence Trap is a magisterial, if frustrating, read. The counterintuitive nature of Runciman's arguments leads to the frustration. But a book that forces arguments and demands wrestling with ideas should be praised.

Runciman does have a penchant to write what sound like Taoist riddles, “The spread and growth of democracy has generated the possibility of collective failure. Yet the spread and growth of democracy remains our best bet against the possibility of collective failure, because democracies are always trying something new. The advantages of democracy are inseparable without the risks. There is no way to access the former without incurring the latter. The long-term strength of democracy comes from its short-term restlessness; it is also at risk of being undermined by its short-term restlessness.”

Despite sounding like a circular argument, it is in fact the opposite. This is a breath of fresh air from the narrow visions of ideologues. (Another satisfying aspect was his dual take-down of both the Tea Party and the Occupy movement.) Those fed up with ideologues and the empty promises of universalist utopian dreams should read this book.

It won't be utopian dreams but banal realities that save democracies. Runciman illustrates this when he investigates the Cuban Missile Crisis. (Alterman offers a different perspective, exploring how President Kennedy's negotiations with the Soviets were exploited by the Right to make him look “weak on Communism.”)

The apocalyptic stakes were given a grounded reality by President Kennedy, mainly by his fears about reelection. Runciman concedes this at first blush appears banal and even grotesque. But the distraction of the upcoming elections created an atmosphere where President Kennedy could improvise and negotiate through the crisis. Other leaders, without the distractions of democracy, would have been paralyzed by the crisis.

Runciman gives a peculiar assertion of democracy's virtues thanks in part to his reading of de Toqueville. Democracy is banal and shallow, but it is also energetic and exciting. Although he is the first to concede the complexities and discontents of democracy make it ripe for another crisis.

The constant crises (real and fabricated) in both the 24-hour news cycle and the election cycle make citizens unaware of when a genuine crisis may appear. But unless that crisis is cataclysmic enough to undermine democracy itself, democracy will find a way to muddle through.

No grand visions, no messianic saviors (race-based or class-based), only what will weather the administration through the upcoming elections. Adaptability is key; stasis is death.