Confessions of a Rogue Nuclear Regulator 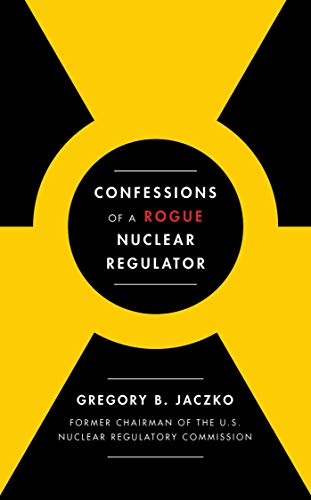 “Confessions of a Rogue Nuclear Regulator is short, easy to read, and quickly gets to the point, while avoiding many of the questions any astute reader might raise. However, given that Jaczko’s points are very carefully worded, those readers will be left with the impression Jaczko did not say all he could have.”

“I know that nuclear power is a failed technology. This is the story of how I came to this belief.”
—Gregory B. Jaczko

Confessions of a Rogue Nuclear Regulator is a carefully crafted memoir by the chairman of the Nuclear Regulatory Commission (NRC) who served in office during the Fukushima nuclear power plant disaster in 2011.

Author and Chairman Gregory Jaczko never intended to serve as a nuclear regulator. Jaczko, who holds a PhD in nuclear physics, began his post-doctoral career in Washington with a fellowship from the American Association for the Advancement of Science (AAAS). He first worked for Congressman Edward Markey and then for Senator Harry Reid.

Senator Reid appointed Jaczko to a temporary term as commissioner (member of) of the NRC when a vacancy opened. At the time of his appointment, Jaczko considered himself a moderate who was “Intrigued by the technology but cautious of the potential harm.” His appointment had to go through a nomination process that incurred delays. As Jaczko explains, “The blunt message I would get over the next two years of senate stalling was that honesty and integrity mean nothing if you are perceived to be critical of nuclear power.”

Senator Reid succeeded in getting Jaczko through the process by appealing to President Bush, who approved Jaczko without Congress’ concurrence as is permitted when Congress goes into “recess,” i.e. when Congress takes a vacation. The recess appointment allowed Jaczko to serve as a commissioner before formal confirmation was completed under president Obama. Jaczko was next offered the Chairmanship, but first had to meet with President Obama’s chief of staff, Rahm Emmanuel. Emmanuel told Jaczko, “You are a fucking asshole and nobody likes you . . . you better not fuck this up.”

The NRC has a staff of 4000, a budget of $1B, and sets regulatory policy through formal votes, but only the chairman has the authority to carry out policy. As chairman, Jaczko set the NRC’s agenda and budget, and became the spokesperson of the agency, reporting to Congress, the media, and the public. Jaczko demurs (falsely in this reviewer’s opinion) that he held any real power, “The worst I could do was expose embarrassing problems.”

At the start of the Chernobyl disaster, the U.S.S.R. first tried to cover it up, only admitting the disaster was a disaster after it could no longer hide the problem. And because of hiding the facts, “first responders were exposed to significant radiation.” Five million people were living in the path of the radiation plume; Jaczko adds, “what’s more, the accident read like a handbook of everything not to do when operating a nuclear power plant.” Chernobyl as of today has not been fully cleaned (33 years and counting), the cleanup (such that did occur) cost an estimated inflation adjusted price of $68B U.S., and has an “exclusion zone” of over 19 miles in diameter. The exclusion zone, believe it or not, has become an eco-disaster tourism site.

Note this review is being typed right days another nuclear accident in Russia that the Russian government is denying.

Jaczko notes a few smaller accidents and almost accidents, noting that after each was a sincere belief that the last accident would be the last accident ever. He points out the most significant factor besides equipment failure that compounded each disaster was miscommunication and misinterpretation by government and industry officials.

Of the near disasters, the Davis-Besse Nuclear Power Station near Toledo, Ohio, had steel alloy parts that were corroding, cracking, and leaking; the extensive damage was only officially detected and reported when the plant was shut down for inspection in 2002. Though fines and criminal charges were brought against the owners, there was minimal consequence.

Another near disaster was in consequence of an earthquake in August 2011 that affected the North Anna Nuclear generating Station in Virginia, about 100 miles from Washington, DC. The earthquake exceeded what the plant was designed for, and the plant was shut down for safety checks—no radiation leaked.

Also, in 2011, the Fort Calhoun Station and Cooper Nuclear Station, situated along the Missouri river near Omaha, Nebraska, were almost flooded when the river rose, and photos of Fort Calhoun surrounded by water can be found on the Internet. Luckily for Omaha other cities downstream, the plant had been already shut down for flood protection upgrades. During the flood however, a fork lift punctured a safety berm and water washed into the plant’s wells. Fort Calhoun Station was not restarted until 2014. Fort Calhoun encountered threats of flooding again in 2019 and are now headed toward decommissioning, a process that won’t be completed until 2025. Cooper Nuclear Station has had its license renewed and will be operating at least until 2029.

On to the heart of the memoir.

Jaczko was Chairman of the NRC and acting as U.S. liaison to the Japanese government during the Fukushima disaster in March of 2011. The Fukushima accident was caused by a tsunami initiated by an earthquake. The combination of earthquake followed by tsunami provided a one-two knockout punch to the power plant.

Jaczko claims what made handling the disaster more disastrous were the missteps and miscommunication between Japan and the U.S. after the event. One of the key factors in Japan’s mismanagement was the decisions made by young and inexperienced members of Japan’s government who were  in charge of nuclear policy and disaster relief. Jaczko believes that Fukushima’s initial problems were in safety design, caused the coziness between government regulators and utilities in designing Fukushima’s safety backups.

The Fukushima disaster was officially declared over in 2012 when the temperature inside the reactor fell below the boiling point of water; however, all is not back to normal. Jaczko states, “In much of the area surrounding the plant, it is simply not feasible—economically or technically —to remove all the soil, plants, and buildings that may be contaminated . . . so while the accident may be over, cleanup may take close to forever.” As of 2019 radioactive seawater from Fukushima was detected at the far islands of Alaska.

Could what happened at Fukushima happen in the U.S.? Jaczko begins to answer that question with a chapter on worst case scenarios. He lists the various forms of natural disasters that could impact U.S. nuclear power plants including mudslide, tsunami, earthquake, hurricane, tornado, and flood.

He then addresses decisions that allow building nuclear power plants near fault lines and population centers. Of the possible worst-case scenarios, the greatest concern for nuclear power plant operation is fire destroying the cables that provide information as to what is going on inside the plant.

Jaczko is vague on detail, at best offering, “. . . we had to believe that safety standards are determined by science, but societal norms, traditions, customs, and politics play a role in establishing those standards.” And as to the question, “How safe is safe?” Jaczko can only give a weak response, “the answer is complicated.”

Jaczko details evolving safety regulation to explain why safety rules are difficult and expensive to implement, and why safety regulation is fought by industry. NRC policy governing nuclear power plants prior to the Three Mile Island was chaotic and costly. After Three Mile Island, strict regulations were replaced by safety designs that followed probability-based models. The models were clearer to follow, however the assumptions behind the models were a way for industry to argue safety regulations were still burdensome. As a consequence, safety rules were made voluntary from 2004 to 2010.

Jaczko’s quest for reform post-Fukushima became an internal political squabble between Jaczko as NRC chairman and his commissioners. The commissioners’ intent was to water down the safety recommendations made by the Fukushima task force. Jaczko as chairman, successfully outmaneuvered his staff to keep the recommendations in the final report, but despite this, real change remained stalled by industry. To Jaczko’s concern and disappointment, “the industry’s stamina would outlast the energy of reformers inside the agency.”

Surprisingly, the NRC did not slow its efforts post- Fukushima toward licensing new plants. Jaczko explains how licensing became even less regulated over time. What was initially a process to build first, license second, became license first, build second. Having a license first policy removed from the public any ability to challenge plant once it was in operation. As well, there was an unspoken rule to always approve licenses, “. . . the agency had no history of disapproving licenses.”

As chairman of the NRC, Jaczko certainly had his concerns, and he desired increased safety as condition for license approval; however, toward this end, he did not receive support from his commissioners. The only thing left for Jaczko to do was to oppose licenses for new plants that did not include post-Fukushima reforms recommended by Fukushima report. And so he did deny licenses, with the statement, “There are significant safety enhancements that have already been recommended as a result of learning the lessons from Fukushima, and there’s still more work ahead of us. Knowing this, I cannot support issuing a license as if Fukushima never happened.”

For enforcing regulatory reform and denying licenses, the NRC commissioners revolted against their chairman, first by writing a letter to the President’s Chief of Staff (which did nothing), then by pressing the Republican led Congress hold hearings on Jaczko’s fitness to serve, which did little more than damage the Jaczko’s reputation.

The last chapter in Confessions of a Rogue Nuclear Regulator details Jaczko’s departure from chairmanship of the NRC. Jaczko was not so much forced out as asked to resign early. The intent was for the president to appoint the next NRC chairman before his own term ended, in order to prevent the president’s chairman designee from being blocked by any senator who chose to disagree. Jaczko concludes Confessions of a Rogue Nuclear Regulator by offering suggestions on how to keep the moribund nuclear power industry on life-support for the foreseeable future.

Confessions of a Rogue Nuclear Regulator has endnotes and an appendix that provides information on the science of radiation contamination.

Confessions of a Rogue Nuclear Regulator is short, easy to read, and quickly gets to the point, while avoiding many of the questions any astute reader might raise. However, given that Jaczko’s points are very carefully worded, those readers will be left with the impression Jaczko did not say all he could have.