Confessions of a Microfinance Heretic: How Microlending Lost Its Way and Betrayed the Poor 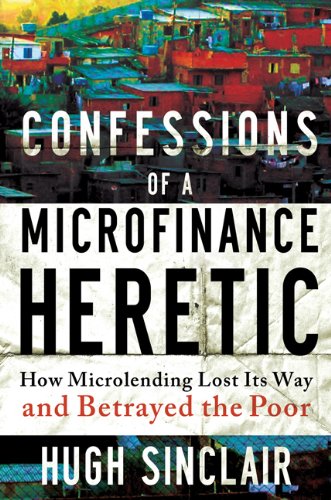 “. . . channeling Michael Lewis sets a pretty high bar, and the attempt makes Confessions of a Microfinance Heretic more fun to read than most financial books.”

Hugh Sinclair is a brave and persistent guy.

For nearly a decade, he devoted his career to what he, like many socially concerned activists, thought was a proven way to help people pull themselves out of poverty: microfinance, lending small amounts to the poorest of the poor.

The theory is that recipients will use the loan proceeds to buy a goat, a sewing machine, fabric, beads, or other rudiments necessary to start or expand small, home-based businesses. With this kickstart, their entrepreneurial zeal and hard work will supposedly propel the recipients into the middle class of their impoverished society.

But too often, Mr. Sinclair discovered, these beloved microlending organizations were ripping off their impoverished clients and misleading the well-meaning investors, becoming in the process just another profitable investment scheme.

Using his skills as a banker and economist, author Sinclair dug through obscure financial statements and confronted everyone and everything from murderous thugs in Nigeria to powerful mutual funds in the U.S.

Among the worst abuses, as detailed in his new book Confessions of a Microfinance Heretic, are interest rates of over 100%—levels that would make a loan shark faint with envy—and “forced savings,” which essentially requires those poor borrowers to deposit part of their loans as collateral—earning much, much lower interest. In the most extreme cases, collection agents use kidnapping and other threats to demand repayment.

Meanwhile, Mr. Sinclair writes, “Loans are almost invariably not spent on the productive sewing machine or goat, but on a TV, repaying another loan to a very similar bank, paying other bills, or generally consumed.”

The microfunds get away with these abuses, according to Mr. Sinclair, because there is very little oversight on the part of either financial regulators or the investors who provide the financing to the microlenders.

“These funds are the masters of spin,” he warns. “If investors in these funds are sufficiently convinced by a glossy brochure with some pictures of poor people sitting at sewing machines to hand over their money without further analysis, I’m afraid I must say, ‘more fool them.’”

Advocates of socially responsible investing will not like this message, of course. And why should they believe this unknown author, when the Nobel Committee itself bestowed its Peace Prize for 2006 on the most famous pioneers of microlending: Mohammad Yunus and his Bangladesh-based Grameen Bank?

But Mr. Sinclair knows his stuff. The book is based on his own experience as an economist and investment banker, investigating and—if he was lucky—straightening out microlending entities from Mexico to Mozambique to Mongolia. Mainly, the author concentrates on a particularly corrupt fund in Nigeria: LAPO, or the Lift Above Poverty Organization.

Mr. Sinclair contributed information to a New York Times expose of microlending published in April 2010. Other troubling stories have also emerged, including an August 2009 article in the Wall Street Journal and a controversial Danish documentary in 2010 charging that Yunus, the Nobel laureate, had diverted nearly $100 million of money intended for poor microborrowers to another company he owns. Ultimately, though not as a direct consequence, the Bangladesh government fired Yunus from Grameen Bank.

Mr. Sinclair’s other strong point is his jaunty writing style. He generally manages to explain these funds’ complex strictures and shenanigans in language that is clear to the lay reader.

A bit too often, however, Mr. Sinclair fancies himself the next Michael Lewis. That works pretty well when he is mocking his own actions and decisions, but not as well when he’s analyzing why well intentioned investors don’t question the sky-high returns. Altogether the author is too self-consciously arch. Still, channeling Michael Lewis sets a pretty high bar, and the attempt makes Confessions of a Microfinance Heretic more fun to read than most financial books.

The biggest problem is that Microfinance Heretic is padded and repetitive. Twice within six pages he repeats the adage about teaching a man how to fish versus simply giving him a fish. Twice within three pages, he repeats—as though it’s breaking news—that the online investor network Kiva discloses only the average interest rate paid by its borrowers, not the actual rates. Ad nauseum, he hammers into readers’ heads the complaint that microfunds lure investors with heartbreaking photos of poor women with goats who may or may not be real—and all that in a book that’s on the short side, at fewer than 250 pages of text. If the padding were cut this might be a prime candidate for that new genre of ebooks that fall between magazine and book length.

Despite the inevitable flaws, author Sinclair and the other investigators have performed an important public service—if readers don’t come away with the wrong message.

The sad truth is that the poor whom these microfunds are supposed to help are still out there, still needing a little bit of financing to buy the archetypal goat that just might be their ticket out of poverty—or else some other, nonentrepreneurial form or assistance.

And luckily, good microfunds do exist. “The problem is neither that the entire microfinance sector is evil, nor that the basic model is fatally flawed,” writes Mr. Sinclair. As he contends, it is possible to succeed at the goal of doing well while doing good. The missing part—and this book’s message—is to do so effectively and fairly.