Confessions of an Improper Bride (A Donovan Novel) 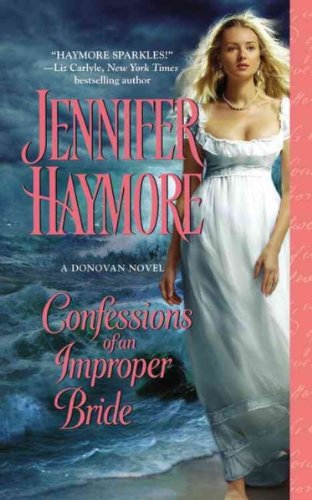 With her high-concept plots and risk-taking writing, Jennifer Haymore is the antidote for the jaded historical romance reader’s ennui.

When Serena and her identical twin sister arrive in London from Antigua for their season, they make a splash. Beautiful, foreign, identical—they have the city at their feet. Gentle Meg finds her soulmate in Langley, naval captain, but wild, impetuous Serena ruins everything by falling for the wrong man.

When caught in a compromising situation, Jonathan does not offer for her, and Serena is utterly ruined. She and Meg are sent back to Antigua in disgrace. But aboard the ship, disaster strikes, and Meg is lost forever. As penance—and to save her family—Serena is forced to assume Meg’s identity and return to London and an advantageous marriage to Captain Langley. Devastated by grief, and in utter disgrace, Serena doesn’t know what else to do, and so she agrees to the scheme, agrees to living the rest of her life as a lie.

Upon arrival in London, however, Serena struggles to keep up the facade. Langley is a good man, but Serena doesn’t love him, and she’s miserable about lying to him. She’s also miserable in her role. Meg didn’t disclose many details of her relationship, and Serena has no idea how to act—like a lover? A maiden? A friend?

But the real struggle comes when she finds herself face-to-face with Jonathan, the man who ruined her chances and her life 6 years before. Jonathan has fashioned himself into a resolute rake since inheriting the title, cultivated a reputation so depraved that even his title can’t make him respectable. The only man to stand by him is Langley, and so Serena finds the man who ruined her life in her fiancé’s—and by extension, her own—inner circle.

Jonathan made a mistake with Serena, bowing to his family’s demands rather than listening to his heart, and he’s spent the ensuing time playing up to the role of a heartless rake. The game is getting old, though, and he finds himself lonely and isolated. Meg’s return to London only compounds his miserable situation, her cool hatred of him what he deserves, but he can barely stand it.

Except, there’s something . . . off about Meg. It’s true that six years is a long time, and that the death of her beloved is sister a life-altering experience, but he can’t quite shake the impression that Meg is not Meg at all. He was always able to tell the twins apart, and every instinct he has is telling him that Serena has returned to London. And to him.

Author Haymore takes a lot of risks in this novel, not least of which killing off a very likeable character in the very first chapter. The whole premise, particularly the honorable nature of Langley and the role the heroine Serena plays in deceiving him, creates an uncomfortable dichotomy for the reader: knowing Serena’s side, her pain and her guilt, but also the awareness that she’s complicit in the deception. Though it can be hard to respect Serena, it’s easy to like her, and Ms. Haymore’s delicate touch allows a surprising amount of empathy to build toward her character and the impossible situation she finds herself in.

Jonathan’s portrayal is less convincing. Ms. Haymore works very hard to rebuild Jonathan from a spoiled younger son to a strong man worthy of love, but I remain unconvinced that readers will accept this transformation. This lack of conviction is cemented by timing behind the decision he makes to reignite his and Serena’s physical relationship, and, for this reviewer at least, it ruined the goodwill that the character had built up through the course of the novel. Jonathan begins and ends the novel looking like a child—a slave to his own selfish desires.

Characterization aside, there’s a lot to like about this novel—and even more to admire. The risks in Confessions don’t quite pay the top end dividends they could have, but there’s no question: Jennifer Haymore’s stock is on the rise.