The Confession Club: A Novel (Mason) 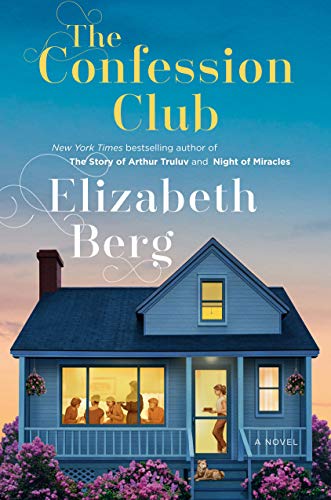 Mason, Missouri, is a typical small town where everyone knows everyone—and their business, too. But this is a place one would want to live, for you can count on your friends and neighbors when in need.

Recently divorced Iris Winters has given up her thrift shop in Boston to move to Mason to start over. She holds baking classes at the house she rents from Maddy who inherited the home from Arthur Truluv.

As a teenager, Maddy got pregnant and the elderly Truluvs, Arthur and Lucille, had taken her in, giving her care and devotion then later to her daughter, Nola, after her birth. Maddy grew to love the Truluvs and considered them more than family, though she met and married Matthew and moved to New York City.

Iris is surprised and happy when Maddy shows up with seven-year-old Nola explaining she needs a "break." She is thrilled to have them, especially Nola, for never having a child of her own, she enjoys this precocious young girl.

Joanie Benson calls Iris asking her to make Black Cake for her club meeting; a dessert filled with surprise ingredients, and Joanie had gotten the idea for this after seeing the play, The Belle of Amherst. Though this proves challenging for Iris, she's determined to fulfill her order.

Maddy accompanies Iris when she delivers the unusual concoction and the two are drawn into the group originally started as the Third Sunday Suppler Club to share meals. That later segued into The Confession Club when the female members from ages 20 to 80 decided that in addition to sharing suppers, they would all divulge their innermost secrets, embarrassments, and antics—never to be repeated outside their walls. This gathering commences as the main premise of this novel as it brings many together, and as can be expected when a bunch of women gather, their tales are hysterical, sobering, and insightful, but as it usually happens, they often go off track and hit on many other subjects. Someone may call this a "hen party."

The cake is received with great applause, and Iris and Maddy are invited to join them, which they readily agree to. After all, everyone has something they want to disclose and/or need to commiserate with others.

Maddy has an unhappy past that she can't seem to shake. This is one of the reasons she needs a "break" from her husband. She does not want him to see her frailties and believes he can do better with someone else.

"And then, to make matters worse, she called her father last night to set up some time with him, and though he pretended to be glad, Maddy knew that he wasn't. She feels he will never get over blaming her for her mother's death, which happened just after Maddy was born; it's as though he can't separate the two events. 'I can't help my feelings,' he told her once when she was still in high school, and she remembers thinking, But you can help your behavior.

"Things didn't get much better when she got pregnant by a guy who couldn't dump her fast enough, nor did they improve after Nola was born. And then after Maddy got married and moved to New York, the two of them became even more estranged. . . .

. . . "If there's anything Maddy learned after Arthur and Lucille took her in as a pregnant teenager, it's that families don't have to be biological. She finds it hard to let go of the notion that you should matter to your father, though."
Maddy is not the only one wrangling with torn emotions. Iris misses the life she had with her ex, and the family they could have shared together. Sometimes she believes she is totally alone and wonders where life will take her next.

One day, John, a 60-something homeless Vietnam vet suffering from PTSD shows up in town. Iris meets him and is intrigued by him, and she visits him often as the abandoned farm, where he is squatting. She is surprised her feelings for him are unlike any she's ever had for anyone else. John confides in her about his experiences in Vietnam, his destroyed marriage, living on the streets, and the need to feel free. Their friendship intensifies, and Iris falls in love with him. But could a lasting relationship work with a man who is plagued by so many demons?

The Confession Club, book #3 in the Mason series, stands well on its own, though some characters from the two previous editions are reintroduced, so the reader may want to catch them if they have not already done so. Maddy, Iris, and John, keys to the plot, are so down to earth and likable as are the secondary players, so it is easy to commiserate and appreciate the problems, foibles, and personalities of those of all ages, making this a well-rounded read offering a lighthearted break from everyday concerns by highlighting that no one is truly alone.