Conan Doyle for the Defense: The True Story of a Sensational British Murder, a Quest for Justice, and the World's Most Famous Detective Writer 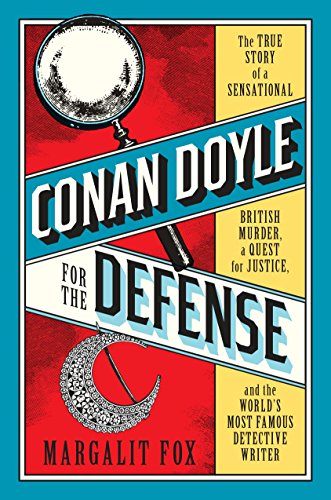 What happens when the world’s greatest mystery writer is asked to solve a real murder? Not exactly what you would expect.

In 1909, after being wrongly accused of bludgeoning Gilchrist and stealing her jewelry, Oscar Slater, a Jewish n'eer-do-well, was tried and convicted of the crime and nearly hanged. His sentence was commuted to life in prison, at hard labor, just 48 hours before his scheduled execution.

Conan Doyle was convinced, almost from the outset, that police and prosecutors were determined to frame Slater. In the absence of any physical evidence, authorities instead relied on—and manipulated—vague, contradictory, unreliable (and likely perjured) eyewitness testimony. Why? Because, as a Jew, a German immigrant, and a shady character earning his living as a gambler, fence and possibly a pimp, Oscar Slater conveniently represented the Edwardians’ feared “Other.”

A physician before he was a mystery writer, Conan Doyle would seem to be the perfect candidate to act as his own Sherlock Holmes in trying to clear Slater, and free him from his long prison sentence in a bleak, windy penitentiary on the Scottish coast.

“Where today many wrongful convictions have been overturned through DNA analysis,” Fox writes, “Conan Doyle managed to free Slater with little more than minute observations and rigorous logic – precisely the kind of brainwork that had made his hero famous. . . . [the Slater case] is a study of the singular method of detection that Conan Doyle used in the Holmes stories . . . His published accounts and archived letters on the subject reveal a modus operandi that is truly Holmesian.”

A critical theme that runs through this engrossing book is the similarity between medical diagnosis and criminal detection.

“If you want to solve a crime, better call a doctor—better still a doctor who is a crime writer,” Fox writes. “Detection, at bottom, is a diagnostic enterprise: like many Victorian intellectual endeavors, medicine and crime-solving seek to reconstruct the past through minute examinations of clues.”

And yet, Conan Doyle knew the pitfalls of trying to live up to his fictional paragon, apart from elevated, if not insurmountable expectations. When it comes to murder, fact and fiction are quite different.

“It is one thing to grapple with a practical problem and quite another thing when you are allowed to solve it under your own conditions,” Conan Doyle cautioned.

In 1912, Conan Doyle published The Case of Oscar Slater, an 80-page book—sold for pennies to increase its circulation—which systematically demolished the prosecution’s case. But despite his fame and genius, “his book had little immediate effect,” Fox writes, “and Slater remained where he was.” It would take Conan Doyle more than fifteen years to free him in 1927.

One of the first things the celebrated writer learned in his frustrating, real life foray into crime detection was that some things never seem to change.

“‘The trouble . . . with all police prosecutions,’ Conan Doyle remarked with caustic lucidity worthy of Holmes, ‘is that, having once got what they imagine to be their man, they are not very open to any line of investigation which might lead to other conclusions.’”

That is as true today as it was more than a century ago.

As Fox reminds us, Holmes was drawn on Conan Doyle’s legendary Edinburgh University Medical School professor. Joseph Bell was a master of deductive reasoning and the use of observation, as well as of forensic science, who frequently assisted the police.  Bell reached a similar conclusion about the authorities.

“The fatal mistake which the ordinary policeman makes,” Bell wrote, “is this, that he gets his theory first, and then makes the facts fit it, instead of getting the facts first of all and making all his little observations and deductions  until he is driven irresistibly by them…in a direction he may never have originally contemplated.”

In a way, Fox believes, the campaign to free Slater was the Scottish version of the effort to free Capt. Alfred Dreyfus in France during the same period (a comparison Slater also embraced). But Dreyfus was a much more dignified and noble victim, and thus easier to defend and to build public support for. If anyone, Slater more closely resembles the hapless, marginalized Mendel Beilis, who was accused of blood libel in Russia in 1911. Beilis, freed after a worldwide campaign, was the model for Bernard Malamud’s novel, The Fixer, which was later made into a movie.

Fox gives us a vivid portrait of Slater, largely through his letters from prison, and after.

“We see a thoughtful, soulful man struggling to hold on to his faith in a place where for much of the time he was the only Jew,” she writes. “We see a man torn between the need to resign himself to his fate and the need not to abandon hope altogether.”

However, Fox also relies a good deal on secondary sources, especially previous books on the case, in her entertaining retelling. For some readers, Fox’s extensive, sometimes laborious discussion of the history and development of Victorian and Edwardian crime detection may feel like term paper-ish padding, interrupting the narrative.

Ultimately, freedom and vindication would take a smuggled-out letter from the imprisoned Slater to Conan Doyle in the 1920s; a new book and newspaper expose by a committed journalist, supported by Conan Doyle; and recantations by two eyewitnesses.

Almost all of Conan Doyle’s work on the Slater case took place at a Holmesian remove. He sent Slater a single letter while he was in prison, and they met face-to-face only once, after Slater’s release in 1927.

Unfortunately, Fox writes, despite the mystery writer’s best efforts, Slater’s story “ends in what Conan Doyle called ‘a painful and sordid aftermath.’” This included bitter recriminations between the two men, and even the threat of a law suit over money used for Slater’s successful appeal.

If Oscar Slater did not kill Marion Gilchrist, who did?

On this point Fox says she remains “resolutely agnostic,” although like Conan Doyle and other investigators, she strongly suggests several candidates. This is never a satisfying conclusion for true crime aficionados, so in that respect at least, the game is still afoot.