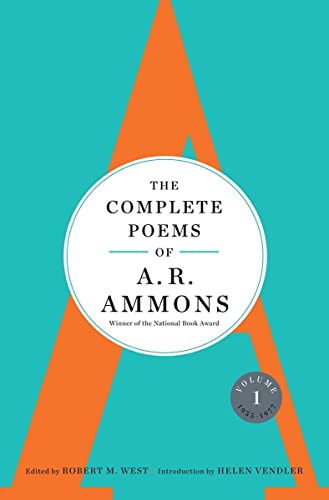 “The sheer heft of the two volumes only hints at the vast poetical output of Ammons, a variegated array of poeticules and epics, intimate confessions and scientific hymns, wordplay and wonderment.”

Sprawling, microscopic, word-drunk, pro-science, cerebral, intimate. A smattering of words to describe the massive poetic output of Archie Randolph Ammons (1926–2001). Encased in two hardcover volumes for a total of more than 2000 pages, The Complete Poetry of A. R. Ammons chronicles the works of “one of the greatest poets of the twentieth century,” according to Helend Vendler’s Introduction. Ms. Vendler elucidates further, saying, “He became a writer of Whitmanian amplitude and excess, . . . defin[ing] himself explicitly as an American poet writing of American places and American people.”

The Complete Poems debuts as Roger Gilbert of Cornell University is writing “a stirring comprehensive biography of Ammons.” Vendler provides a thumbnail biography of Ammons, his importance to American literary history, and his poetic achievement.

He grew up poor in Whiteville, North Carolina, and was raised “in the charismatic Pentecostal Fire-Baptized Holiness Church,” which he later abandoned. The childhood claim about his house containing three books (the Bible and two others) along with “eleven pages of Robinson Crusoe” sounds apocryphal or the substance of self-mythology. Yet the grain of truth shines through in Ammons’ poetry.

Ammons spent time in the Navy in the Pacific theater, but also kept a journal to, among other things, “amass vocabulary lists.” He enrolled in Wake Forest University thanks to the GI Bill and worked at a scientific glass company in New Jersey. He was a “working poet.”

Other working poets who influenced Ammons’ work include Wallace Stevens, who worked as a lawyer for an insurance company, and William Carlos Williams, a doctor. Working for the scientific glass company infuses Ammons’ work with technical, biological, botanical, and zoological terminology. His work can be read as pro-science and pro-literary without the least hint of contradiction. The poetry tears down the artificial barriers set up between the worlds of STEM and the arts.

Ammons’ work reveals a constant wonderment at the natural world and its scientific underpinnings. His book-length poem Garbage (1993) revels in the operations of decay and decomposition while simultaneously glorifying language’s beauty, randomness, and absurdity. Ammons dedications reads “to the bacteria, tumblebugs, scavengers,/wordsmiths—the transfigurers, restorers” (Italics and no period in original.) Written in long stanzas of couplets, he offers his vision of the world.

“garbage has to be the poem of our time because

to get our attention, getting in the way, piling

up, stinking, turning brooks brownish and

creamy white: what else deflects us from the

errors of our illusionary ways,”

Like Anthony Burgess or Alexander Theroux, his writing radiates a lust for language, word-drunk on the infinite capaciousness of English. While Garbage would go on to become a landmark poem, he pokes fun at its own self-importance, calling it “the poem of our time.” Ironically, Garbage would later win the National Book Award for Poetry in 1993. Ammons was a multi-award-winning poet, including winning the prestigious Bollingen Award in 1975 for Sphere.

Ammons became the master of the modern epic, deflecting and reflecting the moderns like The Cantos by Ezra Pound and Paterson by William Carlos Williams. Besides the sprawling excessive epic, Ammons could whittle poetry down to its elementary particles. He could create marvelous poeticules (similar to Samuel Beckett’s micro-minimalist dramaticules):

Divided into two volumes, The Complete Poems bifurcates Ammons’ work from 1955 to 1977 (Volume 1) and from 1978 to 2005 (Volume 2). Each volume has a preface by Robert M. West, a professor of poetry and literature at Mississippi State University. Mr.  West offers comprehensive notes for the work of Ammons, a poet with a penchant for neologisms, archaic terminology, and an idiosyncratic approach to spelling and grammar. The editorial tasks offered numerous challenges, especially deciding whether an odd spelling was the original intent of Ammons or a typographical error.

The Complete Poems is a landmark publishing event along with offering poetry fans a convenient two-volume set for Ammons’ work. Individual books remain rarities, even in used bookstores. The only criticism, albeit minor, for Complete Poems is Helen Vendler’s Introduction. Not the Introduction itself, but using the same Introduction for two volumes. It seems peculiar in this arrangement, especially since Ammons is such a revered figure among contemporary poetry and American literature in general. Someone could have written something else (not necessarily another introduction) for introductory material in the second volume. It seems frivolous and nitpicky to focus on this, but the same introduction copied twice seems like a waste of paper.

Apart from that redundancy, The Complete Poems of A. R. Ammons is a magnificent production, the minimalist cover designs by Helene Berinsky giving the two volumes an authoritative quality. The first volume has a giant capital A, the second an R, with each cover reversing the color scheme (orange A, blue background; blue R, orange background). The sheer heft of the two volumes only hints at the vast poetical output of Ammons, a variegated array of poeticules and epics, intimate confessions and scientific hymns, wordplay and wonderment.