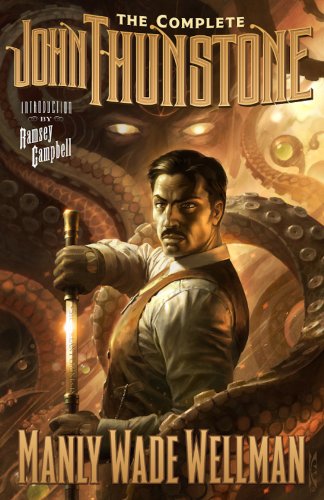 “Nearly forgotten today, Mr. Wellman was nominated for a Pulitzer. . . . a worthy chapter in the timeline of fiction devoted to the supernatural.”

Great pulp magazines featured jungle adventures, science fiction, detectives, zombies, voodoo, horror, westerns, heroes, history and just about any genre of literature imaginable. The Shadow, Tarzan, John Carter, Zorro, and Doc Savage may be the most famous characters to emerge from the world of pulps, but pulp literature was filled with characters just waiting for a new generation of readers to discover them.

Created by folklorist and author Manly Wade Wellman and first appearing in 1943 inside the pages of Weird Tales, John Thunstone is one of those great heroes waiting for rediscovery.

Weird Tales was a pulp devoted to the occult, horror and unbelievable. Its pages were filled with vampires, zombies, evil wizards, and magic. Steeped in mythology, filled with the knowledge of the arcane and as ready to fight with his fists as he was with his mind, John Thunstone walked tall in the world of magic.

As Ramsey Campbell points out in his introduction to this collection of all of Wellman’s Thunstone stories and novels, the character is part of a long tradition of “psychic investigators.”

While he is indeed connected to this long-standing tradition, Thunstone is also a character capable of easily defending himself or fighting back. His figure is cut from the same cloth as Tarzan and Doc Savage. He is dashingly handsome and large. In one case a phone booth is described as “. . . coffin-snug for his huge frame.”

Fighting comes with the territory and usually a vital part of any adventure pulp hero. Unlike many others who earn their reputation with their fists, his physical skill nicely balances his sensitivity to and understanding of the spirit realm.

Carrying a silver sword cane and in a tuxedo he could be found in the best hotels and nightclubs as well as the trashy, neglected worlds of the forgotten. Thunstone is well versed in the lore of the supernatural and fought hard against the evil found at the heart of those who would misuse or misrepresent magic.

Created by Mr. Wellman in 1943 the character of Thunstone shares the supernatural genre with such modern creations as Hellboy, Kolchak, Hellblazer, and even The X-Files. For Thunstone is as much part of that long literary line as any of them.

He takes on vampires, wizards, the undead, magic, and paranormal activities with relish, often exposing them for what they really are or walking away when he knows that there are certain ideas that cannot be ultimately explained.

This wide-sweeping knowledge of the interconnecting nature of the way stories evolve leads a series of strikingly original creations inside the Thunstone stories.

That breadth of Mr. Wellman’s knowledge of folklore continually influences the Thunstone series. In the early story Hoofs Thunstone’s greatest opponent, the wizard Rowley Thorne (a character considered to be based on Aleister Crowley), tempts the widow of a rich man by telling her that her husband’s soul is trapped inside a small crystal horse.

When she questions him about the presence of a man’s soul inside an animal, Thorne reminds her of the importance of horses in myths across cultures. “There have been horse gods in Norway, Spain, Russia, Greece, even in tropical America. When German wizards foretold the future, they read it the blood and bowels of horses.”

Even slight details such as the way Mr. Wellman casually drops a mention of “The Equine Cult of Aradonia” have the air of incredible authenticity. Most authors would build a story around such a concept. But Mr. Wellman was such a strong and imaginative writer that he could pepper his work with such beautiful little ideas and never need to come back to them.

Mr. Campbell’s introduction also notes Mr. Wellman’s ability to create “supernatural beings that fell absolutely rooted in the folk traditions he loved.” A point driven home by Mr. Wellman’s inspiration for the fictitious tribe known as Tsichah tribe. One of whom, Lone Star, exemplifies Thunstone’s tight relationship with the right side of the universe.

He also ties Mr. Wellman’s work into myths and reoccurring motifs both inside and outside of the supernatural genre. Mr. Ramsey speculates (with a good degree of certainty) that a part of the later novel “What Dreams May Come” quietly holds “a strange echo in the tale of Tom Thumb . . .”

Mr. Wellman was a prolific writer who could easily cross into different formats. For comics he wrote Blackhawk, The Spirit (when Will Eisner was in the service during the War) and Captain Marvel. His use of returning characters or villains such as Thorne villains is strong part of both pulp and comic book traditions.

Nearly forgotten today, Mr. Wellman was nominated for a Pulitzer. He also famously beat out William Faulkner for an Ellery Queen Mystery Magazine Award, an event that left Mr. Faulkner a bit uncomfortable. . . .

This entertaining and memorable collection reminds why Mr. Wellman was so honored in his time. He writes with a subtly that never forces the action on the reader, but lets them discover it for themselves. Like the best of storytellers he grounds his work in the real while simultaneously removing us from it.

Beautifully illustrated by artist Raymond Swanland and George Evans, The Complete John Thunstone is a worthy chapter in the timeline of fiction devoted to the supernatural. Like the best of that genre, the character also walks in a second world. For like Doc Savage and The Shadow, Thunstone is a man who actively seeks out adventure and has no problem confronting evil when it appears.