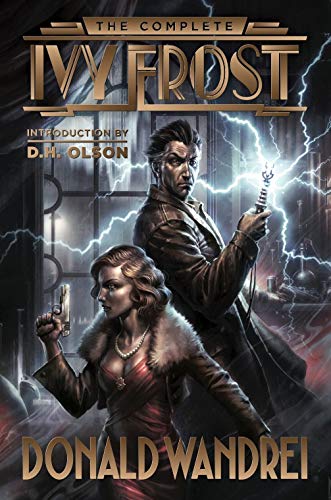 There are two stories being told inside the new Haffner Press anthology, The Complete Ivy Frost by Donald Wandrei. The first is the discovery of a real rarity. Ivy Frost is a nearly forgotten hero from the thirties who legitimately deserves our full-fledged attention and discussion in the modern era.

The second story is that of a writer racing to find his personal equilibrium during one of the most exciting and action-packed periods of publishing history: New York City in the thirties.

In addition to his own writing and prior to the introduction of Ivy Frost, Wandrei had formed serious friendships with H. P. Lovecraft, Clark Ashton Smith, and others in the field of pulp writing. Restless and in love with the form, he would hitch-hike to meet those he corresponded with in person. A founder of Arkham House, a firm dedicated to preserving the works of H. P. Lovecraft, Wandrei was both a professional and a respected fan of great writing.

By 1934 Wandrei had already published in Weird Tales and other pulps of note. In his introduction, D. H. Olson, who also knew the writer personally, does an excellent job of creating a feel for the wanderlust of Wandrei’s years prior to the creation of Frost.

His name made by his ability to work the weird side of the pulp street; Wandrei was approached by a couple of editors at Street & Smith Publications. Home of The Shadow, the company understood the importance of having long-term, repeating characters that could branch out into other areas such as radio and movies. The company understood the marketplace.

Wandrei worked up an idea and, in tandem with his editors, Professor Ivy Frost was born an alchemic amalgamation of Sherlock Holmes, Doc Savage, and The Shadow with a touch of the Green Lama weirdness!

Of course, Frost was nothing without his shapely, curvy and attractive assistant Jean Moray. While Wandrei never fails to remind the reader of her spectacular assets, the character is one of the strongest, most intelligent and amazingly resourceful “sidekicks” you could ever find in a pulp.

These characters are men and women of their times. They reflect the city of New York in the same way that Fred Astaire and Ginger Rogers did in 1938 film Carefree. It is clearly a man’s world.

That said, it’s the action and adventure of Moray’s involvement that often moves the stories forward at their most brisk and exciting pace. Fully dimensional, especially considering the times, her interactions with the actress April in the story The Lunatic Plague are hilarious.

But it is the split-second race away from a hail of machine-gun gunfire while struggling to cover two people, one unconscious, with Frost’s invention of a bullet-proof cloak, that sets your heart racing!

It is easily as frantic and breath-taking as anything that Walter Gibson ever gave Margo Lane to do in The Shadow! Over at Operator #5, Jimmy Christopher wasn’t utilizing Diane Elliot or his twin sister Nan in the way the Frost relies on Morey.

Frost debuted to great sales in the November 1934 issue of Clues Detective Stories. By the fourth issue, there were talks of radio, books, even movies. However, the times and public taste were starting to move against Wandrei as well as Street & Smith itself.

In that hard-scramble world of New York City streets, pulps were more known for their lurid, exploitative stories and illustrations than they were for family friendly heroes. At the time pulps were considered the adult material of the day. Some covers were so salacious that they had to be kept under the counter.

In 1933 Fiorella La Guardia had campaigned on the idea of cleaning up the streets of NYC. There was of course, Tammany Hall etc. In essence he also put a dagger in the world of pulps. His crackdown setting the stage for the next step in the world of heroic literature, Superman and the world of four-colors!

By 1936 the excitement of Ivy Frost had hit a plateau. Wandrei’s creative attention had turned to the stage. He was also distracted by the passing of Lovecraft and establishment of a house devoted to that writer’s works.

In The Complete Ivy Frost, Haffner Press has brought the entire 18 story run into print for the first time ever. Throughout Wandrei’s energy is palpable as he seems to be writing at such a furious pace, with so much action and adventure falling from his brain, that the paragraphs often burst at the seams with ideas.

In previously mentioned The Lunatic Plague he writes of a series of people who have inexplicably, each deliberately performed embarrassing stunts in public. Sometimes resulting in their own death! Most writers would list three, maybe four incidents at the most. Wandrei seems to be having so much fun with the concept that it just tumbles on and on out of pure energy.

Wandrei also had skill at creating minor characters that seemed to always be well-worth the reader’s time. From a bus station manager to a general clerk, he gives life to each voice.

These are stories of infinite excitement written in an occasionally hurried manner with an understanding of the importance of magic and a deep, deep respect for science. Frost never fails to explain the world, and his reasoning, often in captivating detail!

The Complete Ivy Frost, with beautiful cover art by Raymond Swanland, shines a bright spotlight on a hero and cast that deserves this time. Prior to this compilation the only way to find the character was in an eight-story collection published 20 years earlier.

Haffner Press has elevated Ivy Frost to the exact spot he belongs, near the top of the pulp world, just about two years before Superman blows up printing presses everywhere. These stories, nearly a hundred years old each, are still absolute fun for everyone.