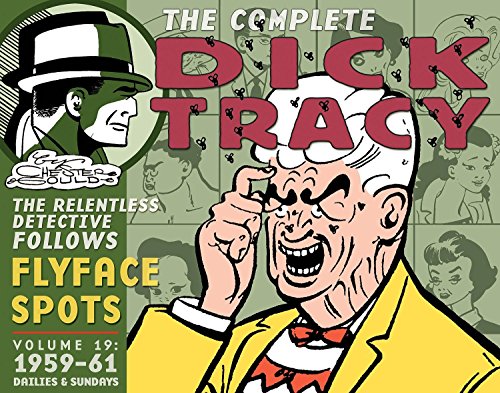 The hat is sharp, built of perfect angles and straight lines. It sits atop his head in flawless balance to the mathematical precision of the angles on his face. His chin is razor-sharp and his eyes seem permanently squinting in concentration, as if life had no other delights, no focus, no purpose, other than capturing a criminal.

On his arm is a two-way wrist radio that helps him keep in touch with others on his team. Even in 1959, the device was technological dream of the far distant future.

For many of the time who read comic strips, Dick Tracy is the perfect policeman. Authoritative, respectful to citizens, and flat-out tough on criminals and their ilk, he grew so popular that, after his debut, his first name came to be slang for an officer for a generation of readers.

Complete Chester Gould’s Dick Tracy Vol. 19 is The Library of American Comics newest collection in the complete run of Dick Tracy comic strips. By this time Chester Gould had been drawing and writing the hard-nosed cop for close to 30 years. The character was still one of the most popular strips in the medium.

Always vigilant, devoted to his team and those he loves, Tracy was also never afraid to offer a hail of bullets in response to a crime. That violence was a big part of the appeal in the strip. As was the absurdity of Gould’s sense of humor. His villains such as Flattop and Mumbles were laughable in appearance or behavior, but very, very deadly in between the panels of a story.

His tough-nosed stance on crime was in many ways a precursor to the idea of Dirty Harry in the seventies. Tracy was the first regular media entity to show readers what was actually involved in police procedurals and fighting crime. As seen in this new collection, Gould kept Tracy ahead of technological innovation by including new inventions or advancements such as a small, pen-sized tape recorder that could be hidden inside a teakwood carving.

Gould often included diagrams of how the devices worked. In a 1960 storyline centered in Hawaii collected in this anthology, Gould included the diagram of the miniature tape recorder at least five times over a weekly and Sunday run of strips.

Few comic strip artists could pace a strip like Gould could. He was a strong draftsman who drew with economy and yet, when he needed to, filled his strips with beautiful detail. He was also a master of one of the long-forgotten staples of early twentieth-century art, silhouettes. It wasn’t a trick he went to often, but when he did, the drawings often crackle with electricity and urgency.

In a Sunday strip dated February 28, 1960 (the same Hawaii story), he opens with a close up panel showing the teakwood tape deck. As the Sunday page moves on he takes us between the figure and Tracy’s associates, giving them a close-up as needed.

Then, in the second to last panel, he moves from the intimacy and shadows of the meeting to a bright street corner in Hawaii. The building he shows us has a detailed and ornamented entryway with parked cars on one side of the building, and a few palms on the other. At the bottom he has placed the word meanwhile in a scroll, as if a movie serial was unfolding before us.

The Hawaiian story, possibly the highlight of this collection, also shows how much Gould paid attention to modern trends as the story seems to be written to capitalize on the then-current trend of Tiki Bars.

The two way wrist radio, introduced in 1946 and becoming a TV in 1964), may seem antiquated as you grab your cell phone to text, but it is one of the great inventions in adventure strips. As important to Tracy as the back packet rocket is to Flash Gordon. For at its heart, despite Tracy’s strong ties to family and community, Tracy was as much an adventure strip as Gordon or Prince Valiant ever were.

As good as he was, this is a period that finds Gould occasionally going off of the rails. In his introduction author Max Allan Collins, who took over the strip when Gould retired in 1977, takes an honest look at Gould’s failings during this run.  Collins points out that Dick Tracy is not the place to go for modern political correctness. He also notes that, with Tracy such a commercial success, Gould may have been looking at anything he created during this time with an eye towards merchandising. During a few of the stories inside this volume Gould drifts perilously close to allowing Tracy to becoming his own Fearless Fosdick, the Tracy parody created by Al Capp over in Li’l Abner.

As violent as the strip was, as much as it showed us about life as a cop, Dick Tracy had one of the most stable supporting casts in comics. Few heroes in comic strip were married, much less had children.

The collection features the last traces of the original Tracy. For 30 years he had been a storytelling as well as marketing juggernaut. By 1964 Gould was moving the strip into space as Tracy and the gang head for the moon. By the end of that year Tracy’s son Junior would marry an alien.

Good or bad, Gould’s absurdist take on criminals, the way he wrote prose, the way he portrayed machines and the way he showed us Tracy and his family, is timeless. The fact that Tracy was (and still is) a very popular strip, shows us how strong and frighteningly original Gould’s original work was.

Dick Tracy was a rarity, an adventure strip with heart and downright hilarious humor at its center. A winner all the way ’round.